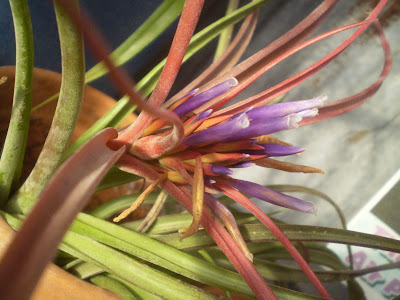 Posted by mr_subjunctive at 2:30 AM 1 comments

I can't answer your e-mails. I've tried. They get bounced back to me.

Posted by mr_subjunctive at 1:34 PM 0 comments 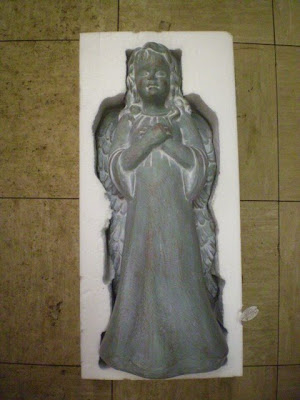 The flower shop asked me to take this photo a couple weeks ago. This is an Isabel Bloom figurine, or statue (is it still a "figurine" if it's two feet long?), or whatever, that they were unpacking, and something about the hands folded over the chest and the form-fitting styrofoam block struck them as amusing. They have senses of humor over there.

I don't know whether Isabel Bloom is well-known in the gardening world; work is the only place I can think of where I've seen her stuff, and I don't recall hearing it mentioned on the other garden blogs. Though in fairness, I've only actively searched for it once in my life, today when I was hunting for the website, so I wouldn't really know.

This got me to thinking, though: why not styrofoam coffins for real? I mean, it's waterproof, longer-lasting than wood, cheaper to make and transport, potentially made from recycled materials, gentler on the pallbearers, and easy to claw your way out of if you were accidentally buried alive or became a vampire, which is an important but oft-neglected consideration. (Imagine how many vampires are out there right now, killing time in their coffins waiting for the wood to rot: that's got to be kind of boring.) Plus it would protect against shipping damage. I'm sure St. Peter (or whoever has his job, but in Hell) would appreciate that. Granted it's not the most attractive material, but you could cover it with a wood veneer of some kind easily enough.

It would not a good choice to bury in areas subject to heavy flooding or erosion, obviously. I'm intrigued by the mental image of a thousand eight-by-five-foot, corpse-filled styrofoam blocks bobbing along atop raging floodwaters, but there are probably solid public sanitation arguments to be made against it. I dunno. There's a good idea in all this somewhere, I'm just positive.

Posted by mr_subjunctive at 2:30 AM 6 comments

Two things today. One, I mentioned in the profile for Vriesea splendens that although they form offsets after blooming, like most other bromeliads, they're rumored to produce only one per plant. My plant at home has begun to grow an offset, and it looks like I will indeed get only one: 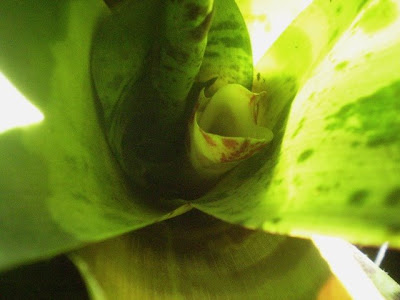 I mentioned in the original profile that with some plants (Aechmea fasciata and Guzmania lingulata among them), removing pups seems to encourage the production of even more: this is not likely to work with Vriesea splendens, since there's no easy way to remove a pup from the center of the rosette without wrecking the parent. So you may as well just let the plant do what it wants to do, and hope for twins.

I also mentioned in that profile that the closest relatives of the Vriesea genus are thought to be the Tillandsias, and that this isn't immediately obvious just by looking at them: a lot of Tillandsias are air plants, the small epiphytes with thin, stiff, grayish leaves, while Vrieseas tend to be much larger, greener, and broader. The resemblance is mostly observable in the flowers, and the flattened-bract arrangement of some of the Tillandsias: compare the pictures below. The colors change, but the shape and structure looks mighty similar: 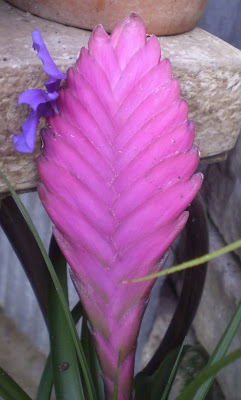 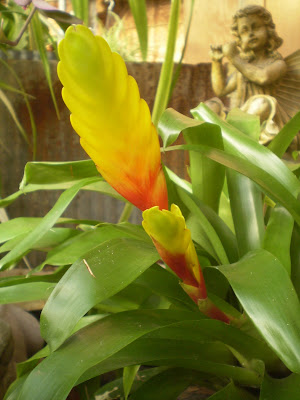 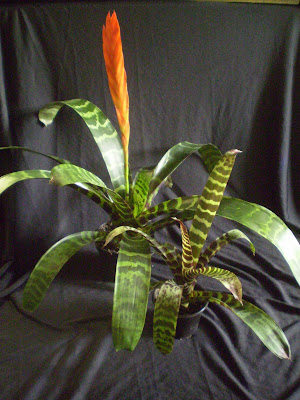 Vriesea splendens inflorescence.
This is not a universal bract arrangement for Tillandsias, as you know if you've followed the posts about Tillandsia blooms, but the fact that these few plants have similar-looking flowers makes it at least believable that they're related. 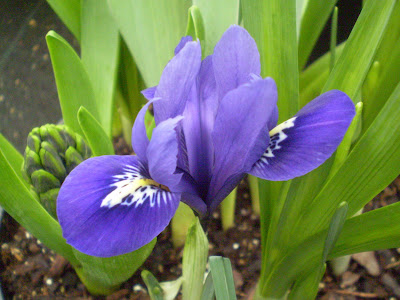 More forced spring flowers. As usual with pictures involving blue or violet flowers, the actual color is very different from this (darker, purpler).

I don't remember Irises being involved in these plantings last year; maybe our supplier has diversified. Or maybe (more likely) I'm just not remembering last year very well. It was a little traumatic in spots. Maybe I've blocked it from my memory.

New category (borrowed) for PATSP today. Jasdip posted this picture to Garden Web (on this thread) a while back (on 12 Jan. -- there was a backlog of posts to put up before we got to this one), and I thought it was cool. It will be interesting to see if there are follow-up pictures about the flowers once they open. 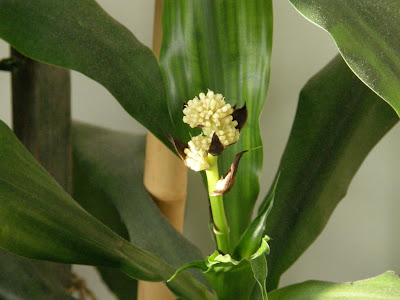 Open in new window for a much larger picture.
From what I've read and experienced about other Dracaena flowers, the follow-up post may be about jasdip's tragic asphyxiation via Dracaena perfume. I don't think D. deremensis 'Janet Craig' are supposed to be as bad on that count as D. fragrans, but even so. Could be pretty intense.

Posted by mr_subjunctive at 2:30 AM 17 comments

I'm not sure if it's just that I've completely lost track of what time of year it is, or if Ceropegia woodii (string of hearts) just flowers intermittently year-round, but it's doing it again, and I wasn't expecting it. 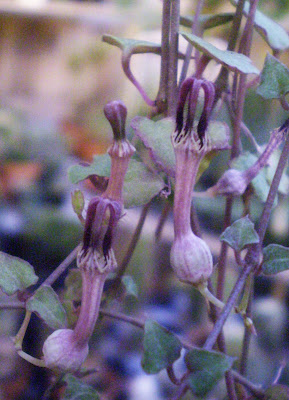 Then there's this older picture (from October), of the actual seed pods, though the seed pods kind of disappeared at some point during the early winter and I'm not sure where they went or who was responsible. WCW was reworking some of the Ceropegia hanging baskets at one point; maybe she did something with them. 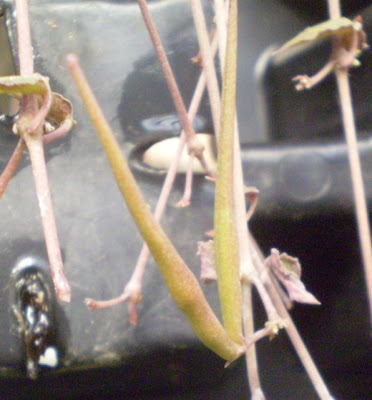 I'm not a particularly big fan of the plant; it usually strikes me as being a little sparse. Which is to say, I'm not opposed to the plant per se, but I don't very often see any that I consider presentable. Which in fairness could be my problem, not the plant's. 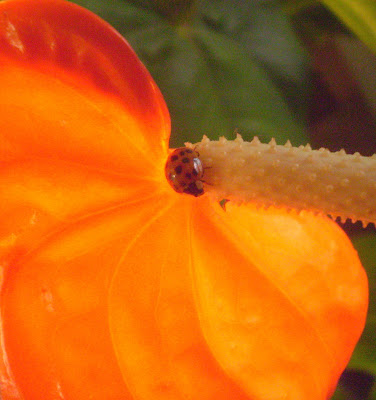 Some years, when fall arrives, the apartment fills up with boxelder bugs (Boisea trivittata), and then in the spring we find little piles of them, dead, in front of all the windows and near the plant lights. Other years, 2008-09 being one of them, it's not so much boxelder bugs as ladybugs, but the story winds up being basically the same. Once it gets cold out, the boxelder bugs pretty well stay put (or they're already dead, or whatever), but the ladybugs wander all over the place for the whole winter. God knows what they're surviving on, food-wise. I'm pretty sure it's not aphids. There was one that I'm pretty sure went on a mouthwash-drinking bender: I kept finding it near, or on top of, a particular drop of spilled mouthwash on the bathroom sink, for the better part of a day, and when blown on moved very slowly and unsteadily in no particular direction. A stumbling-drunk ladybug? Sure looked like it.

Maybe it was unsteady because it had been poisoned by the mouthwash and was dying. Hard to say.

But so anyway. This one I found on the Anthurium flower ('Florida'), and it hung out there for at least several hours. It was hard to get a picture, because whenever I got close with the camera, it would crawl to the other side of the spadix, but eventually I got it. The spathe is a weird glowy orange because it's being lit from the back by a fluorescent light, though it's a very luminous orange even when not backlit.

There are/were other Anthuriums in bloom at the same time ('Pacora,' which is red, was very close), so it's not inconceivable that the ladybug may have visited other plants and accidentally pollinated something for me. It'd be a long shot, but it's not literally impossible. Which would be cool.

Posted by mr_subjunctive at 2:30 AM 1 comments