This picture is from last Sunday (30 June). We were coming back from a trip to Fairfield, and stopped just north of Brighton, in a public area for people to launch their boats into the Skunk River. There's a former bar (now apparently a house) along the road to the launch site, and a dog who lives there saw Sheba go by in the car and followed so she could introduce herself. 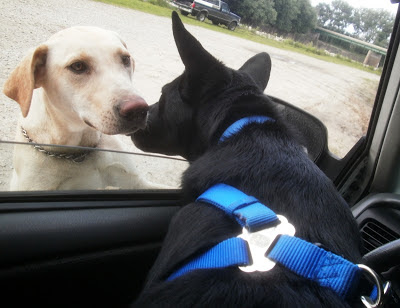 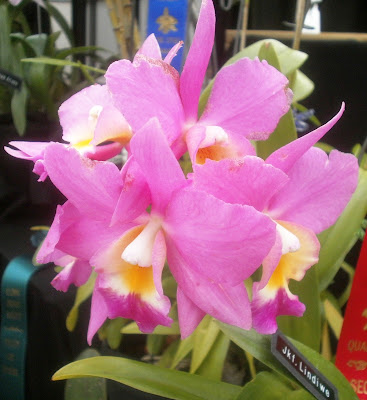 Things have been really busy for the last few days, Sunday in particular, so there isn't much to blog about, and what there is isn't anywhere close to being ready to post. 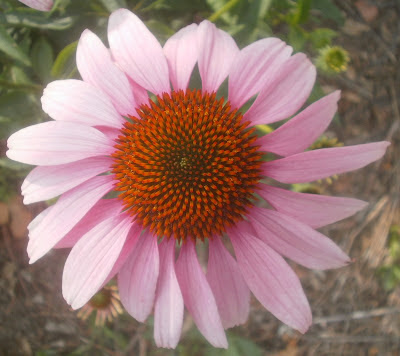 I'm not thrilled about the situation, but things are what they are. Meanwhile, the Echinaceas are blooming. Not our Echinaceas: we don't have any. But everybody else's. You know what I mean.

Flies in (and out of) Drag

Because of the recent and ongoing ruckus about honeybees and colony collapse disorder, I've been watching carefully for honeybees on the various flowering plants we've got outside this year. So far, not a one, though that might just mean we're not growing anything they find appealing.

There are plenty of other insects to look at, though. A few are even bees. They're just not honeybees. 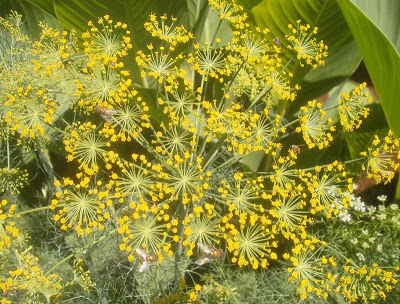 Is there any plant that looks more like fireworks than dill does?
We sowed some dill seeds this year, because I was hoping to get swallowtail caterpillars and/or butterflies (also I just really like dill pickles, so now I can smell them all the time). Nothing so far, but I don't have much of a grasp of when swallowtail butterflies are supposed to be in Iowa in the first place.

What's appreciating the dill instead are mostly green bottle flies (Lucilia sericata). Which I suppose I don't mind, since nobody else was using it, and bottle flies do have their positive qualities, but this was hardly the original plan.

I should probably also note that we've used the dill once, in cooking. Turns out that there is in fact such a thing as too much dill.

The cilantro (Coriandrum sativum) that came with the house keeps popping up here and there; it's gotten moved at least two times so far, but every year, enough seeds manage to survive to keep the population going. We haven't done any cooking with it, despite having had it around for four years: I'm not particularly a fan (though I can understand why people could be), and really my main interest in it is visual: the clouds of little white flowers appeal to me. 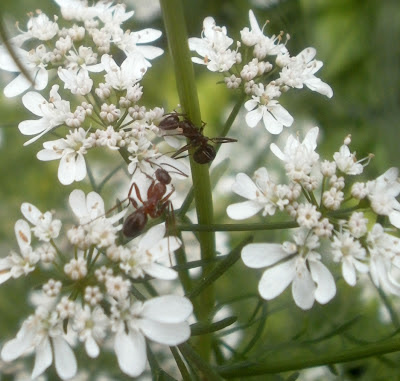 "Morning, Ralph."
"Morning, Sam."
They're apparently also appealing to ants. I really like that picture. Something about their posture, or something. 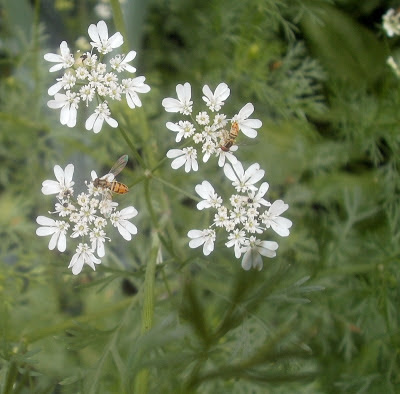 Flies are also really fond of the Coriandrum flowers. I don't know what species this is, but they are everywhere this year. I see them all the time on the marigolds and Portulacas as well. I don't know the ID; I haven't even been able to come up with a general ballpark guess on an ID. They're flies of some kind, and that's as much as I can tell you.

Sometimes, I don't even know that the insects are there, when I take the picture. Like, I didn't see this until I uploaded the pictures to my computer: 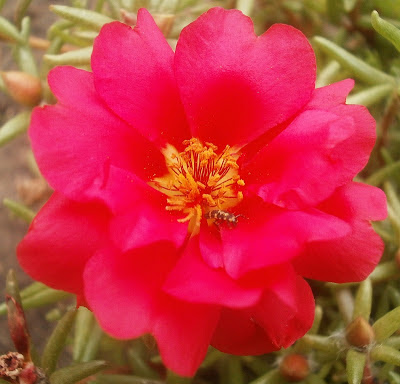 Oh, what a nice picture of a flower OH MY GOD WHAT IS THAT FUCKING THING GET IT AWAY GET IT AWAY GET IT AWAY.
After some searching on-line, I've tentatively identified this as the larva of Coleomagilla maculata, the spotted lady beetle. This could be better news: C. maculata is allegedly capable of surviving almost entirely on pollen, so it's not necessarily helping me out that much with insect pests. Not that I've seen much in the way of insect pests this year. (A few whiteflies. No pictures of those yet.) 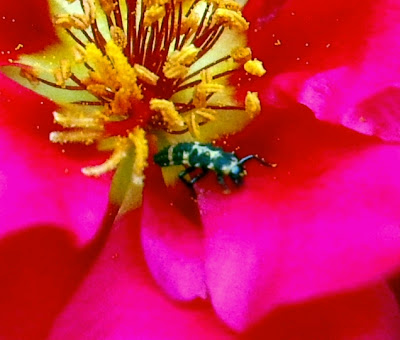 OTHER WAY! GO THE OTHER WAY!
There is at least one actual bee so far this year; I don't know which one it is. (I tried looking it up, but there are so many tiny bees in Iowa that I didn't even know where to start.) 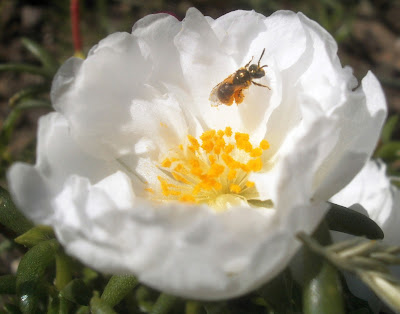 They're not very picky, whatever they are. I think this is the same species, on Tagetes:

And maybe again on a dandelion: 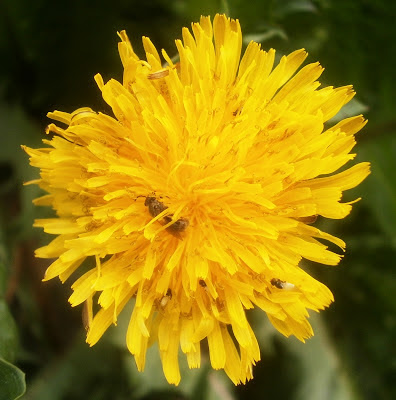 But the insect I started this post to talk about is this last one. 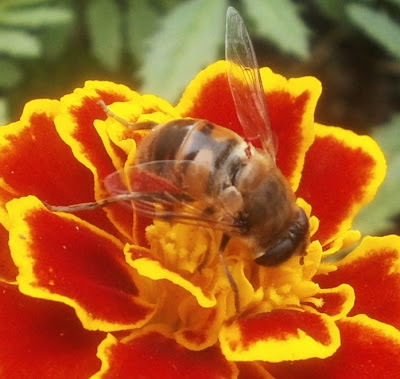 Because it looked enough like a honeybee at first glance, I initially got excited about this, but the longer I looked, the more it seemed . . . not quite right. Once I'd uploaded the pictures to the computer, and had a chance to look around a bit, I concluded that, whatever it might be, it was definitely not a bee -- no pollen baskets on the legs, only one pair of wings, stubby antennae, huge eyes, and it didn't seem nearly fuzzy enough to be a bee. 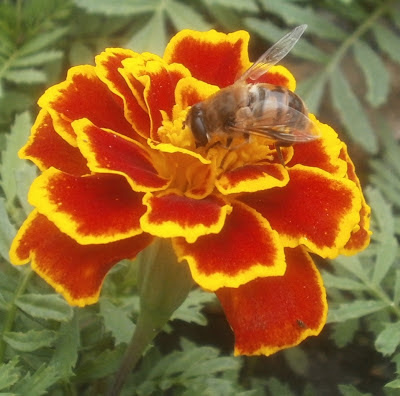 After some research, I think the genus is probably Eristalis (hoverflies, drone flies). One of the more likely candidates for the species is E. tenax. Which seemed fine, until I read the Wikipedia entry for E. tenax. Now that I have, I'm kind of retroactively grossed out by it: I could have been perfectly happy not knowing that there was such a thing as a "rat-tailed maggot." No wonder it wants to dress up as something else.