File under "better late than never:"

It's been some time since PATSP's "Rumble Among the Jungle," in which PATSP readers voted in a single-elimination tournament to determine the Best Houseplant of All Time. The winner, Schlumbergera cvv., was declared a year and a half ago, in November 2011. (The results of all matches are collected here, if anyone cares.)

The husband suggested photoshopping a belt, tiara, or trophy -- or all three! -- into the picture, in honor of the win, but I'm afraid I'm not skilled enough to do that, so you'll have to imagine.

Thanks to a reader,1 we finally have that picture, and I've got to say it completely lives up to what I'd imagined (though is it just me, or does the belt make it look fat?):

So congratulations again to the Schlumbergeras.

I've occasionally thought about doing a second RATJ, but 1) Polldaddy seemed to forget that I had an account there shortly after the RATJ ended, which is irritating, and I haven't bothered to create a new account; 2) my memory of the first one is that it took a lot more time to run than you'd think; and 3) I'm not wholly convinced that Schlumbergera wouldn't just win again.2 So maybe it'll happen sometime. Everybody did seem to have a good time, and we've got a different group of voters now than we did back then, so it could still be surprising.

In any case, thanks for the Photoshop work: if nothing else, I think it's convinced me that tiara-and-a-belt is a good look, and now I want to see that combination on some prizefighters and beauty queens.


1 (I didn't know if you'd want to be credited for it by name or not, so I've erred on the side of privacy. But feel free to take credit in a comment, if you want to.)
2 (Though that could maybe be dealt with by making a rule that plants who'd won previously wouldn't be eligible to compete again.)
Posted by mr_subjunctive at 3:00 AM 2 comments

The tag said Potinara, but apparently that's now Rhyncholaeliocattleya. Really we should know not to pay much attention to what the tags say anyway.

And it's not the best picture either, but you should probably also not be paying all that much attention to the pictures. Highly saturated reds and pinks always make my camera completely lose its mind: sometimes I can adjust it into a reasonable picture, and sometimes I can't. 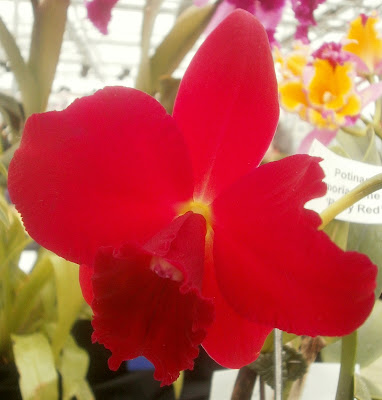 The Strawberries Finally Pay Off

Those of you who have been reading PATSP for a while will be familiar with the story, but just to make sure everybody is crystal clear about what this means:

We moved to the current house in 2009. I had a lot of ideas in the gardening department, and more enthusiasm than sense, so I'd bought all kinds of plants (where "all kinds" means "mostly annuals") in preparation for the move. One of the higher-priority items was a strawberry plant ('Fort Laramie'), because my family had had a substantial strawberry patch when I was a kid, and this was something I wanted to duplicate in the new place. (I had similar dreams regarding raspberries, lilacs, weeping willow, and rhubarb, none of which are anywhere close to happening, even after four years. And the willow is never going to happen, on account of not having the space for one. But I digress.)

Well. So when we moved in, all the plants I had purchased were either stuck somewhere immediately (mostly in containers), or thrown up against the side of the garage until we could figure out where to put them. The strawberries were in the latter group. Realizing (correctly) that we were likely to procrastinate for a while, they sent out runners and planted themselves by the garage, because strawberries are no-nonsense plants that will not put up with your shit.

Which was all great and everything, but they planted themselves too late in 2009 for anything to happen, fruit-wise. So then there was a fall, and a winter, and suddenly it was 2010.

They came back fine, next to the garage, and produced a few (very exciting!) flowers, which turned into a handful of little white fruits, which got bigger and bigger and redder and redder -- and then were completely consumed by birds / squirrels / rabbits.

2012 looked promising initially, but I think they were confused. The spring started super early, and they were still recovering from the move the previous year, some didn't survive the transplant, and then they got hit with a drought, so we didn't collect any strawberries in 2012 either.

With all that for context, then, you can imagine how excited I was about this: 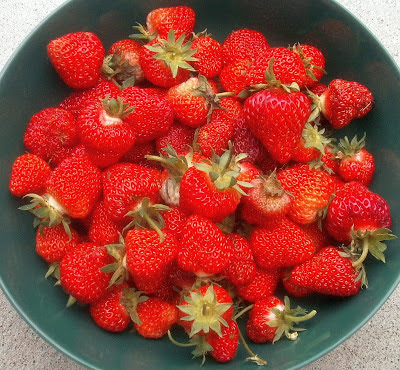 This is only the first bowl; there have been another 1.7 bowls this size so far, and it seems likely that we're going to continue collecting fruit for another couple months. (I didn't find a lot of information about 'Fort Laramie's performance specifically, but this page claims that it "really does everbear," so we may be eating a lot of strawberries this summer. Not sure what to expect from it in our specific conditions, though.)

When I was a kid, Mom used to prepare them by cutting them up and then sprinkling a little sugar over them, so that's what we did with the first couple bowls. I wasn't quite prepared for the taste. Not that they don't taste like a strawberry; it's more that, compared to the ones from the supermarket, they're really intense. (Have you ever eaten something that was flavored with artificial strawberry flavoring, and thought to yourself, goodness gracious, no real strawberry has such an intense, cloying taste, what are the manufacturers thinking, trying to pass this off as "strawberry-flavored?" 'Fort Laramie' strawberries really taste like that.

I then ran into an article somewhere on-line, which I can no longer find, a few days later, which explained how this happened. Bigger berries, everything else being equal, are faster and easier to pick, which saves harvesting time and labor costs. And of course strawberries are sold by weight, not by sugar content or flavor or whatever, and the cheapest, fastest way to pack on weight is for most of their volume to be water. Therefore: tasteless, odorless strawberries the size of apricots. (Basically the same thing that's happened with other fruits -- supermarket oranges are why I no longer like oranges, for example, because they're so bland.)

These, though, are a lot softer and less fibrous, the individual berries are smaller, and you can -- I am not kidding -- smell them from twenty feet (~7 m) away. Why we're not having to fight more with the birds and squirrels, I have no idea.

So. I think I spent $7 for the original pot, and I'm guessing we've gotten at least seven pounds (~3.2 kg) out of them, albeit after waiting for four years. It's about damn time.

Labels: Fragaria, other, the garden

I announced the book giveaway winner on Sunday, but it's been a few days and they haven't e-mailed to claim it, so I'm drawing again. The new winner is comment #2, Paul.

Paul: send an e-mail with your mailing address (I think I know which Paul you are anyway, but just to be sure), and I'll forward it to the relevant people so you can get your book.

Posted by mr_subjunctive at 9:13 AM 4 comments

Finally it's gotten warm enough that this year's outdoor plants can all stay outside for a few consecutive days, which makes my life a bit easier. (It's also been very rough on me mentally -- it's just too weird to be hoping for the weather to be warmer.)

I'd put the younger Eucharis bulbs (the ones I bought two years ago) outside a while back, but then it got cold for several days, and I put all the plants back in their previous spots while we rode out the cool spell, and then for some reason I had neglected to move the Eucharises back out again when the weather improved. They were only out for a couple days, but apparently that short period of brighter light was all the encouragement one of the plants needed to decide to produce a bud. 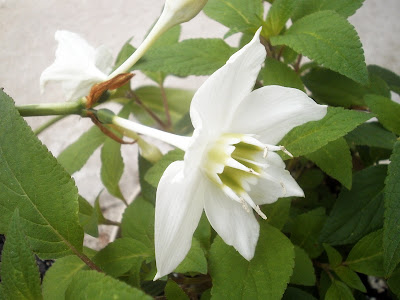 The smell is as nice as I remember, though it's been a long wait. I didn't move the plant back outside until the flower was already well underway, but that doesn't seem to have hurt it: it's possible that it's lasting longer than the previous ones did.

I should probably note that the foliage behind the flower is not that of the Eucharis: that's this year's attempt to grow Salvia elegans. The two plants have apparently become friends or something. Which is good, since the Salvia was new and all.

The randomly-chosen commenter for the book giveaway was #8, Dave.

Dave, please contact me by e-mail (address in the sidebar; please note the instructions) to let me know where to have it sent, as your links do not include an e-mail address.