Since my last post, there's been a family event (death in the family on the husband's side). It would be complicated to explain, but the upshot is that although it's not a big emotional crisis for anybody involved, for the first time since 2006, I'm sleeping by myself, and all alone in the house,1,2 and everything is now all upside down and backwards.

So either I'm going to wind up writing lots of blog posts out of boredom, or I'm going to be writing no blog posts at all because I'm trying to clean the house top to bottom. Physical stuff seems more distracting than verbal stuff right now, so the smart money is on cleaning / no blog.

In the meantime, here is a new orchid for you to look at, and I will be back when I can. 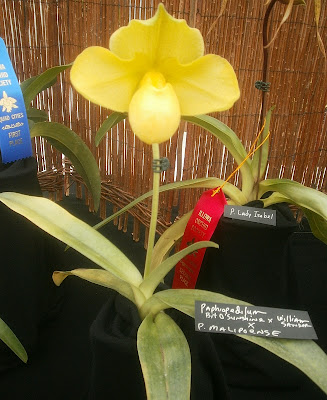 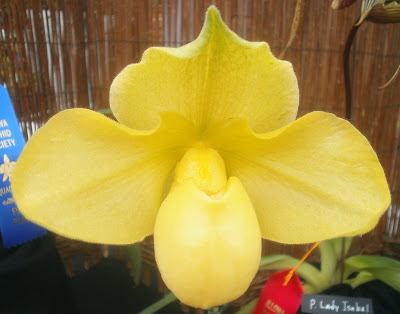 or it could be

It looks like the tag is trying to suggest the first option, so that would be my guess, but parentheses would have helped clarify.


1 (save for Sheba, who tries, but is not a great conversationalist. She's really more of a listener than a talker, and honestly, she's not even that great of a listener sometimes. It depends on how often I'm saying "Sheba.")
2 I would have gone with the husband, but you would be surprised how difficult it is to find someone to plant-sit 1000+ plants for a week on short notice, and many of the Anthurium seedlings in the basement wouldn't be able to survive a week without watering. To say nothing of trying to find someone to take care of Sheba. Maybe if we'd had more time to figure something out, I could have gone, but it was all pretty abrupt.
Posted by mr_subjunctive at 9:51 AM 2 comments

This particular orchid is unknown to the orchid registry where I usually confirm names, or at least it was as of a year ago, when I was looking for IDs on the 2013 batch. I found plenty of orchids named "Tequila Sunrise" (Cymbidium, Miltoniopsis, Phalaenopsis, Dendrobium, Rhyncholaeliocattleya), but Tolumnia wasn't among them. So I can't tell you what the parents are for this one. 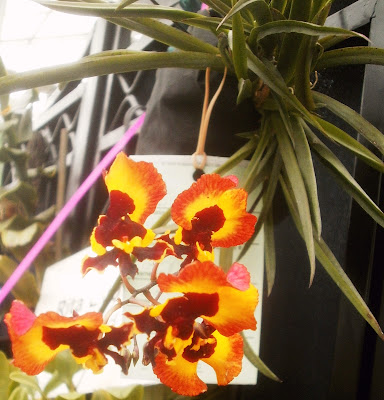 And that is all I can say about Tolumnia Tequila Sunrise.

I came very, very close to not going to the orchid show this year,1 but I went. And it was . . . okay? Every year, it feels like the show is smaller than the year before, though I don't think it's actually changing in size; I think there's just something weird about the way I store orchid show information in my brain. (I also always think that I got better pictures than in previous years, which never turns out to be true either.)

Compared to previous years, the 2014 pictures seem unusually heavy on pink, purple, and shades in between, and unusually light on yellows and oranges. I tried to get fewer Paphiopedilum and Phragmipedium photos,2 though I wasn't entirely successful. I tried to get more Masdevallia pictures, but I don't think I succeeded at that either: there just weren't that many there, and the ones that were there weren't actually that interesting. Certainly nothing anywhere near Masdevallia Sunset Jaguar 'Night Breed,' which I would have loved to have seen again.

Regular posting will remain slow for the next week or two, while I sift through and upload this year's batch of photos. I'm hoping I'll be done with that by the time I run out of 2013 photos (at the end of March).

While in the Quad Cities, we also went to Home Depot, because I wanted to get a bunch of Glidden paint color cards. The reason is weird,3 and I felt really conspicuous and self-conscious about doing it, with the result that I was too distracted to pick up any yellows.4 Then I felt bad about coming to the store just to load up on paint cards,5 so I wound up buying an Anthurium, just like last year. $10 for a 4-inch pot (which seems to have become standard around here), but the color6 is unusual,7 and if it's interfertile with the plants I already have, it'll be good for breeding purposes. 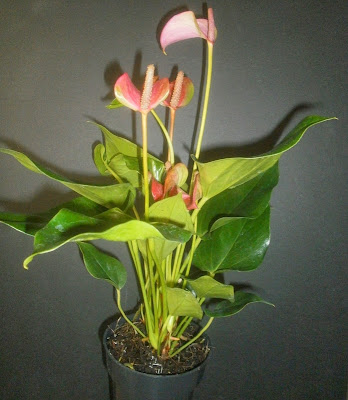 The tag didn't include a variety name, and a trip to the Westland Greenhouses website didn't turn up any possible cultivars, but I e-mailed the company yesterday and they said it was Anthurium 'Joli.' I also learned from their website that, however unlikely it sounds, my 'Joli' was grown in Grand Bend, Ontario. Which I am still trying to get my head around. (How is heating a greenhouse in Ontario not prohibitively expensive? How can Ontario compete with Florida?) 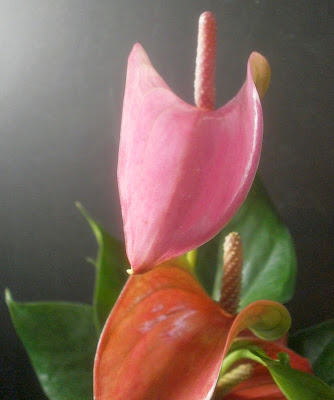 Not only are they Canadian and prompt to reply to e-mails, but the instructions on the Westland Greenhouses tag are much, much better than the instructions from the Just Add Ice tag, and includes "don't place in direct sunlight during the summer months" and "add fertilizer once after every six waterings." Neither of those are exactly what I'd recommend, and of course "better than the Just Add Ice care instructions" is a very low bar to clear, but I am nevertheless pleased, and give you permission to purchase Westland-grown Anthuriums.

Also making me happy is the tag's shape. Perhaps I have a smutty mind, but, well -- you can see it, right?


1 Back problems, probably caused by me trying to get through the weekly watering cycle faster than normal. (I didn't want to come back from the show on Saturday and still have a hundred plants to water.) We wound up going late on Sunday, which seems to have worked out fine.
2 They were there, of course. I just tried not to take many pictures of them, because I really want to be able to grow them and can't. Seeing photos of them just reminds me of this, and then I get depressed.
It's not like I'm great at growing any orchids, but I only get upset about not being able to do Paphs and Phrags.
3 It's been bothering me, when I write stuff down about the Anthurium seedlings, that I don't have better ways of describing spathe colors than just "red," "dark red," "pink-red," etc. I mean, that's fine as far as it goes, but it'd be nice to make finer distinctions, in cases where, for example, flower A is red, and so is flower B, but Flower A and flower B aren't the same color. Now that I have a set of cards to compare to, though, I can say that flower A is "Cherries Jubilee" red, and flower B is "Red Rose Bouquet" red, and feel more or less confident that I have made an important distinction. (note: All the Glidden color names in this post are ™ Glidden. In using their names, I do not mean to imply in any way that Glidden approves of me, my blog, Anthuriums, or plants in general; I'm just using them as a convenient means of identifying specific colors. Conversely, I don't want to imply that I approve of Glidden, their marketing department's color-namers, Glidden products, or paint in general, either.)
It may or may not actually be an important distinction, of course. But I've noticed in the plant patents I've looked at that they frequently make references to standardized colors (one set of which is apparently the Exotica Horticultural Color Guide, mentioned in the Dracaena deremensis 'Warneckei' profile), so it seems like this is something I'll eventually have to think about. May as well start now, I figure.
I tested this out yesterday. Compared cards to a couple spathes before dinner, and then checked all the plants that are currently blooming after dinner. My pre- and post-dinner assessments didn't agree, so there are clearly some problems with the whole concept. But it may be better than nothing.
4 The logic at the time was that I was so vanishingly unlikely to ever have a yellow Anthurium spathe to describe that I had no need to pick up any yellow cards. Then I got home and remembered: spadices. Almost all my spadices are yellow. D'oh!
5 The husband assured me that Glidden and Home Depot would manage to scrape by financially, even if I took their paint cards, and I believed him, but 1) he told me this after I'd already bought the plant, and 2) there's a good chance that I was rationalizing buying the plant with the paint chips thing. It's not like I need more plants, after all. And it's really not like I need more Anthuriums. But I wanted it. So there you go.
6 (somewhere between Blooming Fuchsia and Sexy Pink for new spathes, aging to Watermelon Smoothie)
7 Though Mario Speedwagon (#200) is similar, and is looking extremely interesting. The spathe is closest to Blooming Fuchsia (a darkish pink-purple) so far. The problem being that they often change as they develop, so Mario will get more interesting or less interesting with time, and I don't know which it's going to be yet.
Posted by mr_subjunctive at 3:00 AM 4 comments