A lot of the orchids in this year's show were pleasant enough, but not new, or new but not all that pleasant. The more years I go, the harder I am to surprise, I guess. In any case, this was probably as close as I got to a jaw-drop moment, just 'cause it's so dark: 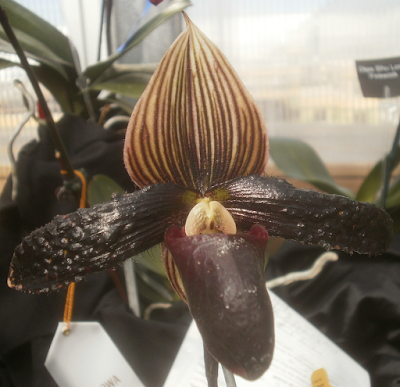 Which, it's not that it's so pretty, exactly. I just didn't know that paphs could do this. (Not saying it's not pretty, though. When a plant's unusual enough, though, pretty is sometimes sort of beside the point, and I think that's what's going on here.)

Paphiopedilum sakhakulii is pretty colorful, but lumpy; an image search says that Black Cherry is smooth and very dark red-purple. (It's really nice, actually. Like, if I could grow paphs, Black Cherry would be a paph I would want to grow.1) This plant seems to take more after Black Cherry, despite being 3/4 P. sakhakulii.


1 Please don't tell me oh but you can! They're really easy! -- it's been tried. It didn't go well. I can only give plants the care that I can give, and that does not currently include care suitable for paphs. Perhaps someday my circumstances will be different -- I'll have a greenhouse, or fewer plants, or something -- and then we'll be open to trying the genus again, but for right now, even though I technically could, in practical terms, at the present moment, I can't.
Posted by mr_subjunctive at 3:00 AM 0 comments