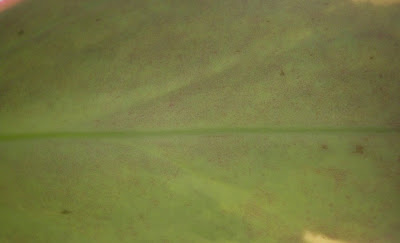 Peperomia clusiifolia cv. There's really no point to trying to do the transmitted light thing with Peperomias. Not that I won't probably try again anyway, but just -- it doesn't work. Leaves are too thick. 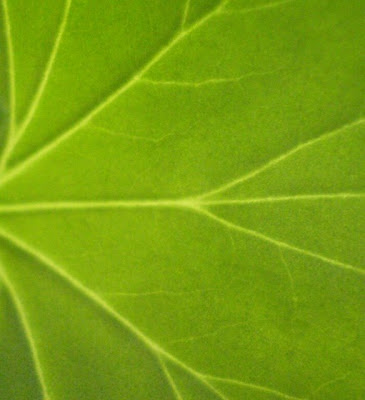 Pelargonium x hortorum cv. Sort of a lost-in-translation thing going on here: in person, this was a not-bad picture, but by the time it's cropped and shrunk, it doesn't look like much. Pelargoniums tend to be difficult anyway, because the leaves, annoyingly, try to curl, which makes it hard to get things properly in focus. 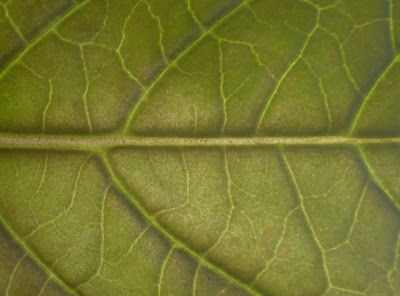 Plectranthus ciliatus. Doesn't make a very good houseplant, though it's a vigorous grower in the greenhouse, or outdoors. They get huge. 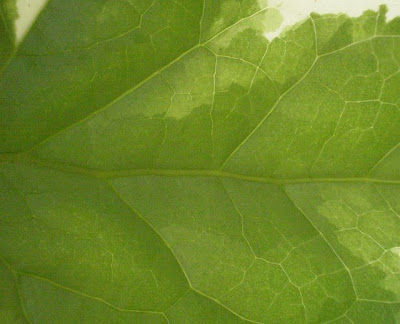 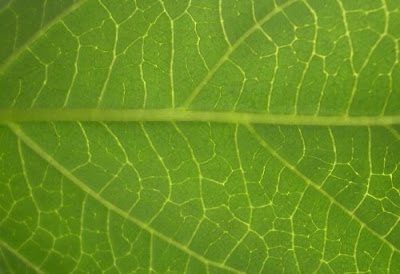 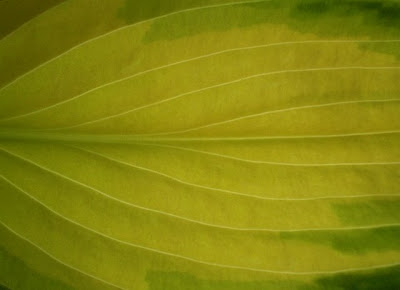 Hosta cv. 'Orange Marmalade.' Is not even remotely orange, by the way. Not sure what sort of weird Hosta-grower logic was operating when the name was assigned. 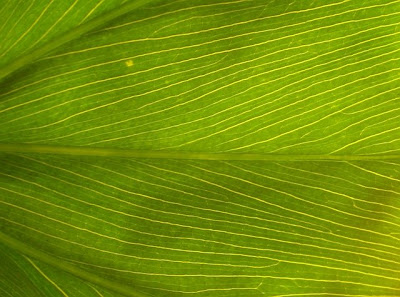 Philodendron bipinnatifidum. Sort of mildly surprising: the venation here is very visible, but the plant is so huge that you're not looking for anything on this small of a scale. 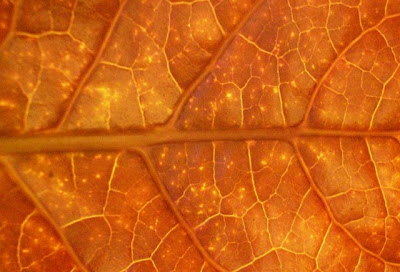 Polyscias balfouriana (new leaf). I dislike this picture but can't pin down a reason why. Nothing obviously wrong with it. Maybe the focus could have been better. 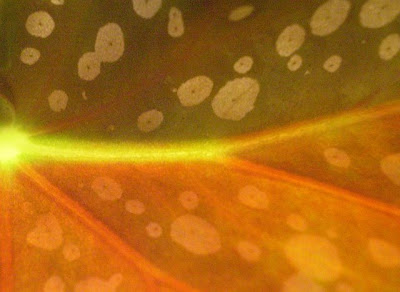 Begonia NOID. Not the best of this particular batch, probably, but it's different from anything else I can remember posting before. It's a cane-type Begonia, maybe also an "angel-wing," but I really have a hard time understanding all the fine distinctions in the world of Begonias as far as which are fibrous, tuberous, angel-wing, dragon-wing, non-stop, and so on and so forth. I can more or less tell the rexes apart from everything else, but that's about all. A person could get a Ph.D. in Begonias, it looks like. 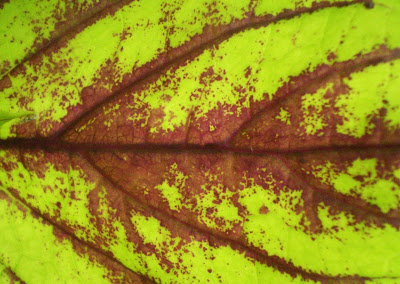 Solenostemon scutellarioides 'Gays Delight.' "Gays" may or may not have an apostrophe in it: the name doesn't really make sense without an apostrophe in there somewhere, but officially, there may not be one.
Posted by mr_subjunctive at 2:30 AM 1 comments

The move is accomplished. No plant casualties reported so far, though the husband tried to put all of his plants (two spider plants, Chlorophytum comosum; two pothos, Epipremnum aureum; and a corn plant, Dracaena fragrans 'Massangeana') out in full sun on the east side of the house, with predictably ghastly results. I expect the Epipremnum and Dracaena to make full recoveries, but the Chlorophytums may be toast. Which I suspect was actually the (subconscious, passive-aggressive) idea in the first place, though he says otherwise. 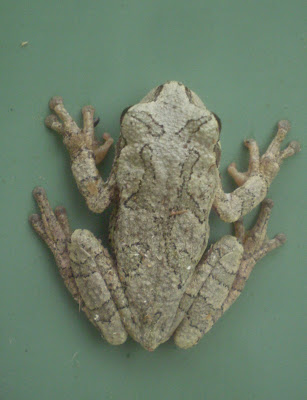 Unrelated photo of a frog which may or may not be the gray treefrog, Hyla versicolor, which was spotted on a garage door a week or two ago. Even if it's not the gray treefrog, it's pretty inarguably a gray treefrog.
Everything in the apartment was cleaned. Everything in the new place, with a few exceptions, is still dirty and still needs to be cleaned. We also have contractors running all over the place putting in fences, replacing windows and doors, cutting holes in the floor for heat/AC vents, installing the heater and air conditioner (though we don't know if we can actually use them yet: they may or may not be done), and doing stuff with concrete, plumbing, and electrical wiring I'm afraid I don't even understand well enough to enumerate. Also we've had somebody in to hook us up to cable and internet. Obviously.

Yet to be done: harmful chemicals will be employed to remove carpet glue from the concrete floor of the plant room (at which point the majority of them will be relocated to the plant room, though the particularly fussy, decorative, or irreplaceable ones will likely remain in the house), three of the five (!) microwave ovens we now possess will be disposed of in some fashion,1 the pink bedroom will have to be painted something a little less pink (assuming we can agree on a color which don't hold your breath), the other rooms will also have to be painted, the wall which was knocked out will have to have the studs removed and replaced with beams, which will then be painted (maybe) and have shelves put in them, everything will have to be swept and dusted and cleaned, the aquarium will have to be assigned a location and set up (ideally before all the fish die), plants in excess of requirements will have to be sold on consignment or given away or otherwise removed,2 furniture will be lugged up and down stairs endlessly, the upstairs bathroom floor has to be redone, the downstairs bathroom needs to have walls and lights put in,3 books and clothes and suchlike all need to be unpacked and sorted and placed in appropriate locations, the downstairs non-bathroom area needs to have its carpet removed, its carpet adhesive dissolved away, and then get re-covered with epoxy or something, and all this while laundry continues to get done, plants continue to be watered, mail continues to be checked,4 bills continue to be paid, and so on. And then at some point in there we have to get married, I guess. And I may go back to work a day or two before June is over as well. And I think I was supposed to write a book proposal somewhere in there too, soonish, if not necessarily in June. 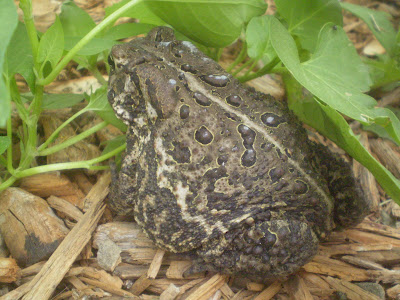 American toad, Bufo americanus. Also from the house.
So the point is that there's a lot of stuff to do. I do anticipate returning to a regular blog posting schedule at some point relatively soon (in the next couple weeks?), but we're not there yet. We'll aim for a post every few days until things have calmed down enough to resume daily posting.

-
1 How two people get five microwaves: 1 The husband had one when we met. 2 I had one when we met. When we merged households, neither of us was willing to give up our microwaves, so we kept them both, and it turns out that it's often surprisingly convenient to have two microwaves, so we got accustomed to having two and now couldn't imagine having only one. (Or, well, I could imagine it, but obviously it'd be totally impossible for someone to actually live like that.) Then 3 a microwave came with the house, and 4,5 the husband saw a couple stainless steel ones that he thought were cool a long time ago, and bought them, and they're still in storage (along with two of our four dining room tables and two of our three bicycles) because we don't have anywhere to put them right now.
2 Which also means that some method of determining how many plants two people might reasonably be understood to require will have to be invented, obviously.
3 'Cause right now it's just a toilet sitting on one side of the laundry room, next to an enclosed shower, which is kind of awkward. Particularly when there are contractors wandering, antlike, all over the house, for eight or nine hours every day, and one of them could pop out of a corner at any moment. Not that we don't have an alternate, less public toilet too. But it's upstairs, and sometimes it seems worth the risk if it means not having to make a trip up the stairs.
4 Less trivial than you would think: here, mail is only delivered to your home if you live on one particular street. If you live on any other street, you have to pay for a P.O. Box and go pick your mail up yourself, except that we can't do that yet because the town is out of P.O. Boxes at the moment. So they're just holding our mail somewhere back behind the counter, and we'll have to go during business hours and ask for it until somebody moves or dies or whatever and we can take their box. Upon first hearing this, the husband and I questioned whether it was even legal -- neither of us had ever heard of anything like this before, and I grew up in a town in Iowa about an eighth this size. So this is freaky and inconvenient and borderline, I don't know, communist or something. When asked, residents of the town just shrug and say that that's how it's always been. The postmaster said "maybe someday" they'll deliver mail to everybody, though according to the husband she said it in the kind of tone that indicates that you don't really think it's ever going to happen, like "maybe someday I'll take that trip around the world I've always wanted" or "maybe someday I'll resume those piano lessons I was taking when I was in third grade."
Posted by mr_subjunctive at 8:53 AM 9 comments