Moving is horrible, and goes on for much, much longer than is tolerable. Yesterday the husband rented a U-Haul truck, so that we could move the really big stuff that would never be able to fit in the car: two dining room tables (one of them had been serving as an office desk for the last couple years. I'm told that we have two more dining room tables in storage somewhere: it will be interesting to see where they all wind up, considering that we basically never eat at a table together: usually we eat in the living room while watching TV.), a couch, a set of box springs, and the two six-foot Cereus peruvianus of mine that I have finally, knock wood, gotten the mealybugs off of.

But then since we had the truck, you know, why not move everything else, too, so we spent Thursday, all day, hauling big, awkward, or heavy objects up and down stairs. Started at 9:30 AM, and didn't stop until about midnight. The below photo is from the last load of the night, and represents probably about 20-30 percent of the total plants (not as terrible as it sounds: the very large or problematic plants all got moved first, so much of what's left are mostly small and won't be a big deal to move). The Cereus peruvianus aren't visible, but they're in there: they're laying on the floor in the back left corner. Which turned out to work surprisingly well, as a large-cactus-transport method. 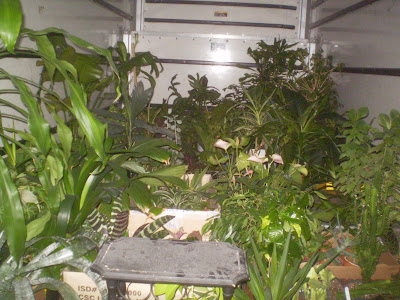 Internet access is likely to be spotty for a while, and new posts will not necessarily resume on June 1, though that's still kinda the goal. It's not that I'll actually be without the internet for much (or any) of this, it's just that there are likely to be more pressing things going on. If nothing else, many of the plants haven't been properly watered in a couple weeks, and I'll have to do that. (I expect to lose a few, though hopefully plants that were already not doing so hot will finally get pushed over the edge, as opposed to plants that were healthy suddenly deciding that they can't go on.)

Meanwhile, you can look at the photo and see how many plants you can identify. I have the unfair advantage of knowing what I have, and having foggy memories of where everything got placed in the truck, but I can see at least 23 distinct species in there. A key will be posted whenever I have the opportunity and inclination.

One nice thing about living outside of Iowa City: there are stars in the country! It'd been so long since I'd lived anywhere with actual dark skies (last occasion would have been around 2001), I'd kind of forgotten about stars. But there are a lot of them, and they're very nice. Hell, we both saw a satellite, even, and I saw, though the husband did not, a meteor. So that's a plus.

I also finally got to see what will become the plant room 1) in sunlight and 2) in the afternoon, so I have a better sense, now, of how much light that room gets. The large tree in the backyard actually blocks a lot of the sunset, but there's a period of decent brightness in there anyway. It should work out.

I was originally kind of disappointed with the town, specifically the landscape, which is really flat, for Johnson County. Most of the county is given to picturesque gently rolling hills, and I'd kind of hoped for that, but it turns out that flat land is okay too: you can see forever, which is good for tornado-watching (I waited for 32 years before seeing my first tornado, and it was a good time, and I'm hoping to see some more. This should be an excellent location.), and the sunsets are, I'm told, periodically breathtaking, and we have a cornfield abutting the back yard, so we'll get to watch (and maybe listen to) the corn grow. I also think I heard a cow yesterday, but the cow remains unconfirmed.

A garden of sorts was planted a few days ago: jalapeno peppers and corn, and that's it. The previous owners had an area already dug up, and it wasn't very big, but that's okay because I'm not hugely into vegetables anyway. Also the soil turns out to be really dreadful, even by local standards: it's basically 100% clay. As in, you can go into the back yard, stick your shovel anywhere, peel off a thin layer of grass and roots, and then mold little unicorn statues all afternoon. It's sort of appaling. So we don't have a lot of hope for the garden, really. Apparently if you live there, you learn to just take it for granted that the soil will have to be amended somehow.

Posted by mr_subjunctive at 8:18 AM 9 comments