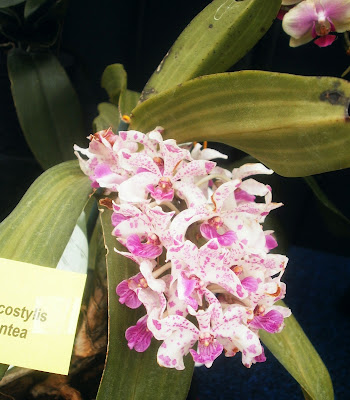 Sort of a good news / bad news situation from the vet, though in this particular case the good and bad news are the same thing:

We had more or less ruled out fleas previously, on the grounds that I've lived with fleas before, long ago, in Texas, and I remembered that vividly enough that I figured it would be perfectly obvious. But we hadn't seen any fleas jumping around or on us. We hadn't seen any fleas on Sheba.1 I've been itchy a lot, but the flea bites I remember from Texas were big angry red things that lasted for days, and I haven't seen anything remotely like that, so I assumed that whatever the problem was, it couldn't have been fleas.2 We still don't know what's going on with me, but it kind of goes without saying that fleas seem much more plausible now.

This is bad insofar as it's not the most desirable problem to have, and now there's a lot of work to be done as far as vacuuming and washing, but on the other hand, it was easily diagnosed and should be relatively easy to solve. Sheba doesn't have some exotic form of dog leukemia, she's not allergic to mold in the walls that would cost us thousands of dollars to fix, and she's not been driven to emo self-harm because we're not walking her enough.3 Just fleas. Could have been worse. And should it happen again, we'll recognize it much earlier, and won't have to let it reach this point a second time.

Anyway. Since I sort of promised plants with the title, and since I've just made you think about fleas for a few minutes, here are some pictures of Papaver orientale: 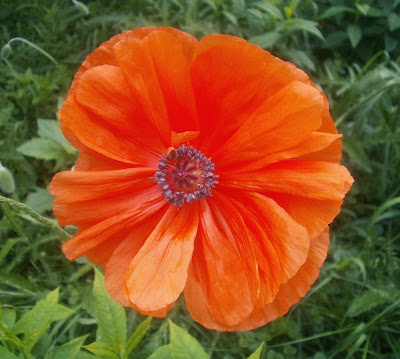 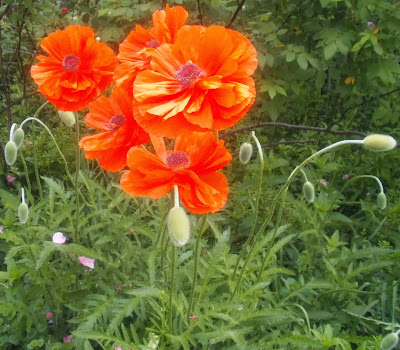 
1 Still haven't, actually - I went through her fur with a flea comb after we got back from the vet, and I couldn't find any fleas or eggs. I don't know if I was looking in the wrong place, if there were never that many to begin with, or if they're just really difficult to find, but I believe the vet because A) he had a flea to show us, and B) he's a vet so you gotta figure he'd know. Though I suppose he could have a whole big glass jar full of fleas sitting in a back room somewhere, that dips into when he feels like selling some medication. (Yes, but am I paranoid enough?)
2 In retrospect, it seems sort of obvious that Texas would have different kinds of fleas than Iowa, given the differences in climate and possible reservoir species. A flea that lives off lizards and armadillos in a region that rarely freezes would probably have different properties than a deer/squirrel/rabbit flea that has to survive winters of -10F / -23C.
3 (Though we are still going to try to walk her more.)
Posted by mr_subjunctive at 3:00 AM 9 comments

Some odds and ends today.

Billbergia nutans
This is probably more of a random plant event than unfinished business, but: the Billbergia nutans1 is blooming again. Much smaller show than last year: then, I had seven flower spikes happen more or less at once, and so far this year it's only two. (This could be because I didn't repot this year, though it didn't actually need repotting, so if it's withholding flowers just because I didn't repot then it's being awfully petty.) That doesn't make as much difference as you'd think, photographically, because the flowers aren't terribly interesting unless you're close. 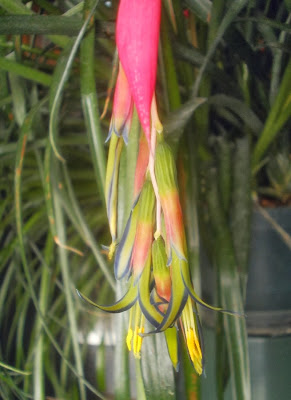 It would also probably help if I had better light for photo-taking, but you know how it is: every spot in the house that gets decent natural light also has plants piled in front of it, and consequently, it's an afternoon of work to set up a spot and take enough pictures to justify all the effort. By which point the sun has often changed positions anyway. This picture didn't turn out so bad, but you should see some of the pictures I tried to get on Saturday. 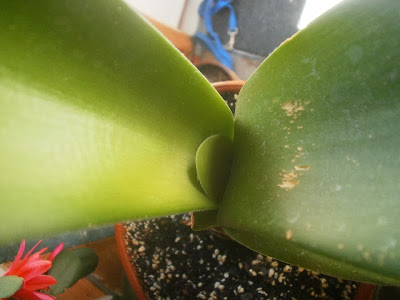 I got my Haemanthus almost exactly one year ago, and in that year, the only thing it has ever done is drop leaves. I think this was mostly due to unusually long and cold shipping, and not because they're naturally big leaf-droppers, but even so, it was sort of disappointing. That only lasted for a couple months after it arrived, though; then it stabilized at three leaves. I then spent nine or ten months looking down into the center of the plant every so often to see if there was any new growth, and being disappointed. Then, a couple days ago, I looked in and there was something new. So I realize this is not the most amazing plant photo you've ever seen, but it's easily the most exciting plant photo in this post as far as I'm concerned.

Leuchtenbergia principis
For the time being, I'm still watering the Leuchtenbergias even though the information I found when writing the Leuchtenbergia profile clearly indicates that I shouldn't. I like to live on the edge like that. Both of the adult plants still have fruits on them, though the fruits don't appear to be doing much of anything. The interesting part, to me, is that they're distinctly different colors. The big plant's fruit is very slightly red-purple: 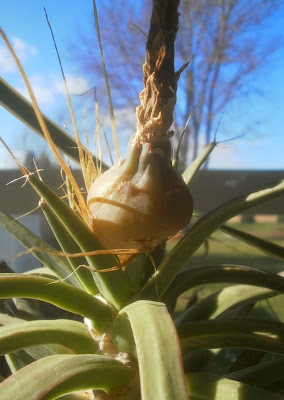 and the small plant's fruit is very slightly yellow-green: 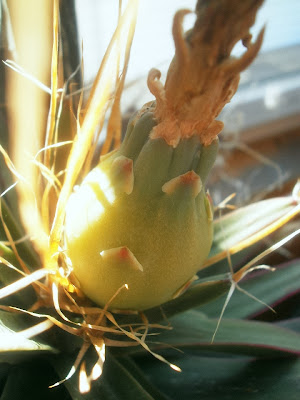 Does this mean anything? Probably not. But it's new. Kinda.

The Leuchtenbergia seedlings I started are sort of doing okay. Probably they would be doing better if I were keeping up better with the watering. Of the 15 seedlings I potted up in individual tiny clay pots, 12 are fine, and 3 have had to be replaced. The usual cause of death, as far as I can determine, is either that I didn't water them when they needed water (small roots means a limited ability to take up water, and seedlings don't have much in the way of water reserves, so when they're out of water, they're out of water), or that I dislodged them from the soil when watering and then they got completely buried under the soil. In some cases, I suspect both things happened. I still had some seedlings that hadn't been potted up, though, so I just replaced those three seedlings and went on. There hasn't been a lot of change in the other 12 seedlings; they might be a tad bigger than they were when I potted them up, but the change is awfully subtle. 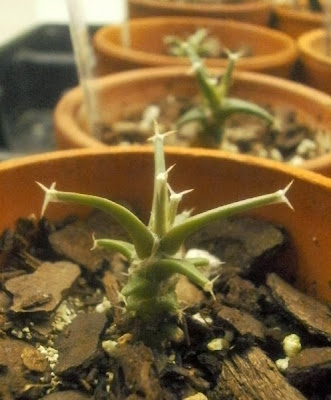 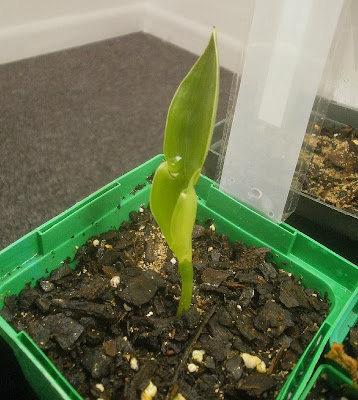 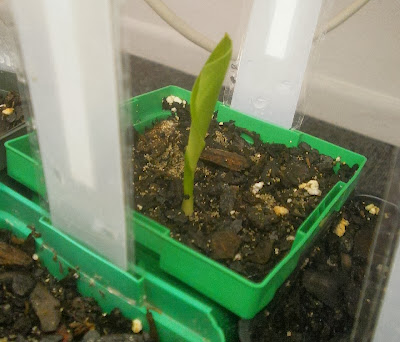 Seedling no. 3.
Strelitzia juncea is primarily of interest because it doesn't have the big, broad leaves of the more common species like S. nicolai and S. reginae,3 so you may be wondering what's going on here. It's pretty simple: S. juncea is one of those plants with different kinds of foliage at different ages. Young plants grow leaves and resemble S. reginae, but as they get older the leaves shrink down to the point where they're basically just petioles and midribs and nothing else. Which is why I was interested. But I'm going to be seeing regular-looking leaves for quite a while first, I expect.


1 (Or Bizzlebergia nutans, to some.)
2 (All due respect, Mr. S., but when are you ever not speaking of seedlings?)
3 Full-grown plants look like this: 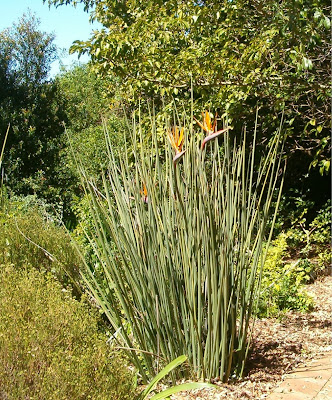 Photo credit: BotBln, at Wikimedia Commons.
Posted by mr_subjunctive at 3:00 AM 0 comments