I responded to some of the comments people left on the previous post, but if you don't feel like checking on them:

The U.S. has not devolved into a Mad Max-style wasteland full of people shooting at one another, as it appeared might be the case following Dallas. So we have that going for us, at least, and I'm genuinely a little surprised. I remain really anxious about next week's Republican National Convention -- it would be difficult to create a more powder-keggy situation on purpose -- but maybe that, too, will pass without the country falling to pieces. Maybe there will even be no bloodshed. We can hope, at least. 2016 really should throw us a break sooner or later. 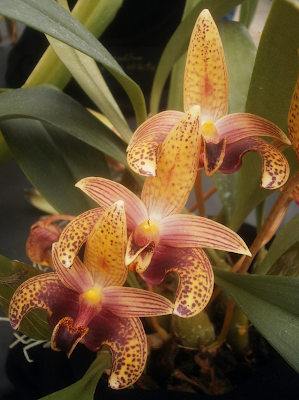 And as far as taking comfort from nature goes, of course that's a good thing. Election years are always1 hard on me, but this year has been especially bad. It's much easier for things like Orlando / Philando Castile / Alton Sterling / Dallas to knock me off balance if there's also an election happening. And things get even worse if I start making weird assumptions like "calm" = "unconcerned," as I was kind of doing in that last post. So if looking at pictures of orchids is part of how you manage to stay functional, I apologize for making it more difficult to do that. 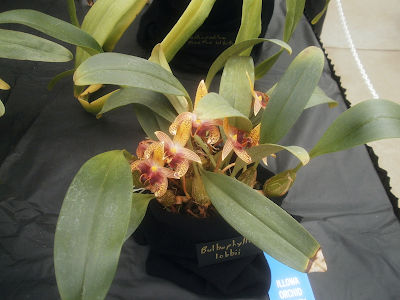 At the moment, I would really like to find something to do, but either don't have the resources or the temperament or both for most of the Black-Lives-Matter-related things I can think of, and to be honest I'm probably not in the right frame of mind to be useful at the moment even if presented with something useful to do.2

But we have an orchid, at least. And it's a pretty nice one, even. Bulbophyllum lobbii is apparently another really variable orchid species; the previously-seen B. lobbii specimens haven't looked much like this at all:

I suppose the other possibility is that some of these are misidentified, but on-line image searches show a lot of different-looking plants. I'm assuming it's probably just that variable.3 This year's plant is easily the prettiest of the three. Lucky for us.

In other news, I can now report that all five Amorphophallus are alive and working on leaves (or maybe blooms, but I'm assuming leaves): 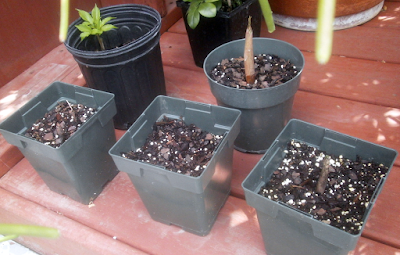 It's still ridiculously late for this to be happening, and some of the leaf buds are still so short you can barely see them in the picture, but everybody's accounted for, and at least I don't have to worry that they've rotted. Hopefully they'll have time for photosynthesis before fall arrives.


1 (For values of "always" greater than or equal to 1998.)
I paid attention to elections, and cared who won, prior to 1998, but it became personal in '98 because that was the year that all politicians of both parties ran against Ellen DeGeneres, and I was pretty newly out to people myself, and it was really, really tough to hear some of the things people were saying about LGBT Americans.
2004 and 2010 were also unusually difficult -- '04 because that was the year of "maybe we need a Constitutional Amendment to prevent the gays from getting married," and '10 because that was the year when Iowa's elections were partly focused on recalling the judges who had ruled in favor of gay marriage in 2009. So every six years, I guess, is an especially bad election for me, but none of them are ever actually good. And none of the especially bad ones were competitive with 1998 until this year.
2 But e-mail or comment anyway, if you hear of something.
3 Like Rhynchostylis gigantea, it has a pretty large natural habitat -- Borneo, Indonesia, Malaysia, and the Philippines -- which probably explains a lot of the variation. It's also possible that they look different depending on growing conditions; I believe the 2015 and 2016 specimens were entered in the show by different exhibitors, based on how they were tagged and displayed.
Posted by mr_subjunctive at 3:00 AM 2 comments