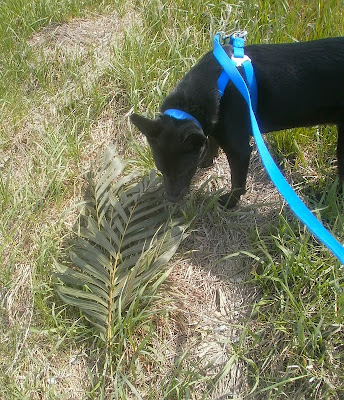 The picture today is of Sheba sniffing at a couple dead palm fronds in a ditch by the side of a rarely-used gravel road. The photo was taken May 1, and I have no explanation for it -- isolated palm fronds are unusual roadside debris in Iowa.

Palm Sunday was April 17, two weeks before this, and anyway I thought churches kept the palm fronds, or at least burned them and kept the ash, to use the next year on Ash Wednesday (Have I been misinformed?), so they shouldn't be escaping into the ditches. And anyway there's only one Catholic church in town, and it's about as far as a person could get from this site and still be within the city. If someone dumped an ailing plant into the ditch, there would have been more fronds, and they would have been attached. I can imagine scenarios where this would happen, but they all seem a little too unlikely to be the actual explanation, and yet, we have the fact of the palm debris, so something unlikely must actually have happened. I invite baseless and outlandish speculation, if anyone has some to share in the comments. Or even rational speculation, if that's all you've got.

Two orchid posts in a row that both reference last March? What's going on here? What happened to PATSP?

It just worked out that way. Sorry.

Today, we have Stenorrhynchos speciosum, again from the orchid show last March. It's one of the possible parents of an orchid we saw at last year's show, Stenosarcos Vanguard 'Fireball,' but the flowers are more densely-packed on this than on Stenosarcos. 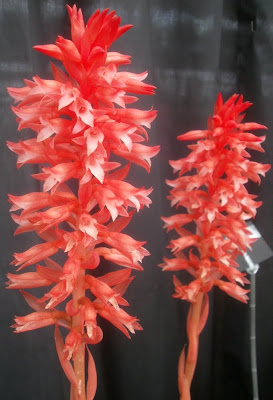 Wound up back at the grocery store yesterday, where I first saw the blue-dyed Phalaenopsis flowers at which we all shuddered two months ago, and they still had them. (More accurately, they'd probably gotten new ones in: I can't imagine even long-suffering Phalaenopsis blooms hanging around for two months, looking exactly the same.)

Which means that I can answer some questions people had back at the end of March.

The bark in which they were planted was not blue; it was normal bark color. Most of the roots were normal gray-white also, though I saw a couple that were the same blue as the flowers. From this, I think we can conclude that the flowers aren't being dyed blue by watering with blue water.

I think I've found a smoking gun for the method, after looking around a bit: 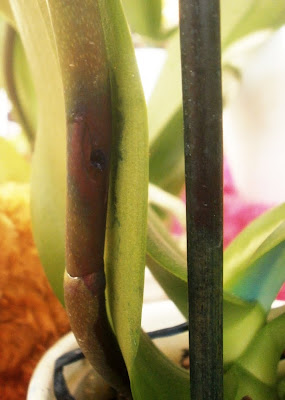 I realize it isn't the best photo (bad lighting), but I think it's clear enough that you can see an injection site with a darker-colored ring around it (it may help to blow the picture up to full size by opening it in a separate window). Not sure what's going on with the leaf that's next to it, but it looks like it's been dyed a little bit too, or maybe bruised.

It's still a lie when you know how it's done, of course. And I'm still angry about it. But my curiosity is satisfied. 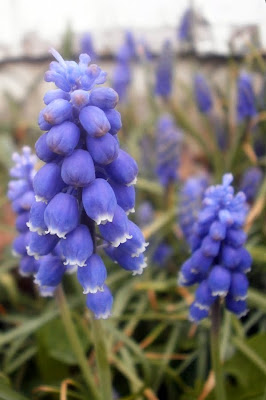 Apologies for the brevity. Lots of sale-/trade-related stuff going on here at the moment, and it's left me without a lot of time to write, but I did want to take a moment to officially notice Muscari, who (which?) are (is?) maybe a few days past prime blooming at the moment. As last year, I find them utterly charming. 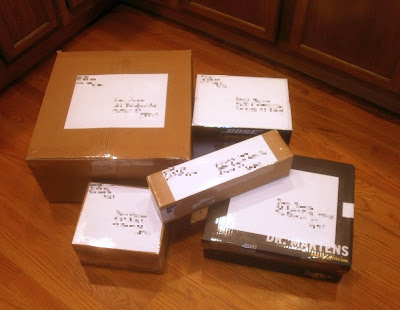 One: the first batch of plants are ready to be mailed out. If you're reading this after 10 AM Monday, CDT, they're probably already somewhere in the postal system, even, barring some sort of horrible catastrophe, sudden appearance of an interdimensional portal, etc.

Two: I did another interview, the results of which are up today at EDGE on the Net, which describes itself as "the largest network of local Gay, Lesbian Bisexual and Transgender (GLBT) news and entertainment portals in the world." This leaves me a little puzzled still about what EDGE actually is, but in any case, I'm in it: Strange Fruit (and Flowers and Leaves).

To readers arriving from EDGE: Hi! You might be interested in The Best Houseplants You're (Probably) Not Growing, or the plant profiles (see list in the sidebar).

Labels: media, other, selling and trading

I haven't been taking pictures in town so much this year, because I was only ever doing that on walks with Sheba, and Sheba and I have been doing a lot more walking on the gravel roads around town. Plus, it's mainly the same stuff that was there last year, which you've seen already. (If you were reading last year. Which I realize some of you weren't. But that's what the archives are for.)

I have, though, seen a couple tulips that were new to me this year, which I present for your consideration: 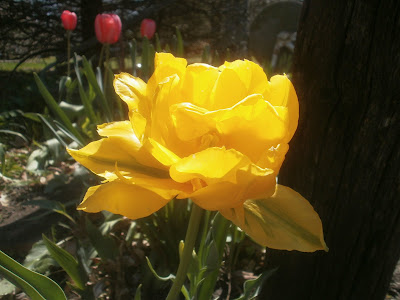 A NOID double yellow. I've seen very few double tulips around here. Mostly this year I've been noticing that there were lots of white ones. Were white tulips all the rage last summer and fall and I just didn't notice? 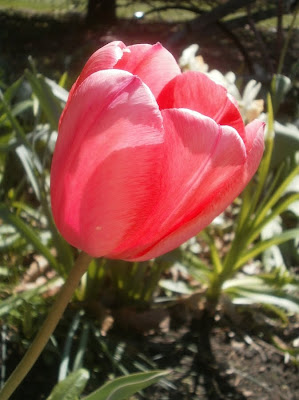 Okay, so it's not unusual. I really liked the picture and wanted to include it. 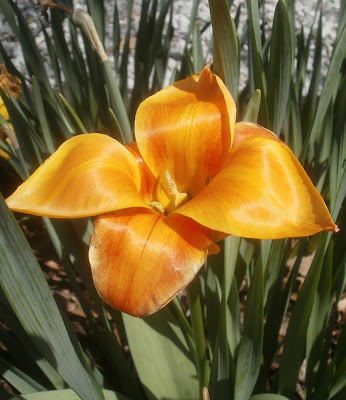 No clue. I looked around on line and found some photos of tulips that were similarly pointy, but nothing that was splayed open like this. 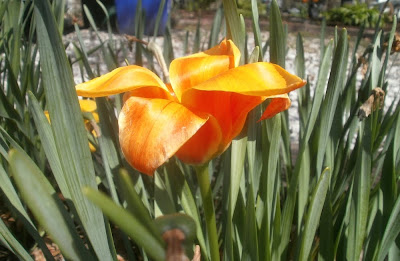 Same flower from a different angle. 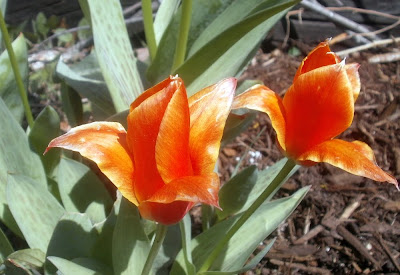 Almost-opened buds from the pointy orange tulip.
Posted by mr_subjunctive at 3:00 AM 4 comments