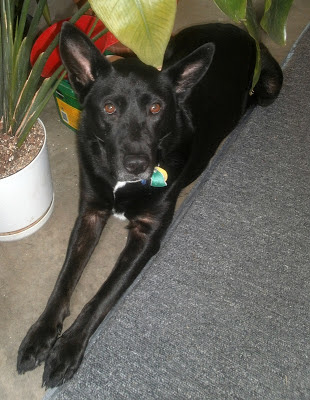 For a while yesterday, Google/Blogger wasn't letting me upload this photo (I tried three or four times), so you almost didn't get to see this. But I tried again after a few hours, because I care, so you do.

Not really any Sheba news to speak of; she's been getting some hot spots over the last month or so, probably because it's been a terrible year for biting insects (I didn't even know what a buffalo gnat was until this year, and I've lived in Iowa about 75% of my life.) and she had existing allergies to something already, which have been coming and going for a long time. I don't think the spots at her elbows are hot spots: I think that's just how her hair grows.

Gosh, you know, I thought after I got back from the orchid show and I was going through the photos I'd taken that this year's batch was pretty decent, but the last couple are making me rethink that.

In fairness, part of the reason why this picture isn't great is that I couldn't get close to the plant. 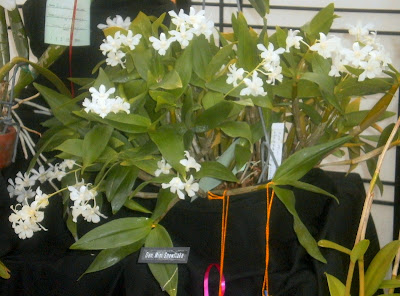 Not sure how I feel about Dendrobiums in general these days, but this one is impressively large and floriferous, so props to whoever grew it.

This is one of those things that I expect will be minor -- possibly even trivial -- to most of you, but it's new (more like "new") and exciting to me, so I'm blogging about it anyway.

When we first moved in here, I bought some 'Durango Bee' marigolds to plant, because . . . well, it's one of those cases where although I can see perfectly well why people might not like them, and sort of feel like I shouldn't like them much myself, I nevertheless enjoy them. It's kind of weird. (The flip side, not liking plants that everybody else thinks are awesome, happens to me a lot more often, it seems like.) At the end of the 2009 season, I collected a bunch of seeds, stored them over the winter, and then somehow neglected to try sowing them anywhere. So in 2011, I threw them all into an otherwise-unused spot, in hopes that maybe they'd do something even though they were old, and to my surprise, they did! And I posted about it at the time.

So then history repeated itself. I collected seeds in 2011, and then for some reason didn't do anything with them last year, so I scattered them into the Portulaca / Muscari bed on the off chance that they might sprout, not really expecting them to. Having already forgotten about the 2011 experience, I was then delighted when they unexpectedly came up again. And we've now hit the point where the first flower bud of the year has opened. 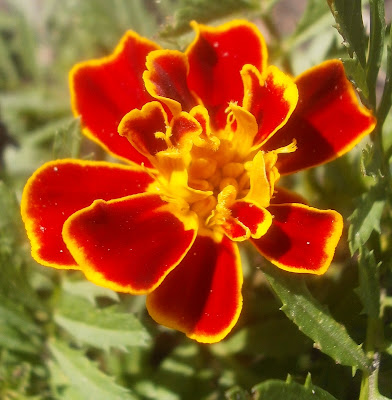 The main conclusion we can draw from this: there will probably be a post in June or July 2015 in which I excitedly announce that I've discovered Tagetes seeds can remain viable ~18 months after collection.

I should also probably note for my own records that the color doesn't coordinate with that of the Portulacas very well. I'm not bothered by it at the moment (we'll see how I feel once more of the Tagetes flowers open up), but they're too dark too look right, I think. 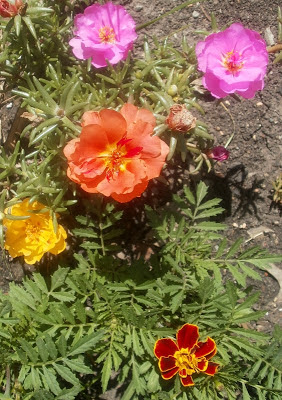 I ran into this last week sometime, through MetaFilter, and it's been on my mind a lot since then (not to mention getting stuck in my head: it's really quite catchy). Not only is it timely, given the recent revelations about the PRISM program and what the U.S. government's been doing with our phone records and on-line information, but for me, anyway, it's also perfectly balanced on that edge between being creepy as all fuck and being really gorgeous, depending on whether you're paying attention to the music (beautiful), the lyrics (beautifully and seductively creepy), or the implications of the lyrics (straight-up creepy).

The "Acxiom" of the title is a real marketing company. (You may never have heard of them, but they almost certainly know a lot about you.)

I hadn't heard of Vienna Teng before this, but she sounds like an interesting person, with roots in software development, music, and environmental studies. In one interview, she even mentions Michael Pollan (The Botany of Desire) as an influence on her music ("The passages where he waxes rhapsodic about cooking or gardening are some of the loveliest bits of prose I’ve read."). So there's that connection, too.

Anyway. Let me know what you think.

let our formulas find your soul.
we’ll divine your artesian source (in your mind),
marshal feed and force (our machines will)
to design you a perfect love—
or (better still) a perfect lust.
o how glorious, glorious: a brand new need is born.

is that wrong?
isn’t this what you want?
amen.