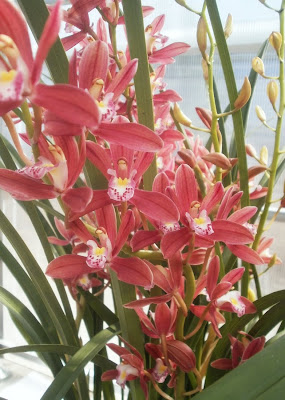 SPECIAL NOTE: I try not to go two consecutive days without a post, but a bunch of stuff popped up on Monday that made it impossible for me to get one together for Tuesday. And then Tuesday was complicated as well (malware on a computer -- not mine, but one I use for Sims and Hulu -- plus unprecedented levels of family drama1 and the usual barely-doable-within-the-time-available watering), and none of those problems have been resolved yet, so we may as well treat this as the beginning of another long hiatus, 'cause that's what it's going to turn into whether I like it or not. (You can't say you weren't warned.)

Orchid pictures will probably continue to go up about every four days, with minimal commentary, since they're already uploaded and scheduled.

Previously-arranged plant sales, blog comments, and e-mail correspondence should all continue to happen, albeit possibly a bit slower.

So here's the last regular post for a while. I was trying to make up for missing Monday and Tuesday by cramming lots of little fragments of posts together into one (Sort of like a blog-post McNugget.), until my Tuesday went to hell and I ran out of time. 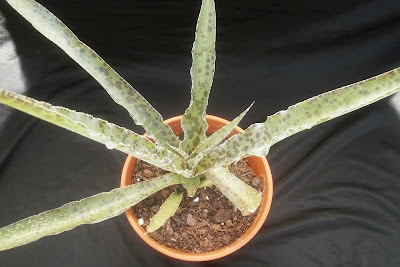 Manfreda undulata 'Chocolate Chips.'
I wouldn't have gotten this one either -- it was on the pricey side,3 and is a genus I haven't tried to grow before -- but I've been wanting a Mangave to try for a very long time, and this is the first thing I've seen for sale that was even close to a Mangave. So we're trying it. So far, so good, though it's lucked into one of the outdoor spots, so I really won't have any idea what it's like to grow indoors for another six months.

It still has a ways to go, but I should be seeing an actual unfurled leaf fairly soon. Kind of excited. 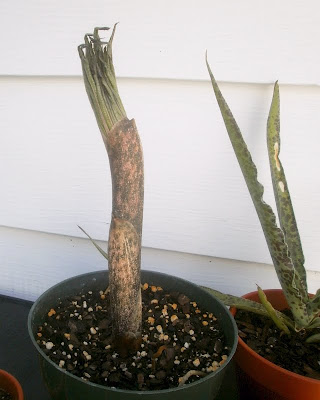 The one bad thing about Amorphophallus is that plants with pronounced dormancies, that need to be stored dry during the winter, make me really nervous -- I'm always scared that I'll kill the plant accidentally and not find out until I go to start it again. I don't know why this is more scary to me than the plant-killing I do all the time, but it just is. 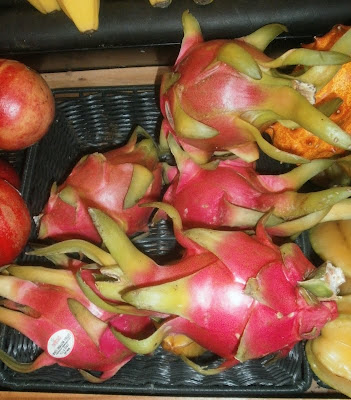 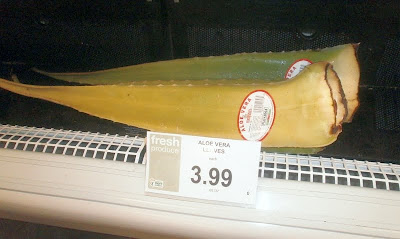 I knew Hylocereus ("dragon fruit") were sold, though I don't think I've ever seen any around here before. Didn't see a price on them. The opposite is true for the Aloe -- I've seen plenty of Aloes, but never expected to see the leaves for sale without the rest of the plant being attached.

4. What Fresh New Hell is This?
From the ex-job: 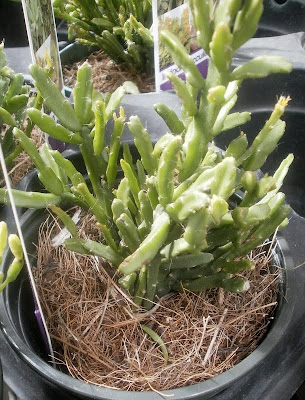 The plant looks fine -- some kind of NOID Rhipsalis, I'm guessing -- but what the hell is it growing in? Is that all coconut fiber? Can epiphytic cacti live in something like that?

5. Zea mays
One way to know that you live in Iowa next to a corn field is to check your lawn for . . . hmmm. I don't know if there's a term for these or not.4 I'm going to call them "cornweed," until I hear a better name. 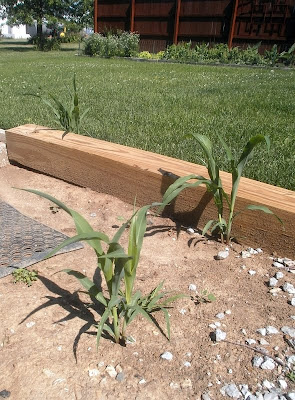 There's also a few in the garden along the fence, though you can't see them clearly from this photo.
Squirrels drag unharvested corn cobs from last year's crop into the yard, then scatter the seeds around as they eat them. The corn these will produce isn't likely to be anything we'd want to eat (field corn is gross), so it's kind of pointless to leave it, but all the Iowanness in me rebels at the idea of pulling up a cornstalk, so they stay.

6. Gomphrena 'Audrey White'
In other news, Gomphrena now comes in white. Maybe it always did. I wasn't aware of it until this year, though. I don't know how I feel about it. 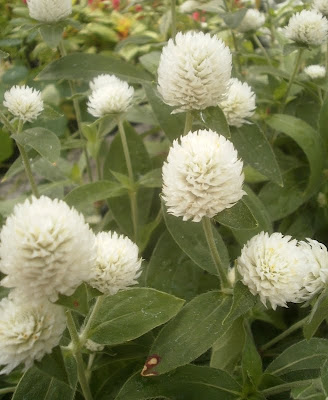 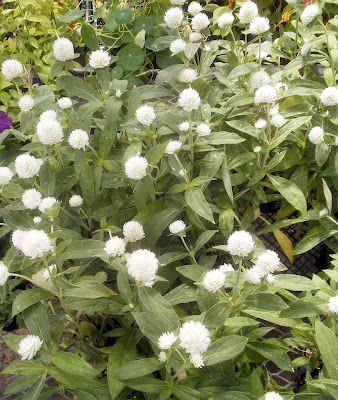 I guess that's it for now. See you when I see you.


1 I and the husband are personally fine, and don't expect to be directly affected by any of what's going on. Just in case you were worried.
2 I had a bunch of cuttings going in the basement, which were doing fine, and then I let them get too dry and lost 4 out of 5 of them. There may have been spider mites as well. This is exactly what happened to the previous batch of S. elegans, as I described back in April, so it's possible that it's just not a plant I can grow anymore.
3 ($14.99 plus tax for a 5-inch pot)
4 (There's "volunteer corn," which are the seeds that fell into the soil instead of getting harvested, which come up the following year and are generally removed, but I'm looking for something more specific to the situation of having corn spontaneously appearing in one's lawn.)
Posted by mr_subjunctive at 3:00 AM 11 comments 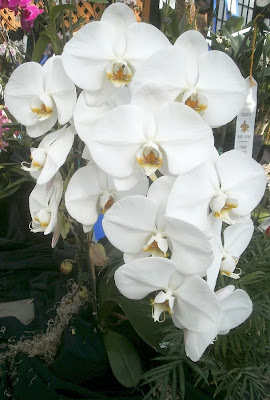 Not really happy with the way the picture turned out here; it's sometimes difficult for me to get good pictures of white flowers because the camera reads white spaces as light, and then darkens everything else to compensate. But it wound up okay, I suppose.

Hard to find much to say about a white phal, though this has having an unusual number of flowers open at once, which I guess is noteworthy.