This was tagged as a Doritaenopsis, but science appears to have more or less settled the question of whether Phalaenopsis and Doritis are the same thing with an exuberant "YES!," so I've changed the name. (The hobby and retail communities' collective response appears to be more along the lines of "We would prefer to continue making the distinction!") 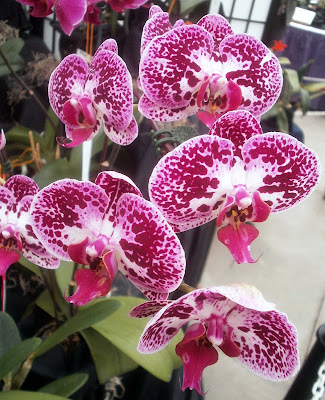 Not the world's best phal or anything, but I suppose this is nice. It at least appears to be well-grown. 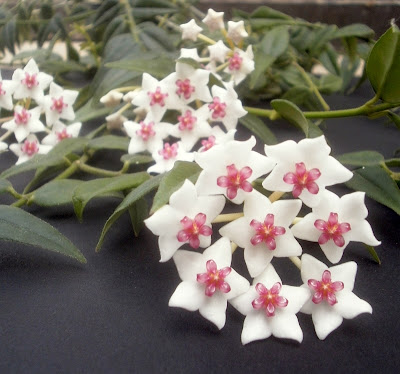 Well, Ivynettle kind of beat me to this post, by posting a larger, better-looking Hoya bella with more flowers on it, but I don't have a lot else going on at the moment, so it's what I'm going to post. I don't think these pictures require a lot by way of context, but I'll note that:

• Hoya bella flowers have been the subject of PATSP posts before (last year; three years ago), 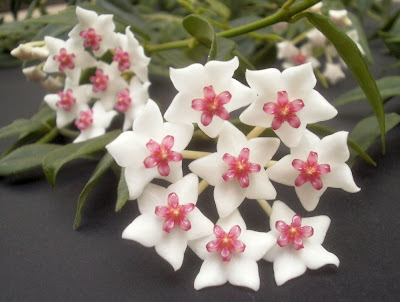 • this is the most flowers my plant has ever had on it at once (in the neighborhood of 15-20 simultaneous umbels, though not all are fully developed), 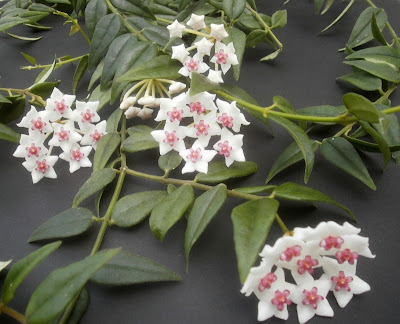 • and I've managed to detect a somewhat stronger fragrance from the flowers this time around, which still strikes me as being sort of generically floral and not anything to get terribly excited about. Though it's still nice. 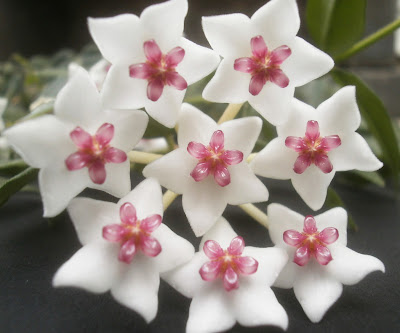 Maybe not entirely missing from retail. . . .

I've been on the lookout this spring for the plants from last fall/winter's Missing From retail series, just to see how absent they really are. For the most part, the plants I said were missing around here still are, but there have been a few sightings.

I guess Cyperus spp. have been around every year and I just wasn't paying attention until this one, because I've seen them in two stores so far, one of which was the ex-job. If they've got them this year, they must have had them in previous years. 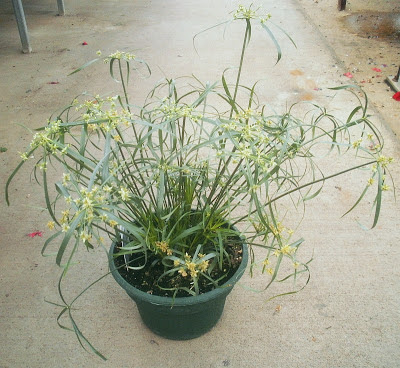 Cyperus involucratus 'Baby Tut.'
I've considered buying a Cyperus, though so far I've managed to talk myself out of it, on the grounds that they'll die the first time they dry out. But there's a great "person" possibility for profile-writing, so I might do it anyway, just so I can say I have some actual experience with the plant and write the profile.

I've also seen some Eucomis bulbs, though at Costco, not any of the local garden centers. I'm not sure what that means. I've been very, very close to buying those, too, and the only thing that's stopped me has been that they were initially $12 for 9 plants, and I wasn't sure I wanted nine more of anything, particularly not nine more of a plant that I wasn't sure would be able to grow in the first place.

Costco also had Crinums, I think. Not at all interested in those.

The ex-job has Cobaea scandens seeds. 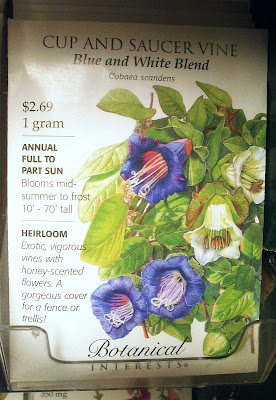 I don't think I'm particularly interested in Cobaea -- everybody made it sound like more trouble than it's worth, and please note the small print on the package ("10' - 70' tall;" the metric equivalent is 3-21 m) -- but nevertheless, they exist, relatively close by.

There have been plenty of Bougainvilleas around town this year; either they've gotten more popular lately, or I hadn't been paying close enough attention before. I doubt many of the customers buying them are intending to grow them indoors, though. (Ditto for Catharanthus, Pittosporum, Fuchsia, Euonymous, Limonium, Acorus, Acalypha, Pentas, Nicotiana, and Liriope, all of which I've seen at least once this year.)

Shrimp plants (Justicia spp. and a few other genera) are showing up all over the place. They've never been completely absent, but I'm seeing new species and new forms this year. (For example: I saw a topiary standard shrimp plant this year.) Manettia luteo-rubra is showing up a lot more too, for some reason.

I've seen quite a few Dyckias in Iowa this year, mostly D. 'Raspberry Ice,' which I think genuinely is a new thing. I'm pretty sure I would already have fifty of them, if they'd been available in Iowa before this. I haven't bought any, because I'm not entirely sure I can grow them still. The first one I had died more or less immediately, and the second one has both survived for a full year and grown substantially larger, but I still don't feel like we've really reached an understanding. 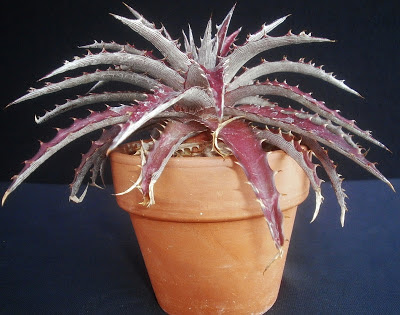 Dyckia no-name F2 hybrid of 'Burgundy Ice,' as of last September. It's substantially larger than this now.
Faucaria spp. are here and there, though I have zero interest in them. (Too closely related to stuff like Lithops and Fenestraria.) Most of the ones I've seen this year have been at Reha's, in Wellman, IA. Ditto for Gibasis geniculata: they're around, mostly at Reha's, and I have no interest. 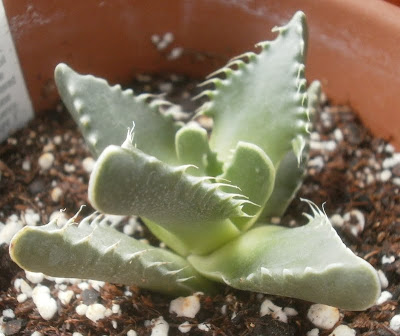 Faucaria sp. (pic is from a previous year, though)
And then finally, the ex-job had a couple pots of Russelia equisetiformis the last time I was there. They were much too large to pose a serious temptation, never mind the question of whether Russelia could be successfully overwintered indoors in Iowa, but they're neat-looking plants, even when not in bloom. 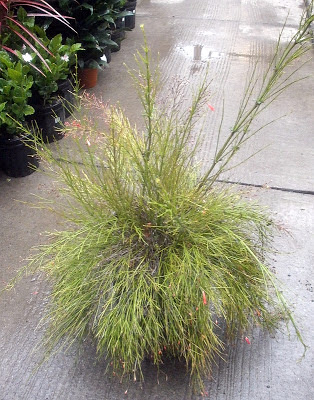 Russelia equisetiformis.
Posted by mr_subjunctive at 3:00 AM 8 comments

At the moment, I'm going through another spell of being unenthused with plants, mostly because it's been cool again here and I've spent a bunch of time and energy putting them out in the morning, watering like mad so I can be finished before it's too cold to have them outside, and then dragging them all back in again. And even then, I've still damaged a couple. (Whatever the books and websites say about the cold tolerance of Aloes, don't believe it.)

So posting might be kind of light for a while, at least until it warms up a little. Not that I'm complaining about having cooler temperatures, goodness knows. 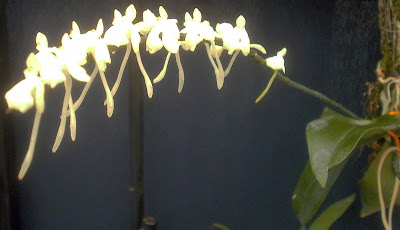 As for today's orchid, these are pretty lousy pictures, but my camera finds black/white contrasts challenging sometimes. I found some much better photos on another blog, which the reader may find of interest. 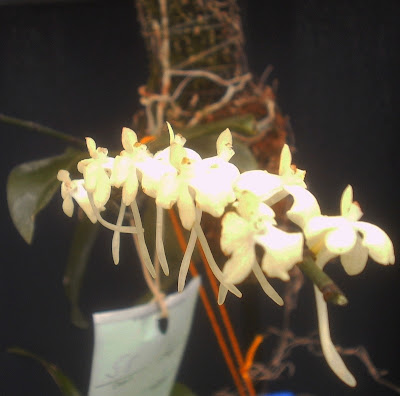