Ever since the Schlumbergera seedlings began to bloom, I have regretted planting multiple seedlings in the same pot. It's especially annoying with plants whose blooms vary according to environmental conditions during development, and seedlings coming from the same cross, because I can never tell whether I'm looking at a single variable seedling or two different but really similar seedlings. This year, I've had to make corrections in both directions: I decided that 057A Pyrotechnic was the same as 057B Oxomoco, so the latter officially no longer exists, and I've also decided that 010A Semantic Satiation is probably two separate seedlings, so you'll wind up seeing me name 010B later, even though it's been blooming for three years already and I'm sure I've posted photos of it before.

018B is another one of these problematic cases. On the one hand, 018A Nudibranch has bloomed quite a bit, and seemed to be pretty consistent: soft orange petals with a white "tube." This year, for the first time, I got a bloom that was more of a red-orange, with a pink tube, 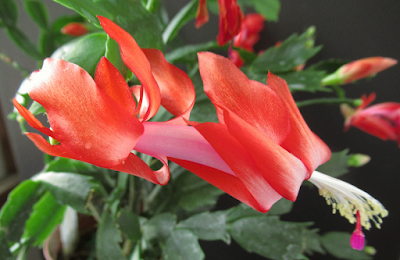 on a separate stem that hadn't bloomed before, which makes it seem like a separate seedling. On the other hand, that coloration has only appeared once so far, and a stem belonging to 018A has subsequently produced something very similar, just not quite as red/pink: 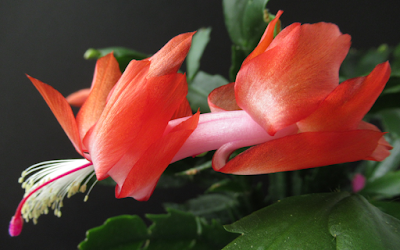 So, we're starting the season with a pretty low-pressure naming situation, because there's a good chance that I'll decide later that 018B is the same plant as 018A, and I'll wind up dropping whatever name I give this one.

It seemed to work okay last year to narrow the initial list down to four names and then choose from among those, so that's what I'm going to do this year as well, unless that becomes a problem somehow. The finalists are: Also Included, But You Might Like It, Fifth-Year Senior, and Maudlin.

But You Might Like It is a reference to a family story. I think it's natural, when reading it without knowing the reference, to put the emphasis on "Like," but I mean for it to have the emphasis on "You." The story is: when I was a kid, my family attended a church that was a pretty long drive from where we lived, and although they had potluck dinners after the morning services from time to time, we didn't usually participate because of that. Making the drive was effort enough without having to cook something and transport it to the church too. So one day after church, one of the members of the church, a woman, was talking to Mom and Dad about staying for the potluck, and Mom and Dad were like, well, but we didn't bring anything, it'd be weird, and the woman said something like, I'm sure I've got something at home that you could take with you, just come home with me for a little bit and I'll give you something, we'll say you made it, it'll be fine.1

So. We go to her place, and she throws a couple prepared but uncooked pies in the oven, and everybody talks for a while or whatever, and loses track of time a little bit. When she thinks to open the oven again, one (or maybe both?) of the pies has burned. And in the version of the story my parents tell, then, the lady goes on and on to her husband about how the pie is ruined, and she could never serve anything like this to people in the church, it would be so embarrassing, what are they going to do. And then at some point she stops talking about how terribly unacceptable the pie is, turns to my parents, and says brightly, well but you guys might like it.

Which I gather stung Mom and Dad a bit at the time, and maybe a little bit still, but they also think it's funny, and I figure there's little chance of the pie-baker ever seeing this post so I don't feel bad about sharing the story.2 Mom is pretty clear that the woman didn't have any idea what she'd said, what the implications of it were, which makes it both better and worse.

Fifth-Year Senior is just a reference to how much time it took for the seedling to produce a bloom, if it is in fact a separate seedling.

Maudlin is also intended to honor a specific person from my life;3 I don't think he was generally using the word correctly,4 but he used it a lot, and I can't hear it without thinking of him. And the flower looks kind of frazzled in a way that could be depression, I guess, if flowers can be depressed, so.

First name to drop is Also Included. It's fine, especially since there's a good chance that I'll decide 018B isn't a separate seedling in the next couple years, but it's vague and abstract and all three of the others are more interesting.

And then Maudlin isn't great. I mean, if anything, when I look at that first photo, with the petals looking all pointy and windblown, I see angry or hurried a lot more than weepy.

So that comes down to But You Might Like It or Fifth-Year Senior, and that choice is basically a choice between marking the seedling as "inferior but potentially enjoyable" or "slower to complete than expected." And I think the latter is more specific to the seedling. There's nothing obviously inferior about 018B, and I kind of like But You Might Like It better as a name. It might be better to hold on to that one for a later seeding, one where the name has a better chance of sticking.

So, officially, this one is to be known as 018B Fifth-Year Senior, unless and until such time as it becomes clear that it's actually just more 018A Nudibranch.


1 Why not just say oh honey, you're a member of the church too; nobody cares about the rule, just come anyway, it'll be fine? I don't know. I mean, you'd think that that would be more acceptable than lying, in church, even if it was a lie about something so inconsequential that it couldn't possibly have mattered to anyone. But then, you'd also think that if it was so inconsequential, it would never have occurred to anyone not to just tell the truth: the Subjunctives weren't planning to stay, so I just brought twice as much! or something.
Whatever the reasoning, it's clear that to this lady, thou shalt bring food to a church potluck rates slightly higher, commandment-wise, than thou shalt not bear false witness. Moving on.
2 Even if she did see this post, I figure the odds of her remembering the incident and identifying herself as a part of it are pretty slim.
3 I mean, "honor" might not be quite the right word to use for But You Might Like It. Perhaps "remember." Though "remember" makes it sound like she's dead, and as far as I know she's still alive, so that's still not quite right. "Pay tribute to?"
4 It actually means something like "embarrassingly and/or tearfully sentimental due to drunkenness;" he tended to use it as "depressed out of proportion to the circumstances," whether there'd been drinking or not. Which is not quite incorrect, but is pretty far from what online dictionaries will tell you.
Posted by mr_subjunctive at 3:00 AM 0 comments

It's been almost a month

and I haven't written a new post yet. Sorry. Still here, still intending to blog.

I do at least have name finalists chosen for a lot of the Schlumbergera seedlings, so once I start again, I should be able to rip through those pretty quickly. Not sure what to do with the Anthuriums; with a few exceptions, the blooms are mostly repeating themselves, which is a problem, and the second problem is that I'm feeling a little weird about the drag queen names ever since the 1592 Maliena B Itchcock post. Not sure how to deal with that; haven't even exactly been able to articulate to myself what I'm uncomfortable about.