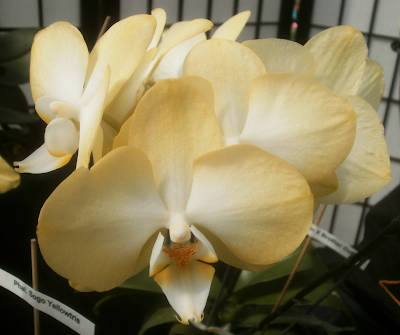 This is okay, I guess. I think I like the yellow / white combination better than I would have liked pure yellow. And it's definitely more appealing than pure white would have been.

The reader will no doubt be pleased to learn that I believe my ongoing itching problem, which has been annoying and frustrating me for much of the last year, appears to have been resolved, and was only dry skin all along. I mean, it still doesn't make any sense to me really, but the fact remains that doing stuff intended to fix dry skin has made the itching go away, so it's hard to argue that dry skin wasn't the problem. So yay. I guess. Why and how my skin got dry in the first place remains unexplained.

The Anthuriums appear to be on strike at the moment. I don't know what they're angry about (my suspicion is that they want to be moved up to 6-inch pots, which I don't have room for), but there are only three plants (out of literally hundreds) in the basement producing new blooms right now. One is 'Joli,' for the first time since I bought it in March, so there may be some new purple genes entering the seedlings in a year or so. The second is #095 "Clarice Fullhartz," who is still bravely trying to build a flower even though her roots are like 90% gone and she keeps getting pulled out of the pot. I'm not sure the bud is actually getting any larger, but she's at least not given up, which I suppose is the best we can hope for given the circumstances. The third is #040 "Ivy Winters," who has started and aborted so many blooms that I'm not really expecting anything to happen with the current buds, but it's gotten further than the other ones ever did, so that's something.

I have at least not spotted any new thrips damage, thrips, or scale since before the last round of oiling. It would be foolish to expect that this means they're all gone, but I nevertheless hope that maybe, something has finally worked.