This one may be fairly new. Not sure. The orchid registry site where I look up ancestry information has three Tolumnia "Genting" greges:1 Genting Angel, Genting Fairy, and Genting Rainbow. There are also several Dendrobiums named Genting something or another. But there's nothing listed for Genting Orange. Which is possibly all for the best, considering that Genting Orange is in no way orange. 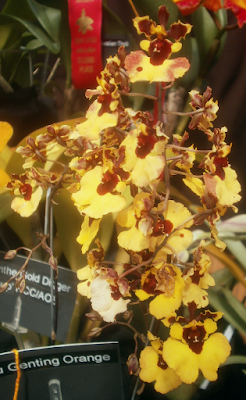 
1 "Greges" = the plural of grex, the term to describe all offspring of a particular cross. In a pinch, "greges" might also be useful if you know a lot of people named Greg and want to refer to them collectively. (Wait a minute. Wouldn't that be "Gregs," you may be asking. Ordinarily, sure. But if you feel like using "greges" anyway, what's to stop you? It's not like this is a situation that comes up a lot. If someone challenges you, just tell them, in a mildly condescending tone, "It's Latin." Referring to Latin is a good way to shut down all kinds of conversations, not just pluralization-of-Greg ones. Though every once in a while you run into someone who actually knows something about Latin, so be careful.)
Posted by mr_subjunctive at 3:00 AM 2 comments

Natalie isn't amazing or anything, just another pink / pink, but at least she's sort of a pretty pink / pink. 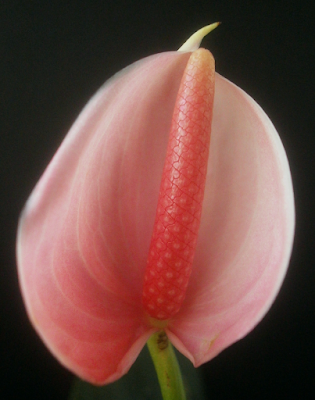 Nine days later, the same bloom looked like this: 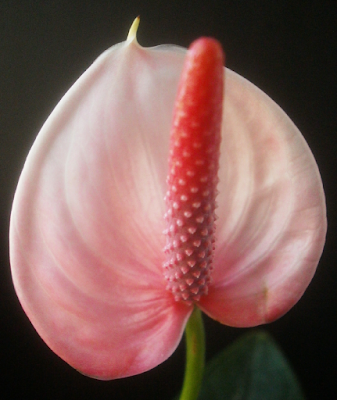 so I'm guessing that Natalie will be another pink that fades to white, as discussed in the post about Anthurium no. 0215 "Nathan Ofithlam."

The foliage is unremarkable, 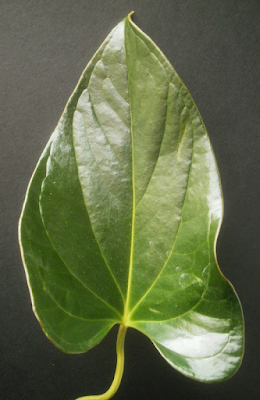 and the plant as a whole is mildly unpleasant due to a long internodal distance, 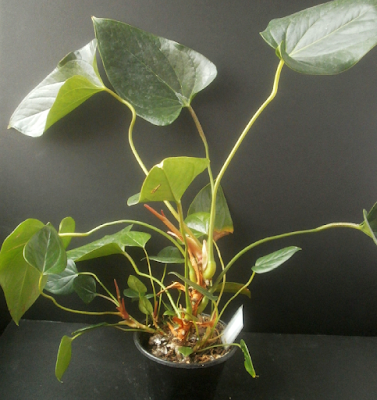 but the real test for Natalie is going to be whether or not she can shake the light scale infestation she picked up a few months ago. I've been looking at the leaves pretty closely when I water, and rubbing off any visible scale with my fingers. Sometimes I rub the leaves in hopes of catching some non-visible scale, which so far has worked better than you'd expect it to, though it's slow, obviously. But I haven't wanted to spray with white oil for fear of causing the bloom to abort before opening, and imidacloprid granules are a non-starter because I think it would all just wash through the soil before the plant picked it up. I don't have a lot of faith that imidacloprid is helpful in my circumstances anyway.

So time will tell. If the scale goes away and stays away for a while, I'll probably up-pot Natalie and try to sell her at the consignment store; if not, I'll throw her out. Space in the basement is way too precious to waste on a scaley pink / pink, even a fairly nice scaley pink / pink.

So Darby has bloomed again. After she failed to get nearly everything right the first time -- tiny spathe, short peduncle, short-lived bloom, thrips scars everywhere, crappy foliage, boring color -- I was waiting to see whether the next one would be any better. Sometimes they do need a practice bloom before they really get going, and when it comes to the seedlings, I'm all about the second chances.

But you know what? The second bloom wasn't any better. 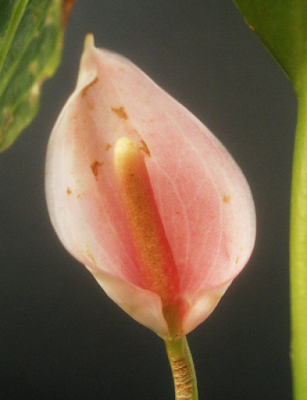 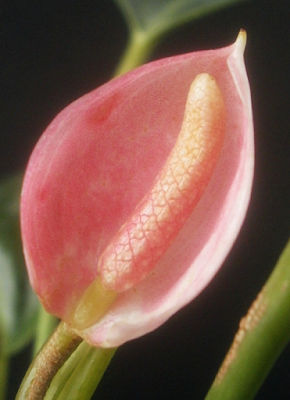 First bloom (3 April 2015).
It might actually be a little larger than the first, but not such that you'd notice. The thrips damage is considerably worse. It's lived twice as long as the first bloom and is still going,1 though longevity shouldn't necessarily count in its favor if this is how it's going to look. In person, the color is unchanged; I recognize it looks different in the photos, but it's not. The newest leaf has as much thrips damage as the older ones did. The peduncle is not only basically the same length, it's bent as well, so that the new spathe faces directly downward.2

So 0415 "Darby Dragons" gets to be the first Anthurium seedling that sucks so much that I throw it out even though it's bloomed. Twice. And exceptionally early. Which is a little depressing, but I suppose it frees up space for a seedling that doesn't suck.