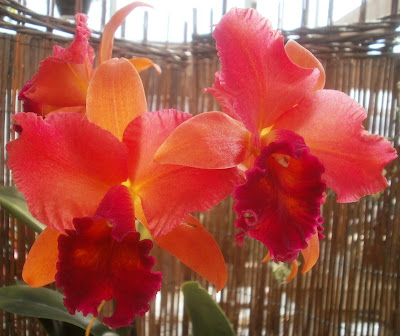 Nothing much to say about this one; it was untagged, so I don't know anything about it.

And I suppose the picture could be better, too. 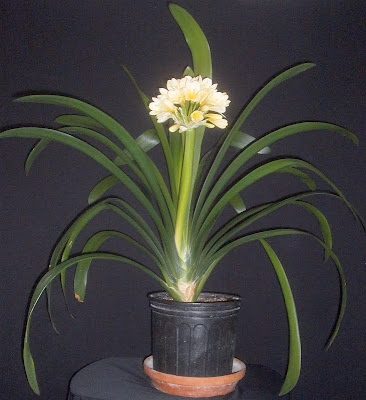 All photos are from either August 8 or August 10, except as otherwise noted.
This is the first of the two big cool things the plant collection did while I was on hiatus. I've had this plant for four years.1 It had blooms when I got it, but it was already pretty close to bloomed-out, so I only got to see them for a few days, during which time I failed to get any decent pictures of them. And then I waited for about 1,435 days, at which point I went to water the plant and saw this: 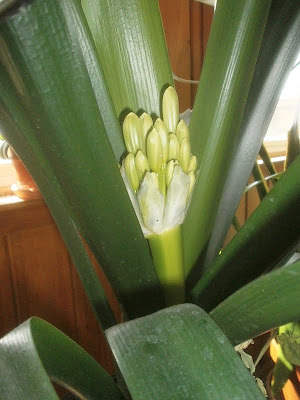 (August 2)
I gasped loud enough that the husband heard it from two rooms away and came running. (I didn't know that was even a thing that really happened: I thought gasping was something that only happened on TV, like time travel or celebrity realtors.)

Over the next week, the buds and stalk grew, until we had this: 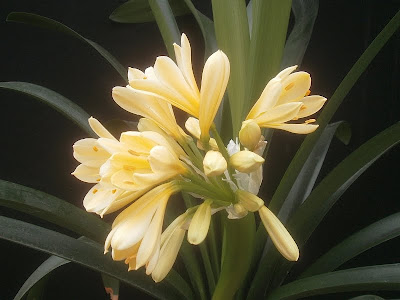 The normal color of Clivia blooms is orange, and frankly, I think I would probably have preferred that to this cream / yellow color. I mean, I get that this is less common and stuff, and I don't find the flowers objectionable or anything, but this mostly just looks washed-out to me, and it's difficult to photograph: see below. 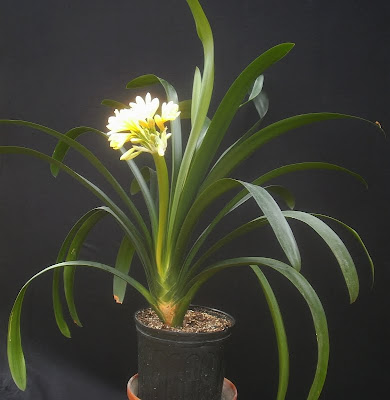 In close-up, it looks much nicer, though. This is pretty close to true color: 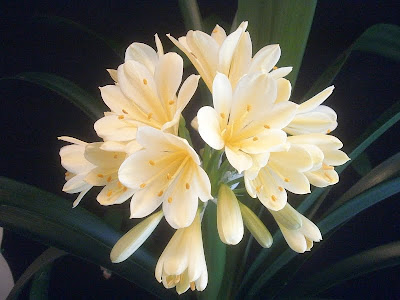 I should note that I don't actually know what I did to make this happen. The main thing that's different about this year compared to last is that the plant's been getting a whole additional year of fertilizer, so that's my best guess, but it's not really blooming at the right time of year (normal is late winter or early summer, says Google, so it's a couple months late), and I'm pretty sure I didn't give it the right temperatures during the winter either.2

Anyway. Worth waiting four years for? Maybe, maybe not. But if it's trying to get me to like it better, it has fantastic timing.


1 From Pierson's. You can tell it was a long time ago, because I still had money to buy plants with, and Pierson's was still willing to take it.
2 (Ideally, this should be between 55F/13C and 34F/1C for about a month, according to this site: what the plant actually got was more like three months of 55-60F/13-16C. I can't let the plant room get much cooler than that, because the other plants in there will complain, but I can't really keep it much warmer than that either, because the room is mostly windows, we're in Iowa, and there's only so much electricity in the world.)
Posted by mr_subjunctive at 3:00 AM 6 comments 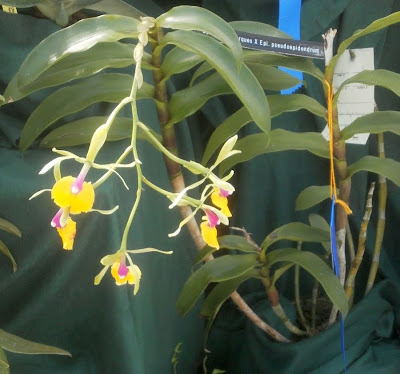 Enough time has passed now that I no longer remember why I didn't get a close-up picture too. (The picture is from March.) I must not have been able to; I'm pretty sure that I would have if it were possible.

These are pretty close in appearance to those in the previous Epicattleya picture. Not surprising, since it was a picture of Epic. Rene Marques, one of the parents of this cross.

In other news, I've discovered scale on a few more plants on Saturday: 3 Hatiora salicornioides, an Asparagus macowanii, and a seedling Murraya paniculata. The Hatioras and Murraya got the basement infestation, and the Asparagus from the Alpinia.

It's also possible that the Asparagus was the original source of the scale that got the Alpinia, since I'm pretty sure it was the newest plant on the shelf in question, and the infestation was fairly advanced by the time I saw it.

In the cases of the Hatiora and Asparagus, I was lulled into a false sense of security by the fact that neither plant has broad leaves and stems: it didn't seem like a scale insect would be able to make a go of it, with so little access to the sap. Plus they're both difficult plants to check, since both naturally have bumps of the same color in places, and since both have lots of bushy, narrow stems, you're pretty much bound to miss some.

The Asparagus fronds most affected were cut off and thrown away, and the plant was sprayed with neem, but I haven't thrown it out because if all else fails I can always cut it down to the soil line and let it start over. I threw out the three Hatioras that I definitely saw an infestation on, as well as another four that were in close proximity to the infested ones. I kept another ten that were on the same flat but not visibly infested, and neemed them. The Murraya was likewise neemed, because its infestation seemed relatively mild.