Still no acceptable camera replacement. It turns out that if an Amazon third-party seller doesn't feel like responding to any of your messages, and doesn't provide Amazon with tracking information for their package, there's not really any way to find out if they actually have the product they're offering, or whether it's been shipped, or whether it might be shipped in the future. And you can't exactly cancel an order either, because both parties apparently have to agree to cancel. If your seller just declines to respond to all communication on all topics, it seems they can hold an order open indefinitely.

(Amazon claims to have spoken to them on my behalf, but I'm basically positive that Amazon just sent the seller a message which will be ignored, as all the messages I've sent them have been ignored. And although I've been assured that the whole thing will be over by next Monday, there have already been multiple points in this story where Amazon's solution was to message the seller and wait two business days for a response, and then no response happened so there was no resolution.)

I've had good third-party Amazon transactions before (mostly books), but it's going to be a very, very long time before I ever try this again.

In the meantime, I don't know what to do. I have made a little progress on the Canon color balance problem, but it's still right on the edge of what I can realistically afford, and it isn't producing photos of the desired accuracy even with the progress, so I'm inclined to want to return it. And by the time you read this, the deadline to return the Canon will only be 7 or 8 days away. So now we're on Plan D. I also have Plans E, F, and G, but none of us will like Plans F or G.1

PROTIP: It would probably have saved me a lot of grief if I'd looked more closely at the seller's profile, and/or tried to contact them before placing my order. Though they had a high satisfaction rating (94% overall, out of 165 ratings) compared to the other sellers offering the same camera, and a lot of the reviews specifically praised the speed with which items shipped (part of the reason why I chose them in the first place, and paid extra for "expedited shipping on top of that), 164 of those 165 ratings happened in or before October 2015:

Which makes me think I was dealing with a zombie account: still technically active on Amazon, but no longer actually filling orders, checking e-mails, etc.


1 Plan A: the cheap but terrible Sony.
Plan B: expensive Canon with bad color reproduction.
Plan C: third-party Amazon seller to exactly replace the Olympus that just died.
Plan D: used Fuji, offered by a blog reader some time ago but postponed in hopes that the Olympus was going to work out.
Plan E: cheaper Canon from a local, non-chain business which was, itself, more money than I had intended to spend, and that I disliked the first time I saw it, but which is probably better than the terrible Sony, definitely cheaper than the expensive Canon, and much more likely to exist than the duplicate Olympus.
Plan F: abandon photography entirely; continue blog by describing blooms in exhaustive detail; lose mind during Schlumbergera season due to insufficient English synonyms for "orange."
Plan G: end blog, never photograph anything ever again, renounce all technology, locate nearby gay-friendly Amish colony, die in grisly and horrifying threshing accident.
Posted by mr_subjunctive at 3:00 AM 5 comments

Labels: everything is crap

So this camera-replacement thing is going on way too long, and I'm very frustrated about it. You'd think it would be as simple as going to Amazon and finding a third-party seller who had the camera,1 finding somebody with the best balance between camera condition, buyer ratings, and price, and then ordering it. But no. After a week, I have no camera, no evidence that the seller has actually shipped a camera, and no response to my message to the seller asking whether I would ever be getting my camera. I mean, Amazon has apparently also not charged my credit card yet, which is good,2 but the deadline for returning the expensive camera that thinks tan is green3 is approaching and I'm getting nervous.

And as if all that weren't enough, we've got a couple seedlings today that are difficult to make interesting.4 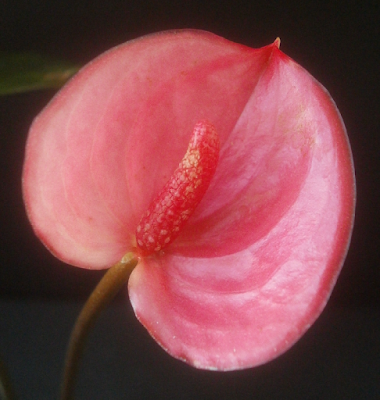 Reyna is fine, I suppose -- decent shape, and she seems to have some thrips resistance, but she's also just another pink / pink, and the foliage is only interesting insofar as it doesn't have a lot of thrips scarring, and the leaf texture is a bit unusual. 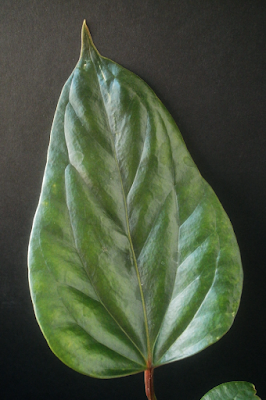 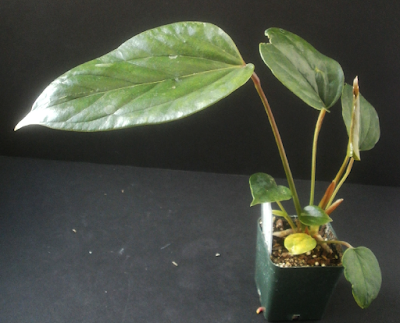 She does have interesting genetics -- she's another seedling from the NOID pink-green. All four of those so far (Reyna plus 1372 Shelita Taylor, 1373 Donet McKim, and 1750 Dreuxilla Divine) have had very ordinary colors, but in theory they could produce unusual children. Not sure if it's worth it to try, especially since I'm already basically out of space for the Anthurium seedlings.5

Almost positive Reyna's one of my own names, so there's no real queen to talk about.

0642 Bianca Donk has only produced one bloom so far, I think, 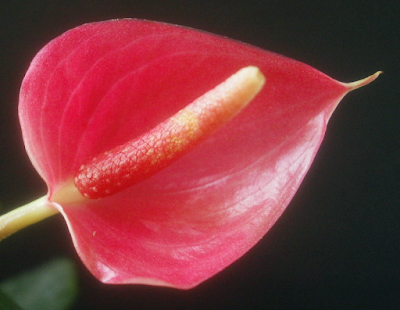 and that's actually not terrible. I mean, if we must have a pink, this is at least a strong shade of pink, and a sort of interesting spathe shape. And the seed parent was 0276 Zach Religious, who is not without his problems, but who does at least seem to bloom pretty freely, and the inflorescences are large and long-lasting. They even sometimes get more interesting with age.6 Bianca also takes after her father in that her leaves show the same sort of venation, the type I was calling "fishbone" venation, 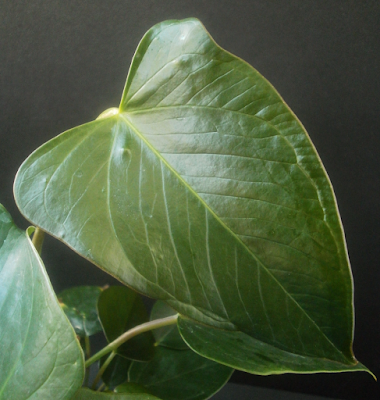 and Zach also puts a long narrow tip on the end of the spathes and leaves like this. So it's possible that Bianca would get more interesting and attractive with age.

On the negative side, Bianca waited a long time to bloom, and hasn't bloomed much since she got started. Sometimes plants bloom really hard and heavy once they're moved up to a larger pot (0105 Deanne T. Christ is a good example of this -- took forever to complete a first bloom, but once I saw that it was a good color and moved her up to a 6-inch pot, she's been knocking out one inflorescence after another ever since. Always at least four spathes at any given moment.), but that doesn't happen reliably enough to count on, and even if it could be counted on to happen, Bianca's still only pink, so why bother. Also, for all the offsetting she's doing, her foliage overall doesn't look great: 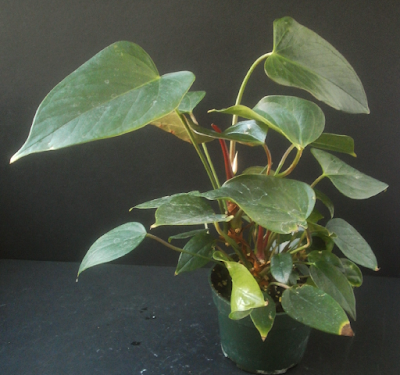 It's possible that that would also straighten out if she were given room in which to grow, but . . . ennh.

There are only three blooming seedlings from Bianca's seedling group (BN): Bianca, the disappointing 0645 Mabel Syrup, and the unfortunately-also-named-Bianca 0648 Bianca Del Rio. So none of them have been great, and there are only two BN seedlings left to look at, neither of which is very promising.7

Of the five BNs, 0648 Bianca Del Rio is the only one that might end up having offspring someday, and I'm still undecided about that. So maybe the whole batch of them was a bust. Oh well.

"Bianca Donk" is probably a name that's been used by an actual drag queen at some point or another, but I'm not aware of anyone who regularly performs under this name.


1 (a third-party seller because the camera is no longer being produced, so Amazon itself doesn't have any)
2 (if also the literal least that Amazon could do)
3 (which it still does; I have not found a way to convince it otherwise, though there has been some progress in teaching it that orange is not pink. It is also unexpectedly bad at photographing Schlumbergera blooms: it's okay on the oranges but surprisingly bad on the reds, and has difficulty figuring out where to focus.)
4 (and, uh, spoiler alert: I'm not really going to try making them interesting, either)
5 I think I'm past due for another purge. I've just been too preoccupied with the camera, and other garbage, to bother.
6 In particular, the color and veining on Zach's older spathes gets kind of weird. Example: 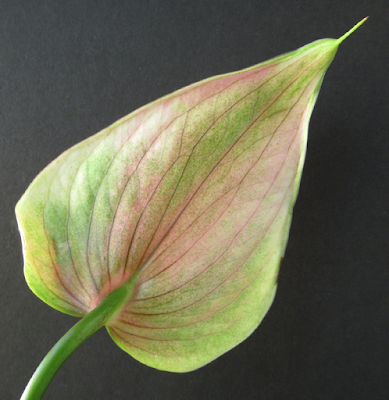 I think this is at least somewhat attractive, though it doesn't look good from a distance.
(Incidentally, this is one of the better photos the new expensive camera has managed to produce so far.)
7 0649 Layona Davenport produced a thick head of tiny foliage from lots of suckers early on, 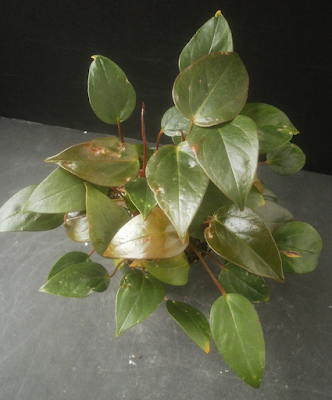 (24 May 2016)
and has interesting color on the new leaves, but she's never attempted to bud, and the foliage is falling apart lately: individual leaves yellowing and falling off, some suckers dying entirely. It's unclear how much of this is my fault (probably from miswatering) and how much is lack of stamina on her part.
0650 Phyllis Deen has larger and more-interesting foliage, but it's all chewed up by thrips, and although she's started to bud twice, neither bud managed to complete development and open a spathe.
Posted by mr_subjunctive at 3:00 AM 0 comments