There's only been one previous Pleione on the blog, which looked more or less like this, except that it was white and yellow instead of purple-pink, light yellow, and orange-red. To the best of my recollection, neither one of them had any foliage. 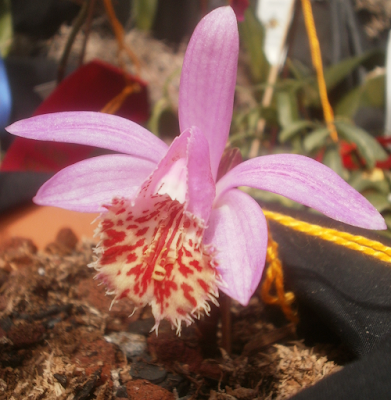 I don't know much about Pleione; Wikipedia says that they have a weird life cycle but I'm not sure I quite follow the description. It sounds like they grow leaves, drop them, and then grow flowers, like Amaryllis belladonna ("naked ladies"). Wikipedia also says that they're considered easy to grow, and that the blooms are usually either pink/purple or white/yellow. 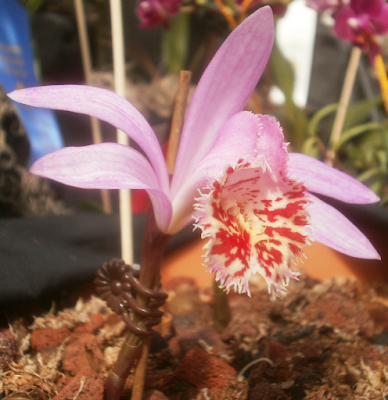 If this intrigues you at all, I ran across this site, written and maintained by a Pleione enthusiast, which has a lot more information and photos and stuff.

Alisa, the last Anthurium seedling I wrote about, is from the same batch of seeds as today's seedling, Camille. They're both the children of the NOID pink, and were sown on 26 January 2013. If they were human sisters, Alisa would be the pretty one, and Camille would be the jock: Camille's most striking trait is that she is enormous.

It's difficult to get photos that illustrate that effectively, but when you look at this, keep in mind that the pot is only 4 inches / 10 cm in diameter: 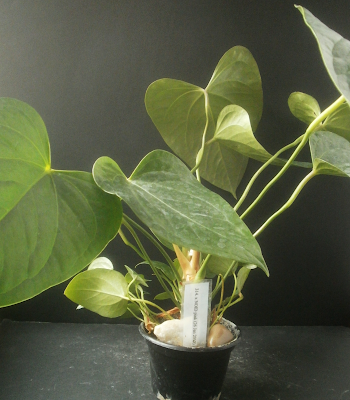 Not only are the leaves big, but the petioles are unusually long too. Camille sort of reminds me of 0255 "Steph N. Wolfe" that way. 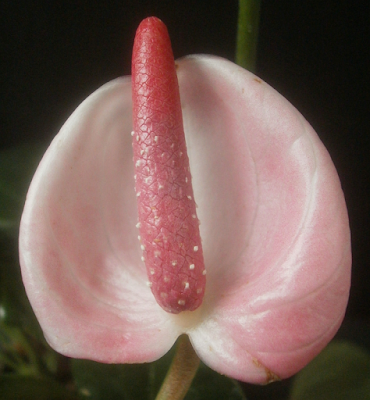 Sadly, the blooms are merely average-sized (though I suppose this is only the first try; they may get bigger), and the only special thing about the color is that the spadix is sort of purple. I like to try to guess the pollen parents, but nothing seems to point in any particular direction: the NOID pink has pretty big leaves, with a dull texture; no likely fathers have purplish spadices; petiole length sort of indicates the NOID pink, 'Pandola' or the NOID red. So I suppose if I had to make a guess, I'd guess NOID pink x itself, since the NOID pink is one of the few parents where that's plausible.

This is the only photo I have of an individual leaf. 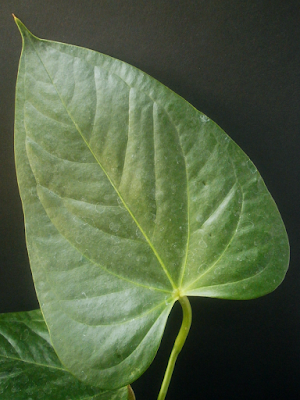 So, you know: fine, but the only thing Camille's got going for her is her impressive size. I'll probably keep her around until I've seen one or two more blooms to see what she does, because why the hell not. She may be a keeper, she may not. 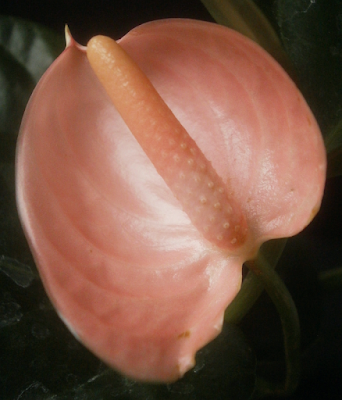 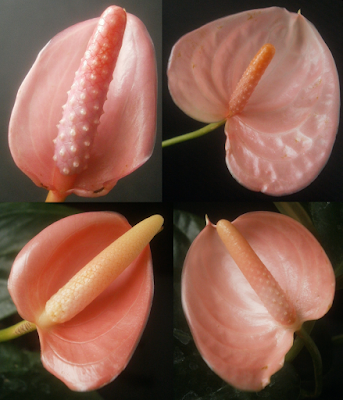 Alisa is also unusual in that she's the first seedling from the NOID pink parent to bloom (you'll see the second of its offspring in a couple days). I was not expecting anything like this from the NOID pink; if I'd known it would produce something other than a bunch of boring pink / pinks, I might have worked harder to pollinate it.

The overall plant isn't amazing, but it's nice enough. 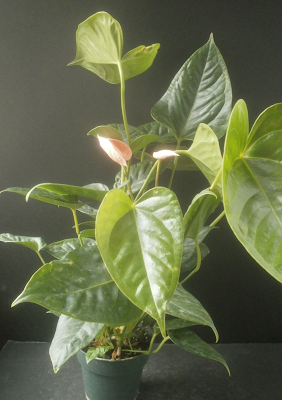 The leaves are what I'm coming to think of as "quilted," with a few very heavy veins that are sunk below the rest of the leaf, but I'll have more to say about foliage fairly soon so I don't want to get too sidetracked on that right now.1 In any case, they seem fairly healthy, attractive, and relatively unbothered by thrips. 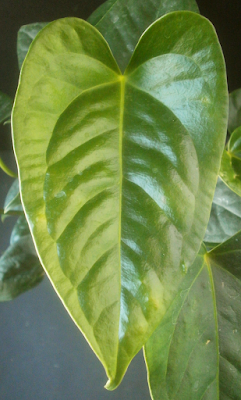 Which is actually kind of weird, because the thrips love hanging out around Alisa -- I almost always find some when I go over her spathes with adhesive tape.2 They just don't do much visible damage, somehow: either they're eating her but she's colored in a way that makes the damage not show up, or they're not eating her. Either way, good characteristics to try to breed into subsequent seedlings. Haven't managed to pollinate her yet, unfortunately, but I'm still working on it. 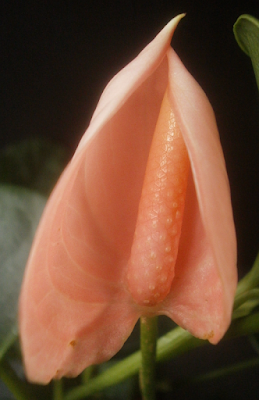 (19 August 2015)
The blooms are also fairly long-lived: they're beginning to dry out and die now, I think, but the pictures in this post were taken about six weeks ago. Six weeks is a respectable lifetime, especially considering that the plant produced two blooms more or less simultaneously, and the first blooms already looked good: they should be awesome in another six months or so. 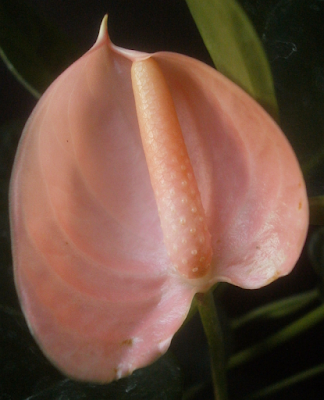 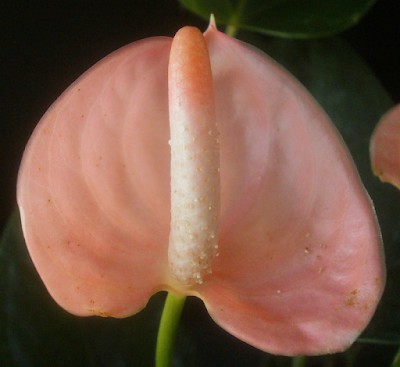 
1 I think I finally have the words with which to describe Anthurium foliage. I've been able to identify five types of venation -- not so much the actual arrangement of the veins, which I think is essentially the same for all the plants, but the appearance: which particular veins are most visible. The five terms are "flat," "fishbone," "star," "quilted," and "lizard," and I'm sure I'll explain further at some point in the future
I've also gotten workable classifications for the different leaf shapes. I know it sure looks like "heart-shaped" should cover everything, but there are, y'know, nuances.
Currently, everything fits into six categories: "heart," "square" (a broad, large heart), "spear" (a long, narrow heart), "triangle" (heart with significantly reduced lobes), "short lens," and "long lens." All of these have actual botanical terms to go with them: heart and square = cordate, spear = sagittate, triangle = deltoid, short lens = elliptic, long lens = lanceolate).
I use my own terms instead of the botanical ones because my terms fit the leaves that I'm trying to classify a lot better. (And of course they would: that's why they were created in the first place.)
2 I have recently discovered a new, entertaining thing I can do with thrips: I can pull them off the plants with a piece of adhesive tape and then watch them flail their legs under the microscope. It's not about eradicating them (which I figure is impossible), but if I can't actually eliminate them, then I can at least look them directly in their beady black eyes and make them regret their life choices briefly before they die. Or that's the idea. I don't know whether thrips can actually be shamed. Probably not.
This may also eventually be useful if I ever figure out a way to use my camera and microscope together to take decent photos, because who doesn't want to look at heavily magnified thrips?
And yes, it has not escaped my attention that perhaps sticky traps might be useful in controlling the thrips. The problem was that we occasionally used them at the ex-job (mostly for fungus gnats and whitefly), and I found them much, much more irritating to deal with than the bugs themselves, because it became impossible to pick up a plant without a trap accidentally sticking to a neighboring plant's leaves, and then you'd have to try to slowly peel off the leaf from the trap, and the slow-peel never actually worked, so we wound up with a few dead bugs and a whole lot of ripped leaves. I may still experiment with putting a few small pieces of adhesive tape around on a shelf or two of the plants, and see if they catch anything interesting, but the actual traps are too obnoxious and too expensive to use.
Posted by mr_subjunctive at 3:00 AM 6 comments