Had a minor Nina-related scare on Monday morning: I'd collected some crickets for Nina while outside with Sheba, because they're all just hanging around out there in the back yard and why not,1 but then when I went to dump them into her terrarium, Nina was nowhere to be found. Which is unusual, early in the day -- she's almost always out in the open, "sunning" herself.

So I rattled the plants around a bit, hoping to see or hear her, but I didn't, and that went on long enough that I had actually convinced myself that she was probably dead, so I started cutting back the Pellionia to find the body. (I was less sad about this than you might think: I figure she's almost certainly outlived her natural life expectancy, and has had a relatively cushy, if spatially constricted, life for the last two and a half years, so even if it hasn't been everything she might have dreamed, I think I've still done right by Nina. At bare minimum, it has to beat death by pesticide or death by freezing, which were her two options if I hadn't brought her home.) 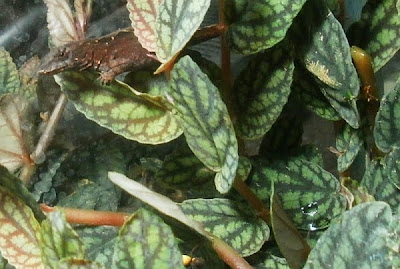 That went on for a really long time, but eventually I pulled back a branch and she bolted for the opposite side of the tank. So she's still alive. And now I have a bunch of Pellionia cuttings and have no idea what to do with them.


1 I acknowledge that there are some reasons why using free-range crickets might be a bad idea (parasites, e.g.), but have decided those are risks I'm willing to take.
Posted by mr_subjunctive at 3:00 AM 3 comments

My huge green Cordyline fruticosa should have died this summer. I got fed up with it last winter -- no matter how far from all the other plants, no matter how careful I am to wash down the leaves when watering, no matter how cool and moist the environment, it still always gets spider mites, every winter, and I've gotten sick of dealing with them. So this spring, I put it outside.

The goal wasn't necessarily to kill it. I just wanted to get it away from the other plants, so the mites wouldn't spread. It had spent a summer outside before, so I figured it could handle it. On the other hand, there was something a little passive-aggressive about my method: I didn't try to gradually acclimate it to the new conditions. I just shoved it out there and let it fend for itself. Then I "forgot" to water it, even though we weren't getting very much rain. It responded the way you'd expect: first it sunburned, then it (partly) defoliated, and by mid-August I was ready to throw it out.

So we moved it to the back yard (there's a pile where we're dumping plant-related waste, soil, lawn clippings, etc. It's not quite a compost pile, because we're not trying to manage it like a compost pile, but we do expect it to break down into soil eventually.), but then for whatever reason it didn't get dumped. And since it was closer to the garden hose, it got watered when I thought of it. 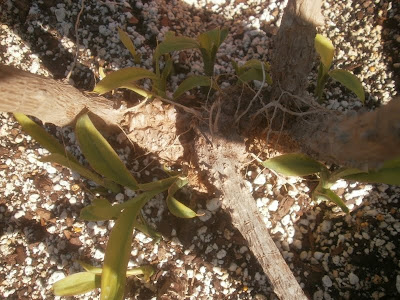 (27 August 2011) Sorry about the shadows. I didn't realize the photo would turn out quite this crappily.
And then the damn plant started to grow new shoots from its base. Apparently it had been living off the stored water and starch in the swollen rhizome at its base all summer because I wasn't watering it properly. Then we got some rain besides, so suddenly it's ready to grow again. 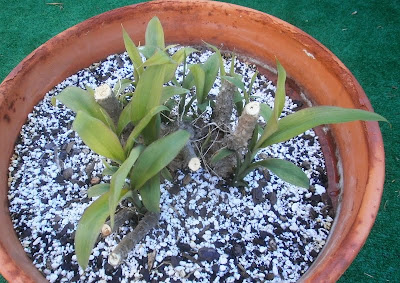 (5 September 2011)
And I guess it'll get the chance. I get frustrated with C. fruticosa because of the spider mites (I gave up on the other Cordylines at the end of June), but I really like it otherwise, and if it's just the one plant, and it's growing lots of new stems at once . . . well, I'm not made of stone. I've cut back the old stems, and the Cordyline can stay for another year, as long as it behaves itself. No doubt I'll regret this decision next February, but it's not like I have to kill it now or I forever lose the chance, right?

Next Time You Buy Madonna Flowers, Remember This

Actually somewhat less diva-ish than I would have expected from Madonna. Maybe she's mellowing. (Plus I think she's also turning into Romy, from Romy and Michelle's High School Reunion -- check out the way she pronounces "loathe.")

Posted by mr_subjunctive at 3:00 PM 3 comments

So I've had this Clivia miniata 'Aztec Gold' for a long time now (since August 2008), and I like it. It's never flowered, but that's okay: I like it well enough as a foliage plant. I mean, I'm a little disappointed, sure, because it had flowers when I bought it, and they lasted about five minutes once I got it home so I never had a chance to get a halfway decent photograph of them and now I've been waiting for over three years to see flowers again but No! It is fine! I like it as a foliage plant! I swear!

But it's also been very strange a few times. There was one spell a couple summers ago when I noticed black gunk on the leaves, so I went to wipe it off with a wet paper towel, and it turned the towel the most brilliant shade of yellow. And the black gunk was -- when I checked the plant more closely -- down in the spaces between leaves, making it more or less impossible to clean up. I never found out what was happening, but it's happened again at least once and doesn't appear to be harming the plant, so I've accepted it as part of the cost of growing a Clivia, or at least this particular Clivia, and I don't worry about it anymore. 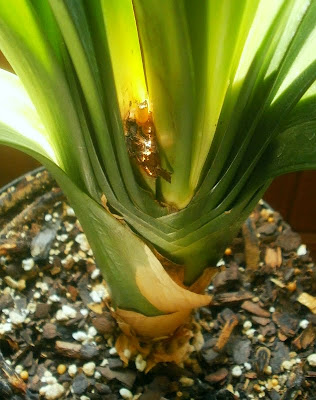 But now we have a new thing. Gone is the mysterious black/yellow substance, and instead I saw a strange new dead thing in the middle of the plant, at the end of July. It's since dried up, and once dry it pulled out easily enough, but I don't know what it was. It was too short and too thick to be a leaf, plus it was dying as soon as it appeared: could it have been a flower that aborted development? And if so, why'd it stop? If not, what was it, then? And as long as I'm asking questions: what was the black/yellow stuff?

Posted by mr_subjunctive at 3:00 AM 10 comments 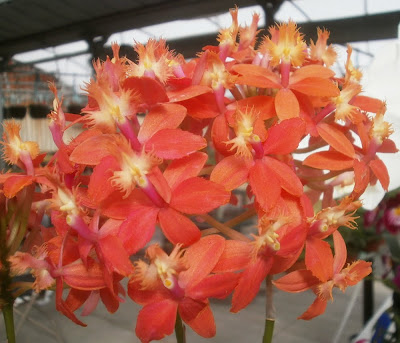 I don't think I like Epidendrums, when it comes right down to it. I mean, I try, and sometimes I think, oh, that's a nice color combination or whatever, but they just don't do it for me. Give me a few large flowers (Paphiopedilum, Cattleya) instead of a huge cloud of tiny flowers (Oncidium, Epidendrum) any day.

Not saying you have to agree. Just personal preference. I'd make an exception for fragrant flowers, but I haven't run into any straight Epidendrums that were fragrant either. At least not fragrant enough that I noticed.

I'm pretty sure this is the first time I've had an Agave offset for me indoors. One of the A. victoriae-reginaes has lots of offsets, but I think they were all present when I first got the plant, so I don't get credit for them. But this one is definitely new, and definitely all happened while the plant was in the house. 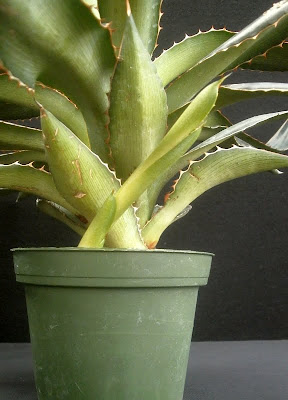 It's inconvenient timing: the A. lophanthas are close enough to one another now, and the marginal spines sharp enough, that they've been scratching one another's leaves and leaving scars. Adding a new plant into the mix, that can't be moved further away from the others, is not going to help the situation. Still, though, I'm happy if the Agaves are happy.

Found this when I went looking for music in 5/4 time. (Why was I looking for music in 5/4 time, you might ask? I don't remember.) It had somehow never occurred to me that "Fifteen Steps" (the Radiohead contribution) might feel odd and jerky because it was in an unusual time signature, or that "Take Five" might be so named because of its unusual time signature (also 5/4).

But then, there are lots of things I haven't gotten around to wondering about yet. I'm a busy guy, with limited wondering capabilities.

As a bonus musical selection -- and I realize many of you will have seen this already -- Alanis Morissette's cover of the Black Eyed Peas' "My Humps" is still a thing of beauty, four and a half years later:

Posted by mr_subjunctive at 3:00 PM 3 comments 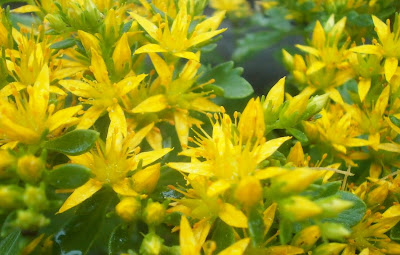 Monday, Tuesday, and Wednesday of last week were unusually productive for me. Plants got watered, posts got written, trips were taken, I caught up on e-mail, I sorted pictures, I had time and energy to deal with everything. Since then . . . not so much. Like, I spent several hours yesterday trying to write a post about Sedum kamtschaticum and not being happy with anything I wrote, and then at one point I had a random I-wonder-if-I-could-find-this-on-the-internet thought and wound up down a YouTube hole for the rest of the day. (You'll find out what I was looking for this afternoon.)