You knew this was coming sooner or later. 'Tis the season and all.

The point being that it's not clear which and how many seedling pictures I may be able to show you eventually, but most of the varieties I actually purchased or traded for have bloomed now,1 so I figure I can show you those, give the seedlings a few more days to do whatever they're going to do, and then start showing you the seedling pictures next week.

So here are the six named and NOID varieties blooming around the house lately:

The NOID yellow plant had a tough time of things during its first year here (which would have been 2011), and I moved it to the basement so I could try to salvage some cuttings in a warmer, more consistently-lit environment. Most of the cuttings failed, but one pot remained, and the surviving plant filled in over the course of a few years, such that I felt comfortable moving it back to the plant room this year. I don't know whether it had been feeling frustrated during the three intervening winters, when the artificial lights in the basements prevented it from setting buds, but it sure seemed that way: once I moved it, it budded up in a hurry, bloomed all over the place, and then was more or less finished by the time all the other plants started to produce flowers. I did try to make some crosses with it, but I don't know whether any of them actually took. 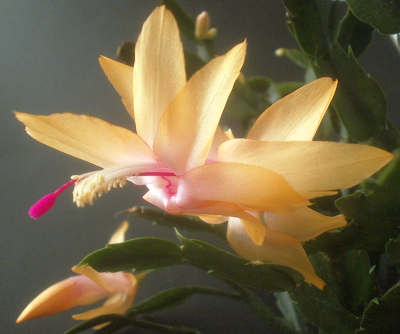 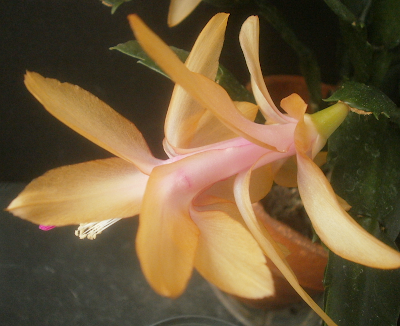 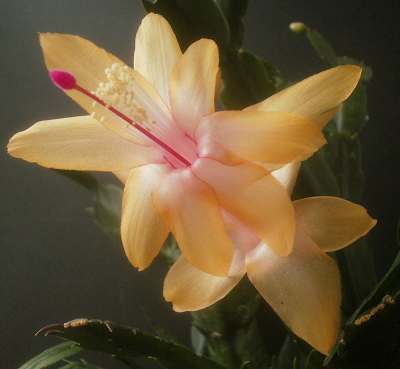 'Caribbean Dancer' remains the star of the Schlumbergera collection, both because it's damn pretty and because it's gotten big. (I've had it since 2008, though, so that's kind of to be expected. The other plant I've had since 2008, which you'll see later, is still pretty small, though at least some of that is because it's still in the original 4-inch pot.) 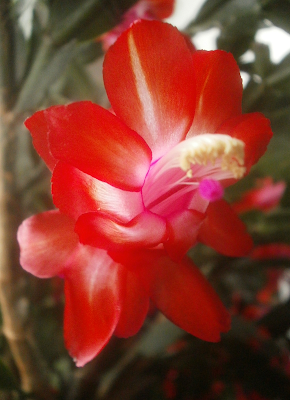 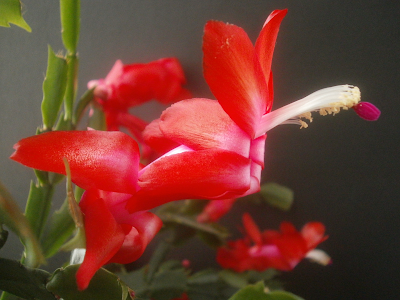 The NOID magenta has bloomed before, but this year it's working extra hard at it. It's a very ordinary sort of color for Schlumbergera blooms, but that's not to say it isn't still nice. 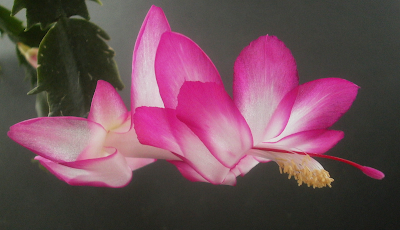 The NOID white has produced a lot of blooms this year as well -- it's the second-largest plant I have -- but the white is also not that interesting, really, and it's difficult to photograph well. 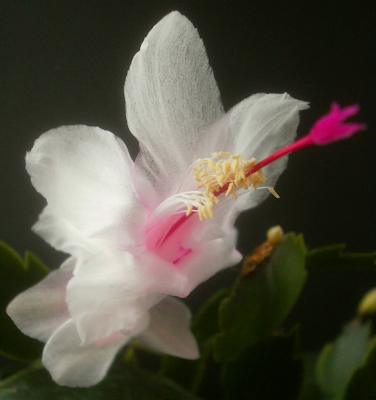 'Exotic Dancer' is blooming for the first time this year; it had previously been living in the basement and so never got the opportunity. It's more similar to 'Caribbean Dancer' than I was expecting. Not that the red and white isn't nice; it's just that from a distance they look pretty much like the same plant. 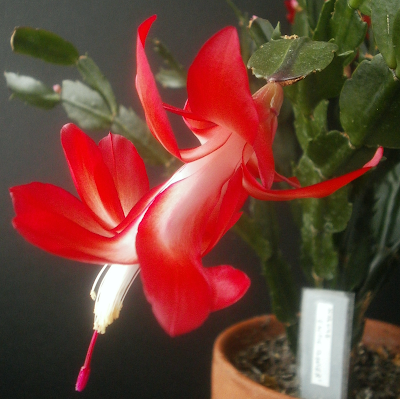 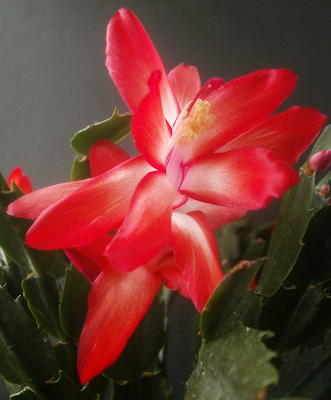 And, finally, the NOID peach, which is occasionally more of a salmon or light coral. I got it in 2008, as a cutting from work, and I'm not sure whether I knew what color it would bloom when I brought it home or not. Maybe I did; maybe I just saw some dropped segments and took them home without regard for what they were: I did that sort of thing a lot in 2008. In any case, it's bloomed very regularly, though since I haven't moved it up to a larger pot, it's still very small. Lots more white in the petals this year, it seems like, than there has been in years past. 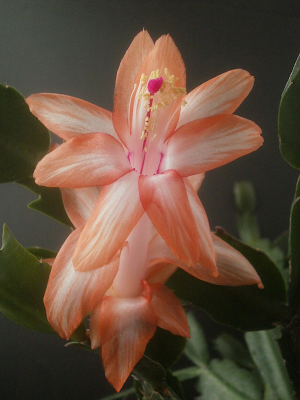 And that is that. My plan is to start with the seedling posts on 2 December; we'll see whether I can keep up with that.


1 The only ones I'm still waiting on are:
• a NOID peach / salmon which may or may not be the same variety as a NOID peach / salmon that's already bloomed,
• 'Stephanie,' which has buds, at least, but is extremely late to the party, and
• Schlumbergera x buckleyi, which in previous years has often declined to bloom at all and has no buds I'm aware of at the moment, but did bloom at least once, last winter. So maybe it will again.
Posted by mr_subjunctive at 3:00 AM 5 comments

Don't know the ancestry on this one; there's a Phalaenopsis Shu King, but I couldn't locate any Dtps. Shu anything, much less Shu Long Black Jack, on the orchid registry. 'Course, I haven't looked since March, when I uploaded this, so it's possible that there's something there now. 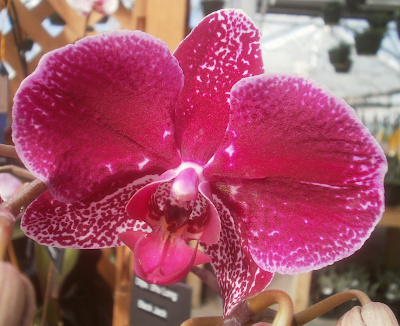 Ordinarily I might go check on that, but I am exhausted, having put together a blog post for Friday that's not an orchid post. You know, like somebody who writes a general houseplant blog would.

And then there are plans to make even more non-orchid posts for like a week and a half in December, though that depends on me getting some photos together that I have not actually gotten together yet. And also you should probably not get your hopes up, in terms of post variety or quality. But even so -- new things to look at, on a more or less daily basis, soonish. It's pretty exciting, really. Assuming I can get it all together in time.