There's still a post in the works about why I felt the need to leave PATSP for a month, but at first, I was kind of working out what had been going on while I tried to write the explanation. We're now at the point where I've pretty much worked out the reasons and am just trying to decide how to phrase it in such a way as to not sound like a whiny, entitled brat. Probably I'm also failing, of course.

When watering last week, I knocked over the Aglaonema that had produced fruits, and one of the three fruits came off. It may not have been ready to plant yet, but I figured I had nothing to lose, so I stuck it in vermiculite, and we'll see what happens. The most surprising thing about it was how large it was; the flesh of the fruit was only a thin layer around the seed. 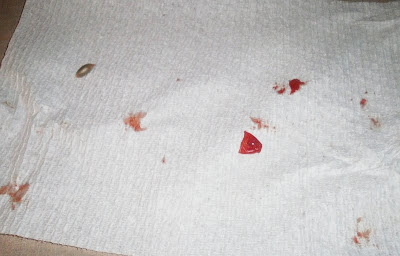 The picture quality is awful, because I forgot about the fruit for a few hours after I watered, and by the time I remembered again, it was night, so I had to use the flash. It was smooth, sort of tan-green, with a silky sheen to it, and was about 5/8 of an inch (15 mm) long. 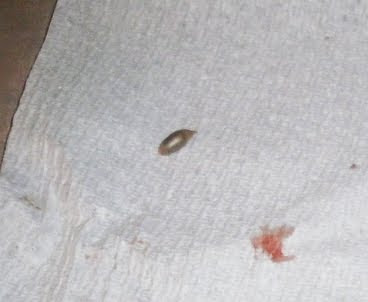 I have no idea if it will sprout; I've never tried this before. Aroid.org's recommendations for Aglaonema don't include vermiculite; they suggest varying combinations of (peat or coir) + (perlite or sand). Ufl.edu has similar recommendations, though they say sphagnum peat or sphagnum moss only. The silkiness I described may be due to a seed membrane that I should have removed but didn't; I wasn't watching for that at the time so I don't know for sure.

I haven't checked on the seed yet to see whether it's doing anything, but the odds are that it isn't. Aglaonema germination is slow. The best-case scenario is 2 weeks, and 4-12 weeks is more typical. If anything happens, I'll let you know. The other two berries are still on the plant. One is beginning to deflate a little (it was maybe damaged in the fall, even though it didn't actually come off the plant), and I should probably plant it soon; the other one I'll leave on for as long as I can, since I'm not sure when the fruits are officially ripe. (Most sources say the fruits turn red when ready, but "red" is hard to define.) We'll see how it goes. And next time I'll try something other than vermiculite, just in case that makes a difference.

I have a couple other Aglaonemas blooming now, for some reason -- 'Emerald Holiday' has had a flower open for a few days now, for weeks now 'Diamond Bay' has been producing flowers that don't open up so they're useless for cross-pollination, and 'Emerald Bay' is only beginning to produce a few flowers now. So there's a slight chance of getting a cross with 'Emerald Bay' and something else, but I'm not optimistic. I think the other plants' flowers will be gone by the time 'Emerald Bay' gets around to opening.