Saturday morning Sheba and/or Nina picture, and Mercury is still in retrograde 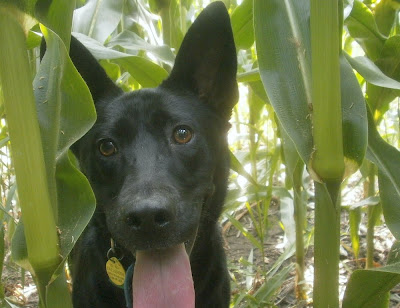 First, this is more or less the picture I was trying to get for last week's post. It would have been better if the original image hadn't been tilted by about 30 degrees, 'cause then I wouldn't have had to cut her tongue off, but hey, we're making progress, and I really like this picture despite the missing tongue, so I'm not going to complain.

I've received an e-mail from a reader who tells me that the PATSP header picture has been displaying differently for him/r for the last few weeks:

A minor change has occurred in how your page appears to me; the title block no longer has a full background of the transmitted light leaf picture: instead, the picture fills part of the title box, with a thick vertical stripe of background color at the top and bottom of the box. I think it's been like this for a few weeks. Perhaps this is purposeful, but just in case it's not, I'm using Firefox 6.0 and Windows 7.


So I was wondering whether A) this is happening for anybody else (I'm using Firefox 6.0 and Windows XP, and it looks fine to me.), and B) whether anybody has any ideas about what to do to fix it. I've tried deleting and re-uploading the photo, which didn't help. I haven't changed anything about the site except the colors and the header, and the header is exactly the same size (640 x 233 px) as the previous headers, so if they worked, this should also.

This is what the header looks like to me in Firefox: 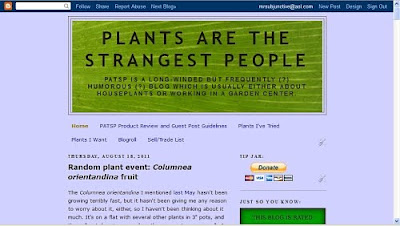 In Internet Explorer (which I never use), I get the background-color bars at the top and bottom of the header, though. How about yourself?

Posted by mr_subjunctive at 3:00 AM 13 comments

The Columnea orientandina I mentioned last May hasn't been growing terribly fast, but it hasn't been giving me any reason to worry about it, either, so I haven't been thinking about it much. It's on a flat with several other plants in 3" pots, and they all get dry at more or less the same rate, so normally I just put the whole tray in the tub, spray it down, add a little fertilizer, and move on to the next plants. For some reason this week, I took all the plants out of the tray before watering and looked at them up close, just to see if anything was going on, and I saw a fruit: 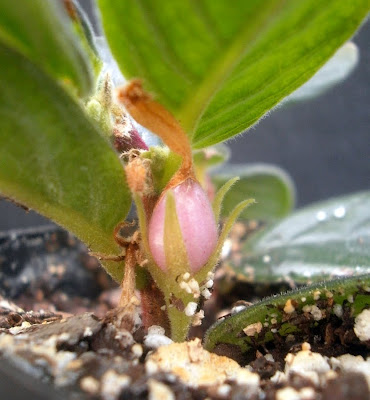 I'm very interested in this, naturally. I've tried a lot more seeds than have ever worked (the Schlumbergera seeds haven't done anything yet, for example, after a month -- though the Anthuriums are all over), so I'm not going to plan on a swarm of baby Columneas, but it'd be pretty cool if it were to work out. Keep your fingers crossed for me.

I can die happy.

I've been linked to by tvtropes.org! (For the Hothouse Flower review.) I'm so proud!

Also the main TV Tropes page for Hothouse Flower lines up pretty well with my review, too. Most of that's just that there are serious problems with the work which should jump out at anybody who reads it, but my review does make specific references to the terms or ideas behind:

And I actually linked to Fridge Logic within the review.

(WARNING: Clicking links to TV Tropes is a widely-recognized means of losing entire afternoons. Don't do it if you're hoping to accomplish anything today.)

Posted by mr_subjunctive at 3:00 PM 4 comments 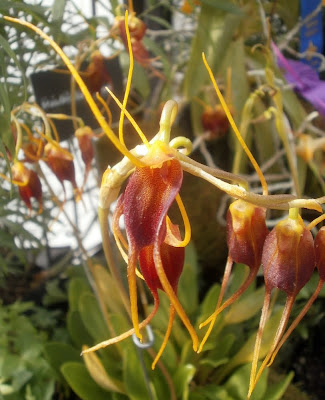 Hey look, it's an orchid photo. 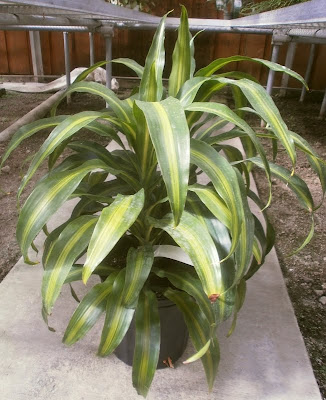 This plant (photographed at the ex-job) doesn't so much appeal to me or not appeal to me as it leaves me kind of scratching my head, wondering why it was necessary. There would be a certain novelty in having a Dracaena deremensis that looked like D. fragrans 'Massangeana,' except that according to the most recent taxonomic rearrangement, D. deremensis is D. fragrans, and although I like pretty much every D. deremensis variety I've ever encountered, it's hard to get terribly excited over strappy green leaves with a central yellow stripe, given that we already had one of those and it still works just fine.

On closer examination, there are some subtle differences. D. fragrans 'Massangeana' usually has leaves which are longer and broader, with slightly wavy margins, so an argument could be made that 'Hawaiian Sunshine' is a little tidier-looking than 'Massangeana.' 'Hawaiian Sunshine' is also a bit glossier, and according to the on-line hype, it's also better at maintaining its variegation in low light (both of which are typical of plants called D. deremensis).

I personally remain unconvinced that 'Hawaiian Sunshine' is that big of an improvement on 'Massangeana' (though I would accept free sample plants to evaluate, hint hint), but what do you think? Is the form different enough to matter? How important are glossier leaves to you? Is it a turn-off that it's patented? Do we like this? Do we care?

I actually purchased plants from a store this week. May not sound like that big of a deal to you, but it's the first time I'd been able to do that in two months, so it was pretty exciting for me. Maybe especially so, since two of the three plants I bought were reluctant walkaways, plants I'd seen and wanted but didn't have money to buy.

So what happened? Well, you remember the Plant-Chaser blogiversary thing a week and a half ago? Well, it turns out that when you enter contests, it's possible to win things. (Mercury in retrograde! Anything can happen!) Therefore, money with which to buy plants.

And here's what I got. 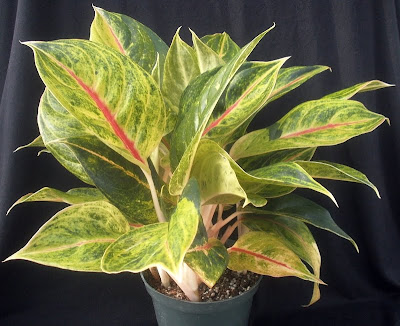 Choosing which one to get (they had all four) was difficult. 'Sparkling Sarah' I could rule out, because I already have one at home (it's doing well; thanks for asking), but I pretty much want all three of the others. I wound up with 'Emerald Holiday' mostly because 'Sapphire Suzanne' was the plainest of the four, and 'Etta Rose,' though very cool, looked close enough to 'Gold Dust' (which I have) that I thought I could probably live without it. Though part of me wants to go back and get 'Etta Rose' anyway, since it's on sale now and probably won't be for very long. 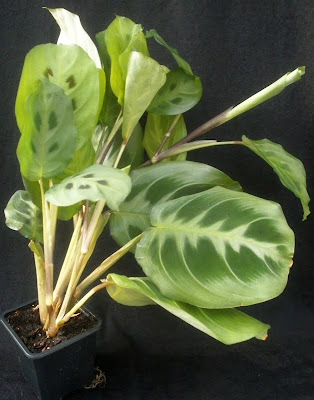 The Maranta was a sort of random choice -- I've tried four different versions of Maranta leuconeura on seven different occasions, and each eventually fell apart on me, for different reasons. The first two had spider mites when purchased; the third came with mealybugs; the fourth and fifth were clean when purchased but got mealybugs after I got them home; the sixth I underwatered; and the seventh refused (for about a year!) to root, possibly because it was too cold. So this is somewhat stupid of me, but only $1.67 worth of stupid, which I think I can afford. Maybe this time will be different. 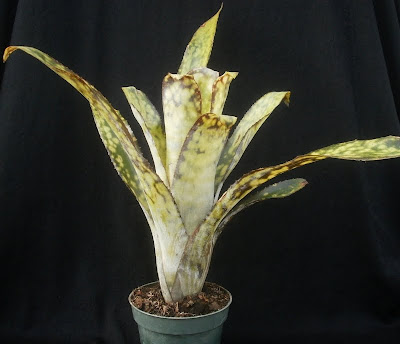 Like with the Aglaonemas, choosing the variety was a problem. When I visited the ex-job on Saturday August 6, the plants I wanted were Aglaonema 'Etta Rose' and Billbergia 'Hallelujah,' (photos of 'Hallelujah' here) but for some reason when I went back on August 10, Aglaonema 'Emerald Holiday' and Billbergia 'Borracho' looked better. Maybe I was in a chartreuse mood Wednesday.

The Billbergia is the one of the three I'm most worried about: Aglaonemas almost always love me, and Marantas almost always hate me, so I feel like I know what to expect from each of them, but I've only tried two Billbergias so far (B. nutans and B. 'Foster's Striate').

Both Billbergias have done well for me, granted, but 'Borracho' looks very different from either, and there's little information about growing it indoors. All I can find on-line about 'Borracho' and 'Hallelujah' is that both are hybrids by Don Beadle, and that although they need some direct sun outdoors for good color, Beadle recommends you not have them in direct sun indoors. He also says to keep the vase filled with water and provide good air circulation, both of which tend to be problems for me. But we'll see.

Posted by mr_subjunctive at 3:00 AM 13 comments