I am still here. I also keep having unusual, somewhat urgent things happen that are of higher priority than the blog.

1) The Amazon third-party seller has removed the camera I tried to buy from their list of products, demonstrating, I guess, that they can be communicated with. Not by me, apparently, but by somebody. Amazon continues to tell me that the order I've cancelled at least three times is being processed and should arrive by October 12;1 since the order remains technically open, I cannot rate the seller.

2) I have started to deal with the enormous backlog of images on the computer (~2500 total; I hadn't done any photo-sorting or -editing since 1 September), and as a result am feeling somewhat better about the quality of the Canon images compared to the Olympus ones, in general, and

3) I have identified some Canon settings that produce more accurate colors than others, though there doesn't seem to be a single setting that consistently produces the best results, and the Canon remains bad for color reproduction in one particular group of subjects.

The way I achieved number 3 was through brute force, more or less: I took photos of two different Schlumbergeras using all possible combinations from the two menus having to do with color balance,2 then compared the photos to one another and to the actual plant to see which combinations were most accurate, then worked backward from there to determine what settings were my best bets for a serviceable default setting. 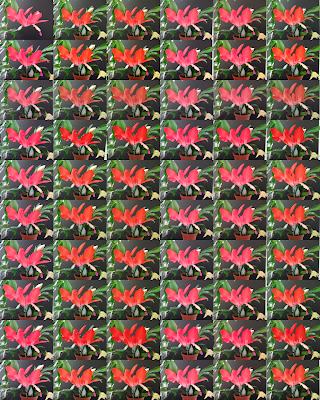 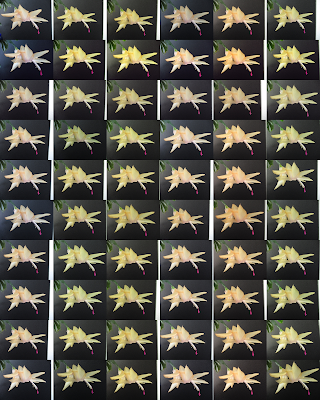 I get poor color reproduction, even with those settings, from Anthurium blooms in the peach / tan / brown area. Anthuriums 1299 (Sinthia D Meanor) and 1727 (Mercedes Sulay) in particular always come out bafflingly green and terrible. I plan to try all 60 combinations on those soon, though I'm worried that I'm going to find out that no combination of settings results in accurate colors for those particular plants. Which would be upsetting.

My hypothesis is that the Canon is confused by colors which are basically [skin tones + green], and decides to amplify the green as a way of coping with the confusion. Just a guess, though, and if true it doesn't really suggest a way to compensate.

In the course of trying to deal with a mix of Olympus and Canon photos all at once, I've done a lot of comparing of the image quality, and the Canon really is better at everything except color: the pictures are much sharper, the colors more vivid (sometimes too much so, but that's easy to fix), it takes photos much faster, and it gives better results in low light. Also the Olympus had a lot of crud behind the lens, that gave every bright object in a photo a halo, which I guess I had just gotten used to because it happened gradually and more or less disappeared if I turned the brightness down enough. The halos are really noticeable in comparison to the Canon pictures.

So if I can just find a way to cope with the skin tones problem, then we're back in business, more or less. I could even wind up happy with the new camera. I mean, don't hold your breath or anything, but . . . eventually. Maybe.


1 (fingers crossed!)
2 One menu: automatic, sunny, cloudy, fluorescent, alternate fluorescent, set white balance by pointing camera at something and telling it "this is white." There's also an incandescent option that I left off because it has always been obviously terrible and I'm not sure we even have any incandescent lights in the house still.
Other menu: off, vivid, neutral, positive film, light skin, dark skin, vivid blue, vivid green, vivid red, custom settings.
The second menu's custom settings option includes seven sliders (contrast, sharpness, saturation, red, green, blue, skin tone) each with five options. If I ran through all the possible combinations there, I'd end up getting 4,687,500 different images of the same bloom to compare to one another (4,687,500 = 6 * 10 * 57), which seemed a little too thorough, even for me.
3 The orange bloom, 101A Julius Erving, was closest to reality on cloudy + positive film; the NOID yellow looked best with cloudy + custom. The differences aren't huge, though, so I think I can probably get away with any combination of (sunny, cloudy, "this is white") x (off, vivid, positive film, vivid red), for subjects in the magenta-pink-red-orange neighborhood. Which is like 90% of the Anthuriums and Schlumbergeras.
Posted by mr_subjunctive at 3:00 AM 3 comments