I seem to have accidentally fallen into a blogging-hiatus hole. Among other problems to be detailed below, I'm really coming to despise the plant collection:1 they appear to be playing a game of chicken, to see which of them can have the most and largest problems without getting thrown in the trash. (Currently neck and neck for the lead: Agave desmettiana and Agave americana.)

Meanwhile, we've progressed from The Week of Sheba's Unexplained Itching to The Week of a Grandparent's Funeral to The Week of Contractors. A plan that was started roughly two years ago has finally started being executed, so we're getting some work done on the house, but our influence over which repairs, when they happen, and how they're performed is very minimal.2 So there are early-morning noises, and strange people coming in and out, and at one point the plant room door was replaced.3 The whole thing's been disruptive and unpleasant. It surely says something that the high point of the last three weeks was a funeral.

As for Sheba, she's back to normal amounts of scratching and biting since she started the flea treatment, which is great. Unfortunately, the improvement was accompanied by an ear infection4 and fantastic, amazing dandruff,5 so we don't seem to be winning on that front either.

The reader may recall that I've been itching quite a bit myself lately, and that it got dramatically worse at about the same time that Sheba's latest outbreak began, so it'd be logical to think that when she's doing better, I'm also doing better. But no. My problem was apparently never the fleas.6 The itching is pretty terrible on its own, but it also wakes me up at night sometimes, or keeps me from getting to sleep, which amplifies all the previously-mentioned minor annoyances. And of course I have no idea what is causing it or how to make it go away; so far, all I can really do is take Benadryl, which may or may not do anything for the itching, but at least knocks me out to the point where I don't have to be consciously aware of the itching anymore.

As I write this on Monday morning, this week has not yet made its particular flavor apparent. Depression? Loss of internet service and/or electricity? Bureaucratic runarounds? Car trouble? Whooping cough? Sinkholes? Plague of frogs? Robot uprising? Time will tell. Posting is expected to stay confined to once-a-week orchid posts for the foreseeable future.

Meanwhile, here are some bad photographs of a not-particularly-photogenic orchid. 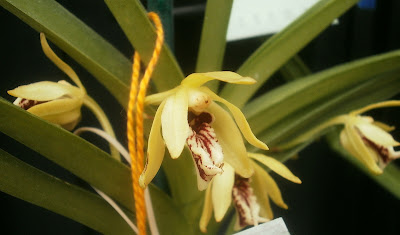 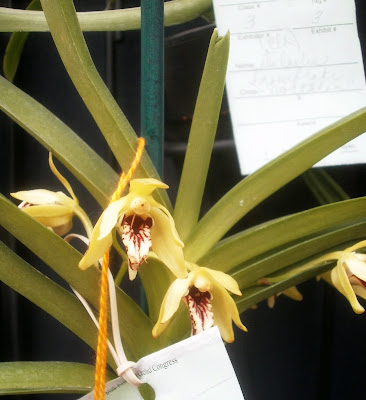 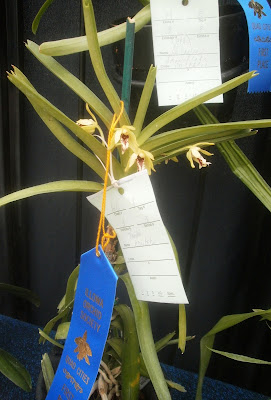 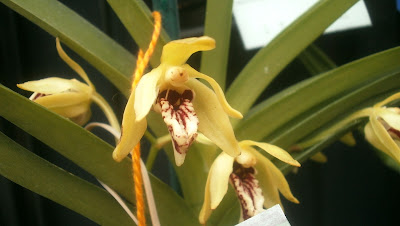 
1 Not hyperbole. I know I've said things like this before and then come back around to liking plants again, but it feels like we're surely coming to the climax of . . . something. Two years is a long time to keep a hobby that's costing more in aggravation than it's giving you in pleasure, and it's getting harder to believe that stuff might get better.
2 In mitigation: we're not paying for any of it, so it feels churlish to complain. (Not that that stops me, because since when have I minded being thought of as churlish?)
3 Not so terrible in and of itself, but they started when it was 39F / 4C outside, and involved a lot of people just standing around while there was a giant hole in the wall of the plant room, cold breeze blowing freely in and out, so I was understandably worried. (I spent the majority of that day in my office with the door closed trying to pretend that it wasn't happening.) It doesn't appear to have harmed any of the plants yet, but this wasn't that long ago, so they could just be slow to react.
4 Not diagnosed by the vet, but the smell is awfully familiar, and obviously emanating from her ear, so.
5 If I were a dandruff connoisseur -- and you know that one has to exist, somewhere -- this would be the best week of my life. Right up there with the first time I ever saw The Breakfast Club, probably.

^ This .gif is also a pretty good representation of how I feel when my itching gets really bad.
6 (which might explain why I never saw any)
Posted by mr_subjunctive at 3:00 AM 20 comments