Nothing terribly exciting going on here with Sheba; her bald patches haven't really changed since the last time I mentioned it, two weeks ago. We're giving her the Benadryl a little more often, but the whole process is still a little disorganized. 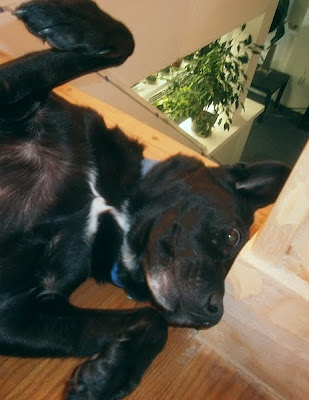 This photo was taken at the top of the stairs to the basement. Which is possibly obvious.

Nothing's new with Nina at all, though it looks like the Peperomia puteolata is going to work out okay in the terrarium.

This is the second time photos of these flowers have been posted; the first time was back in 2010. This time around, the name was more complete: "Masdevallia Peaches and Cream (ignea x constricta)," as opposed to just Masd. ignea x constricta, which I appreciate.

I stand by my previous comments. This is probably my least favorite Masdevallia, of all those I've posted photos of before. (The most favorite would be Masd. Sunset Jaguar 'Night Breed', posted earlier this year.) The shape is fine, but that color just does nothing for me at all. 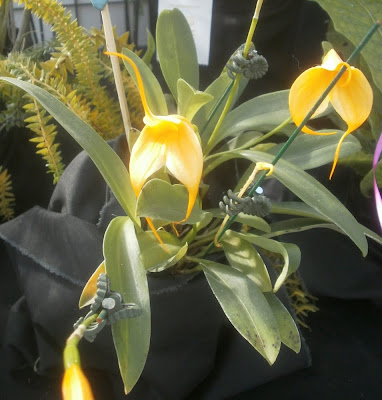 The photography could probably have been better too; looking at these pictures now, I'm struck by how washed-out everything looks. Oh well.

Edited to add a Scalepocalypse 2012 update:

I think these are maybe Rhipsalis rhombea, but I'm not sure. The tag when I bought it said it was Rhipsalis micrantha, but I decided some time ago that the tag was probably wrong.

In any case, I bought it in March 2011, and it flowered for the first time in February 2012. The flowers are self-fertile, and will produce fruit on their own, so I had seeds a short time later. I started the seeds on 15 Jun 2012. This is where they were as of mid-August: 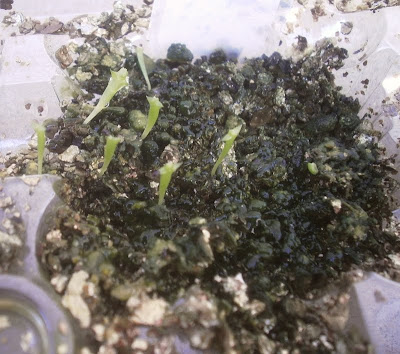 For a sense of scale: the square of vermiculite in the photo is about 2 inches / 5 cm on a side. The vermiculite isn't normal vermiculite color, because I used un-sterilized vermiculite from a previous project, so there's . . . black stuff on it. I don't know what the black stuff is. I suppose it could be something bad, but I have more fruits, and they're fast germinators, so I can always start again.

And by the way: I know it'd probably make more sense to propagate cuttings, if I were going to propagate this plant, but 1) previous attempts to root cuttings have mostly been unsuccessful, and 2) if one of my plants produces seeds, I am unable to resist trying to germinate them.

No tag again. Interesting flower, though the picture perhaps doesn't do it justice. 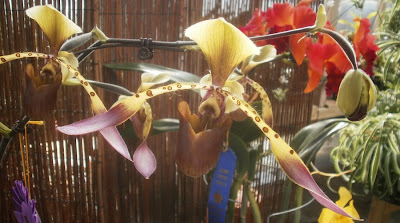 It's occasionally very weird to me to realize that a plant as unusual as this one actually lives in a person's house (or greenhouse, at least). And most likely, it's a house that's not even that far away from me. Midwest, at least.

There's not really anything more to that thought; I just occasionally have to recalibrate my sense of what's exotic and what's mundane, and I guess this is one of those times.

I had a similar moment a couple weeks ago, except about age/time instead of exotic/mundane, when I realized that I own and use a set of towels that are older than most of this year's University of Iowa freshmen. (Towels were from 1991; the freshmen are mostly from 1993-94.) I suddenly felt very, very old. Also highly committed to buying our next set of towels from JCPenney, 'cause damn. Some quality towelage there.