And then I caught a cold, so there went another week. This year I seem to be catching every single illness that's going around: cross your fingers for me that the flu shot works this year.1

So. Alexis. Alexis is mostly notable for being a color combination that I wouldn't have guessed possible and have never seen before: green and orange. 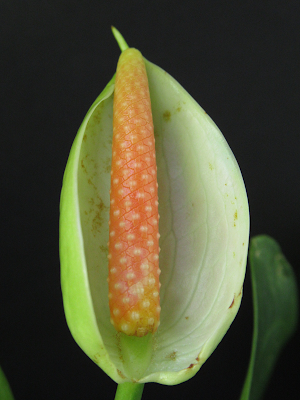 Which more or less speaks for itself, I think. I mean, I don't have any explanation for it. The seed parent was 0334 Jean Poole, which is red / pink, about as opposite as you can get from green / orange: 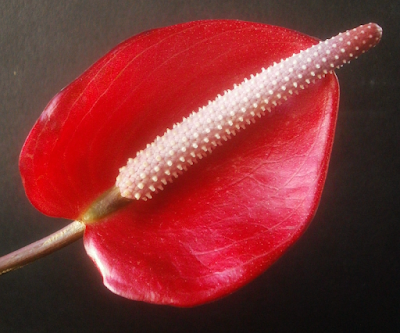 So where did the orange and green come from? [shrug] The pollen parent, I suppose. But I don't know which one that was.

As with previous green-blooming seedlings (1419 Maya Douglas, 1720 Mado Lamotte), the intensity of the green fades as the spathe matures. This is the same bloom as the one above, three days later: 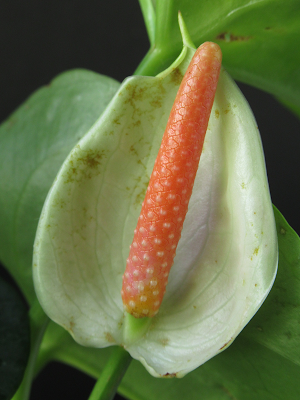 Not a huge difference, but it just kept getting fainter from there; by the time it died, it was basically just white. Didn't get a photo of that, though.

The foliage is surprisingly large and abundant, which may not actually be ideal for a flower that blooms green. One does want to be able to see the flower among all the leaves. 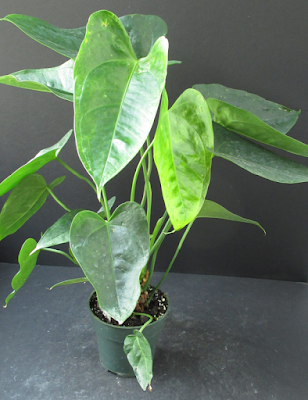 Some thrips scarring, too, which isn't ideal. I've seen worse, I suppose. Though thrips damage shows up really well on the spathes, which makes me sad. 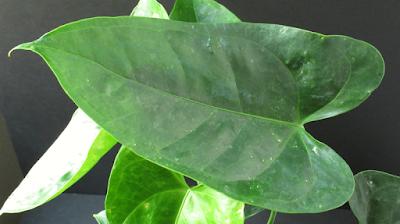 I don't know that I'd call it beautiful, but this is the sort of thing I had been hoping for when I started growing out the seedlings. I was never going to see this in a store; it's cool that it exists. I'm actually surprised that it's possible: I don't think I've previously ever had an orange spadix that wasn't accompanied by a red, pink, or orange spathe. What other combinations might be possible that I haven't seen yet? White/purple? Green/purple? White/orange?

The Anthuriums, as I mentioned in the last post, are kind of falling apart on me: I ran out of room to keep expanding, and I haven't been culling the herd on purpose, so I have lots of seedlings in spaces too small for them to fit, and a lot of seedlings that really need to promote to larger pots but can't because there's no space for them. At some point, I do intend to rearrange them all and promote a few and so forth, and when that happens, Alexis is a strong candidate to get promoted to a 6-inch / 15 cm pot, but there's so much competition that I can't promise her anything.

In unrelated news: I happened to be in a houseplant-related establishment this week and saw a Dracaena marginata variety I hadn't seen before: the shape and proportions were the same as any other D. marginata, but the coloration was dark green with a yellow-green stripe down the center, more or less the same as D. reflexa 'Riki,' but on thinner, lighter leaves. I didn't take a picture,2 and I didn't buy it,3 but I still thought it was interesting enough to follow up on.

Best guess as to variety name: 'Ray of Sunshine,' per this, this, and this, though there's a 'Sunray' here that looks like basically the same thing. So much like the same thing, in fact, that I suspect someone's trying to steal someone else's patented plant by changing its name slightly.


1 According to the CDC website, the dominant strain this year is influenza A(H1N1)pdm09, the flu that caused the 2009-10 pandemic, which you may remember from all of the You Are Totally Going To Die Of The Flu stories you read that winter. My understanding is that it actually caused milder symptoms in most people than the average seasonal flu, but it also had the ability to infect cells deep in the lungs (normal flu viruses are limited to the nose and throat), and consequently resulted in a higher number of deaths among people under 50 than is typical, which is why the media freaked out so hard about it.
The vaccines available last fall were intended to protect against A/Michigan/45/2015 (H1N1)pdm09-like, so I'm not actually super-worried about getting the flu. It's just that I've gotten everything else, it seems like. Which is remarkable for someone who barely ever leaves the house.
Alarmingly, Wikipedia says that about 33% of people with influenza have no symptoms. (The source is this study, in which healthy volunteers were deliberately infected with the flu.) I wouldn't have imagined that that number could be so high. This is one reason why it's important to get the vaccine even if you "never" get the flu, or you've had it before but it was no big deal: if you get the vaccine, not only are you personally less likely to get the flu, but the people around you are also less likely to get the flu. I'll grant that getting a shot isn't as dramatic or emotionally gratifying as taking a bullet for someone or charging into a burning building to rescue a small child, but getting the flu vaccine every year may in fact save more lives. And we can safely assume that it's considerably more pleasant than either of those options.
2 I didn't have it with me, because the camera gets dust behind the lens so easily that I don't take it anywhere.
3 $25 for three plants in a 6-inch pot, which maybe isn't outrageous, but that's a lot of money to spend on a plant I don't even particularly like, new color variety or no. Show me a Yucca guatemalensis with this coloration and I'd happily pay twice as much, though. Not kidding.
Posted by mr_subjunctive at 3:00 AM 3 comments