Walterina is more interesting than most of them have been lately. This is damning with faint praise, but it's as good as they get for a while, so let's try to enjoy it. 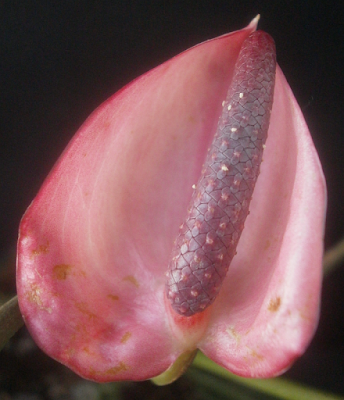 (The first bloom; photo from 9 February 2016.)
I'd previously guessed that most of the seedlings with ID numbers between 400 and 550 either had 'Krypton' or the NOID red-violet as pollen parents, but Walterina is probably not one of those, based on the dark purple spadix. I don't have any idea what recessive genes my founding varieties might contain, so in theory any of them could be the father here, but only two of the founders have dark purple spadices: 'Red Hot' and the NOID purple. Neither of those has a pink spathe, but 'Red Hot' has a red spathe, which is close, so my guess for parentage is 'Orange Hot' x 'Red Hot.'

The plant as a whole is kind of meh, 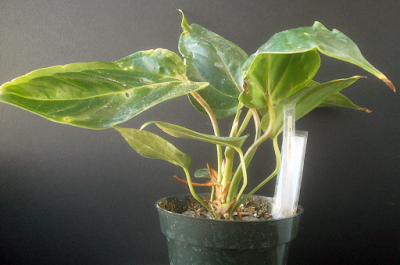 The sandy-looking stuff on the leaf at left is vermiculite; this picture was taken during the predatory mite experiment and that's what they were packed in.
and Walterina has begun to show signs of scale lately, too. Since she's unusual, she'll get more chances to shake them than most seedlings do. 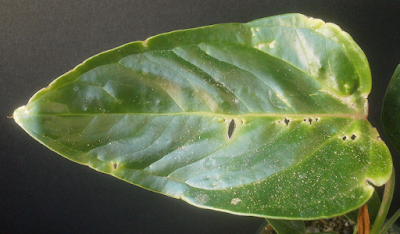 A close-up shot of the dusted leaf. I don't know what's going on with the holes here but I'm assuming it's thrips.
I'm not ruling out an up-potting, followed by treatment with imidacloprid: seedlings seem to be more scale-resistant when in larger pots, and although imidacloprid is useless for thrips, it does seem to be useful against scale. Haven't done it yet because I've been really busy and/or exhausted for the last few weeks, but eventually, maybe, if Walterina's still around. 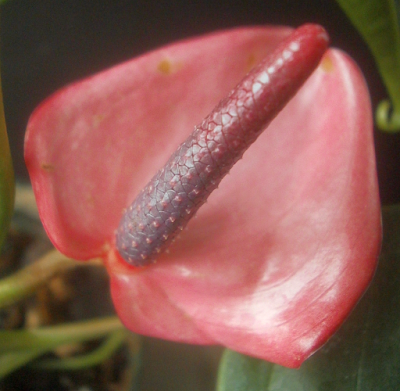 (The second bloom; photo from 31 March 2016.)
So an interesting seedling, with unusual genes, and I would like to keep her, but I may wind up discarding her in the end anyway due to pest problems. We'll see how it goes.

And here's the last orchid from the 2015 show: t'll get you prepared for the crappy 2016 photos. (The good news is that, although they're not great photos in general, a respectable number of them cleaned up well, and a few actually managed to be good pictures despite everything. Also, there will be a lot of them: 69 posts to cram into 52 weeks, the most I've used since the 2012 show. So what they lack in quality is maybe partly made up for by quantity, and they'll be coming at you faster than they did in 2015.)1 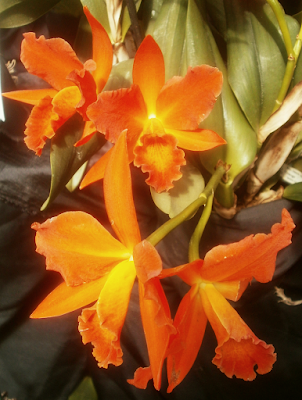 While the flowers on Cattlianthe Jewel Box 'Orange' did have a crazy, glow-in-the-dark sort of feel in person, my camera doesn't capture it well, plus it looks like I went a bit too far with the saturation adjustment. 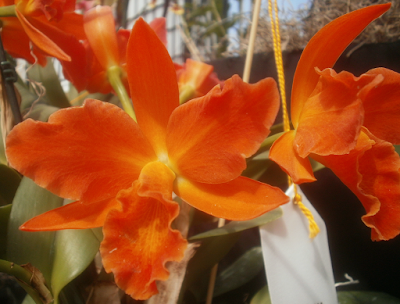 Not a lot to say about this otherwise, aside from noting that Guarianthe aurantiaca sure is popular for breeding.


1 In retrospect, I should have edited the 2016 photos and then scheduled the posts, which would have given me the option to reject photos that weren't working out well. That I didn't do this obvious thing suggests that maybe the time pressure was getting to me.
Posted by mr_subjunctive at 3:00 AM 0 comments

Since I'm still trying to deal with the orchid posts right now, and since it's pretty obvious that Barb is not one of the better seedlings, I feel like maybe I don't need to get into a lot of detail here. She has the most boring color combination, and executes it poorly. 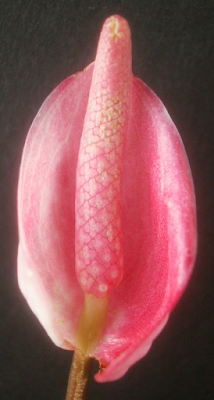 Leaves aren't perfect, but are surprisingly good, given that she's in the (mostly terrible) BH seedling group. Have seen thrips on her, but no scale yet. 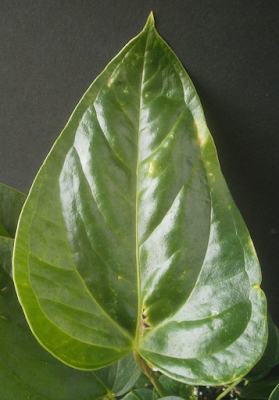 She has a reasonable, maybe even good, amount of suckering, though that doesn't count for much. 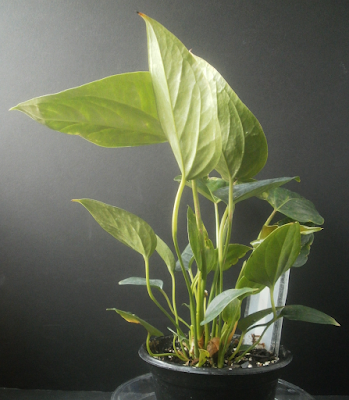 More optimistically, she's produced two more buds since these pictures were taken: I don't expect them to be significantly better than the first one, but we can always hope. Probably not a keeper, though.

So it's March 24, and I'm approximately hip-deep in orchid photos and post preparation. As a result, I don't have as much time to sing Beth's praises as she deserves, but aside from one thing, she's pretty nice: 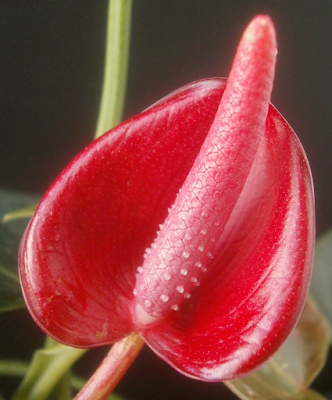 By now, there's nothing particularly special about this color combination -- Beth is awfully similar to 0144 Graham Reaper, the late 0213 Nadya Falt, and 0423 Georgeanne D'Dragon, among others -- but it's uncommon enough. (I think I mostly like it because none of the founding varieties have this coloration.)

The one problem with Beth is scale. She doesn't have a massive infestation going on, and I'm optimistic, but she stayed clean so long that I'd thought maybe she was resistant, so it was a bummer to see the spots of honeydew.1 We'll see.

The leaves are nice and large, relatively unbothered by thrips: 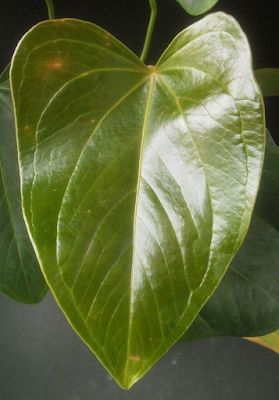 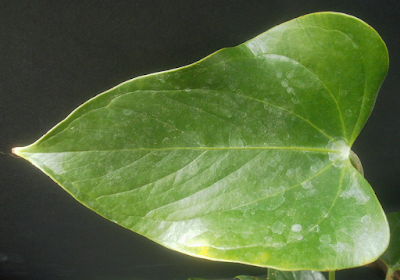 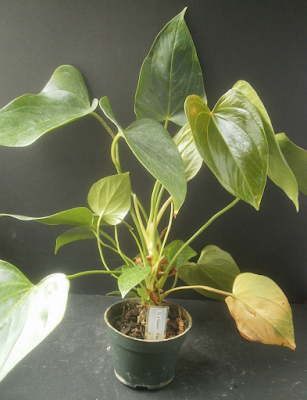 So she's a keeper, if the scale problem can be solved. Which is a mighty big "if," obviously, but there you go.


1 Insane though it is, when I water the 4-inch Anthurium seedlings, I inspect them individually for scale infestation at the same time. Not literally every leaf, front and back, but a representative sampling. I'm thorough enough that I usually see spots of honeydew, rather than actual insects, but not so thorough that I don't see a mature insect from time to time. I don't want to spend my entire life squinting at leaves, after all.
3-inch plants get inspected periodically, when I have enough spaces open in the 4-inch flats that I can think about promotions, but that only happens every couple months or so because there are so many of them.
6-inch and 8-inch plants (oh yeah, 0334 Jean Poole recently became the first seedling to move into an 8-inch pot, because she was enormous) mostly just get glanced at from time to time. I figure by the time they're in a 6-inch pot, they've been around long enough that if they were going to develop a scale problem, they'd have done so already. This faith is, er, mostly supported by observation. Some of the more recent promotees have brought scale with them from 4-inch pot to 6-inch pot; I'm particularly worried about 0091 Bob Sharunkle (who has also been accidentally decapitated) and 0408 Tex Messich.
2 (holy crap!)
Posted by mr_subjunctive at 3:00 AM 0 comments