For all the problems of the Anthurium seedlings lately, there is one bright spot, which is that I have sort of found a way to manage the thrips without going bankrupt or devoting myself to thrips-management 24/7.

For a while now, I've been reluctant to spray water on the Anthuriums because I didn't want to wash off the white oil, or predator mites, or whatever the treatment du jour happened to be. But since giving up on all of those, I've inserted a step in the watering process: it's now 1) water, 2) blast the crap out of the blooms and foliage with the sprayer set to "flat," 3) add fertilizer and allow to drain for about 10 minutes. This isn't sufficient to completely eliminate the thrips,1 but it does remove enough of them that I've seen improvement, especially on the leaves. For example, compare old and new leaves on 0420 "Adriana Le Glam:" 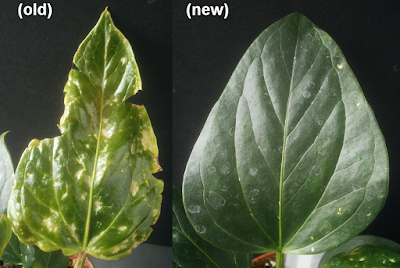 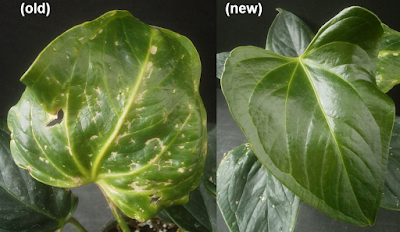 Results not typical, sure, but the seedlings that get better get way better, and none of the seedlings seem to be getting drastically worse. Not really any reason not to keep doing it, especially since it doesn't take a lot of extra time or money.2

None of that is directly relevant to 0527 Ms. Lucia Love, whose foliage has never been very damaged by thrips in the first place, but I thought that after the last Anthurium post, maybe I owed it to y'all to find something positive to report. 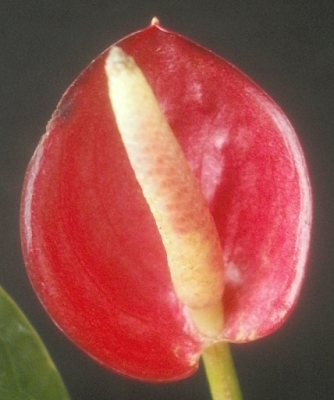 (30 November 2015)
As for Lucia, well. The one bloom so far has been pretty small. Thrips damage is about average, maybe slightly better than average. More than I'd like, in any case. She does have one interesting quality that I don't believe I've seen in any previous blooms, which is that the spadices start out yellow, in contrast to the red spathes, 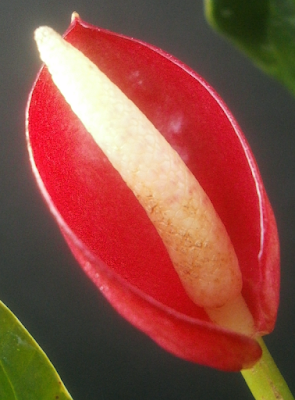 (24 November 2015)
And then change over time to a color that matches the spathes: 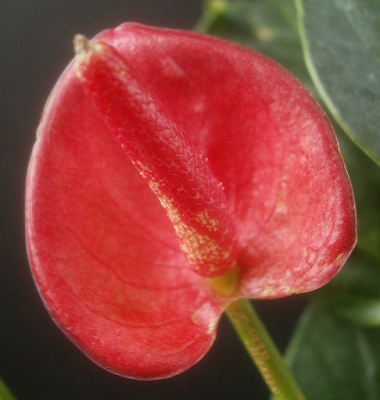 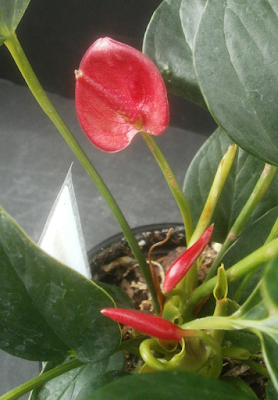 So that's neat enough to buy her some time. It helps that her leaves have been, so far, mostly unscathed by thrips -- 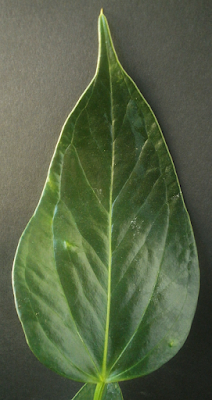 -- and that the plant overall seems reasonably healthy and well-formed. 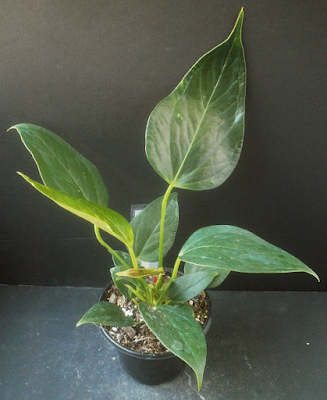 So maybe not the most amazing seedling ever, but fairly healthy, enthusiastic about blooming, and doing something I've never seen before. Lucia gets to stay for a while.


1 And it's useless for the scale, as far as I can tell: the only remotely effective control for them is zero-tolerance. Though since imidacloprid has sort of helped in the past, and zero-tolerance is sort of helping in the present, the combination of the two might be just the solution I'm looking for (especially since I already have some leftover imidacloprid from the last attempt). I mean, probably not. And for the moment I don't really want to invest the time into applying the imidacloprid; I've only just gotten life back to normal after the mass Schlumbergera bloom. Maybe soon, though.
2 The worst thing about it is that I wind up spraying myself with the water to some degree or another, so I spend large chunks of Anthurium-watering days (Monday, Tuesday, and Wednesday) slightly damp. Which is uncomfortable.
Posted by mr_subjunctive at 3:00 AM 2 comments

I have no notes written for this one, so I guess it didn't move me particularly when I saw it at the show. It seems okay, I guess. 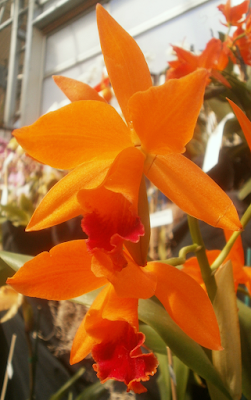 We've seen its pollen parent, Cattlianthe Trick or Treat, before, in 2012; compared to Trick or Treat, Love Passion is much more yellow, with larger but fewer blooms. And it photographs better.

102A has, I think, only produced two blooms so far, which isn't really enough to go on as far as determining whether it's a good seedling or a bad one or what. 030A "Diwali" sucked for an entire year before straightening itself out, after all. And sometimes flowers just don't photograph well. But so far . . . I'm not that impressed. 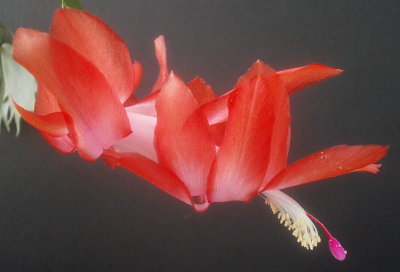 After 17 pages of TinEye results, plus two names from the emergency list, I managed to get 37 name options, of which eight seemed like they could be serious contenders. In the order I managed to eliminate them from consideration:

I'm afraid we're going to have to go a couple of generations before Judith regains its mythological associations. Everybody loves a woman who can perform a solid beheading when necessary, but the name currently makes me think mostly of an acquaintance from college (who seems unlikely to ever behead anybody though I suppose you never know) and Rick Grimes' baby in The Walking Dead (who hasn't either, being an infant, though given her circumstances I imagine she's a lot more likely to do so eventually than college Judy). And if we're going to name seedlings after anybody from The Walking Dead, it should be Michonne.1 (So what the hell: let's add Michonne to the emergency names list.)

Gamma Ray feels almost right, but it should be a different color than this. Like a weird blue-purple, or maybe a science fiction yellowish green. Red-orange is way too normal.

"Shipyard," one of the tags on this photo, brought to mind Shipbuilding, the Elvis Costello song, which I considered for a little while. Unfortunately for the name, this also inspired me to pay attention to the lyrics, which are depressing. (Timely! Always timely! But depressing!) And just seeing the word gets the song stuck in my head badly besides. So I'm going to hurry past Shipbuilding and hope that it doesn't get stuck in my head again.

Tokyo works in the same way that Alberta did, long ago, for seedling 054B: the color fits in some way that makes sense to me even though I can't explain why. There's at least one name I like better for this one, though, and the seedling isn't otherwise connected to Japan, so we'll pass on Tokyo. 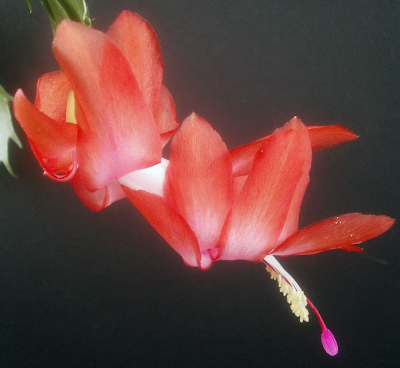 I really like the photo on Glass Heart for some reason, and I don't even mind getting "Heart of Glass" stuck in my head, but it seems to me like a Glass Heart Schlumbergera should have a stronger contrast between the petals and tube. A red and white flower, maybe.

Easter Island (or Rapa Nui, the native name) aren't terribly interesting on their own, name-wise (though the photo is cute), but I wound up down a wikihole for quite a while, learning bits and pieces about Rapa Nui and its history. What matters for this post, though, is that the Rapa Nui language has a quirk that I found interesting, which is that in at least some (if not all) cases, doubling a word makes a new, related word. So kume, which means to undo, can become kumekume, to take to pieces. Ako, to sing or recite, turns into ákoáko, to recite hymns in honor of a deity. Some Googling turned up a Rapanui-English dictionary, so I looked around for any Rapanui words that might cover this color, but I didn't really find any -- they seem to have a lot of words for red,2 but I'm not sure any of them imply reddish-orange plus pink. Maybe Hegahega, I suppose, if it's related to the red of dawn.

The last name I've got is Casino, which is awfully generic (Which casino? What about the casino?), but appropriate in a couple ways: one, casinos tend to have a lot of red, yellow, and orange in them, and two, I don't know what the later blooms are going to look like. I mean, I can guess the color easily enough, but it hasn't produced enough blooms for me to have a sense as to whether it's going to be one of the good seedlings or bad seedlings, so keeping the seedling around at all is, in a very (very!) loose sense, a gamble.

Initially, because of the ambiguity of the seedling's quality, and the color, my intention was to go with Casino, but the more I think about it, the more I feel like the name would need to be a little more specific for Casino to work. ______ Casino, or Casino ______, something like that. And anyway Hegahega is a more interesting word, I think. (I could combine the two, as Hegahega Casino, but that doesn't really make "casino" any more appealing to me.) 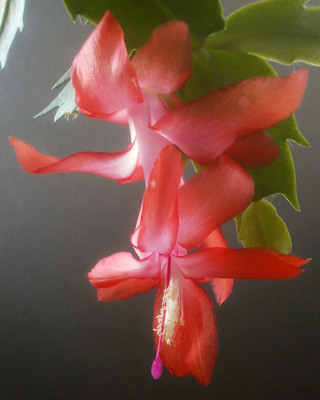 So I have managed to eliminate the entire original list of options. Whoops. There are still Hegahega and Michonne, I suppose, but if those are my choices, it's no contest. I sort of hate to name a seedling of questionable quality after Michonne, who deserves a seedling of obvious awesomeness, but maybe it will, like, motivate the seedling to be better if it has to live up to the name.


1 I have not yet seen the most recent half-season of The Walking Dead. If you have, and Michonne has become less awesome, please let me know about this without spoiling me as to how she's become less awesome.
2 Hegahega (reddish, ruddy; maybe related to hehega, to dawn?); herohero (crimson, bright red, also the ripe color of any fruit); mea / meamea (light red, rose); retoreto (bright red, flaming red); úraúra (bright red; possibly related to ûra, to flame, blaze, or become furious?)
Posted by mr_subjunctive at 3:00 AM 4 comments