We've seen this variety before, pretty consistently from year to year, even (2010, 2011, and maybe 2012), which makes me wonder if it's not just the same plant coming back over and over. 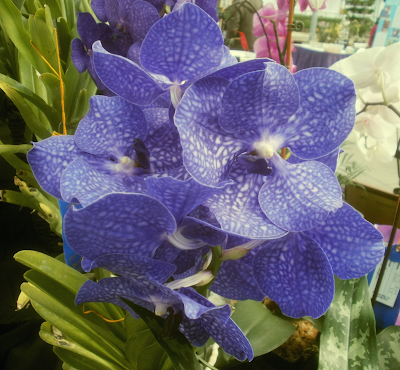 I mean, the only other explanation that would make sense would be that maybe there are just a lot of them out there. But I've only ever seen one per year at the show. So it's probably the same plant over and over.

Anthurium #334 "Jean Poole" is developing nicely but has still not opened yet.

The other three new Anthurium buds (#132 "Eve Stropper," #241 "Megan Gigaterra," and #259 "Tasha Salad") are all still doing okay, but are so far from being ready to open that I'm trying not to get too excited. There's a first-ever bud on #594 ("Charity Case") as well. (Light to medium pink so far: nothing too exciting.)

First-generation berries: Anthurium 'Joli' (medium-sized, lavender to hot pink to orange-red) has in fact been pollinated. Still can't tell about 'Florida.' (huge, orange) Should have seeds to sow from 'Midori' (large, green) just any day now, as well as six spadices' worth of seeds from 'Pandola.' (large, pink)

Second-generation berries: nothing much on the horizon at the moment save for #203 "Anna Mae Hemensouz" (medium, dark red) and #231 "Rhea Listick" (medium, purple-pink). #234 "Ross Koz" (medium, purple-pink) has some berries forming but it seems like I've been waiting on them forever; ditto for #245 "Sawyer Ad" (medium-large, red) and #276 "Zach Religious" (medium-large, pink/red). I'm getting ready to move another set of seedlings into 3-inch pots soon, to make more room to start seeds, so expect the plant census to make another big jump. I could well wind up with 2000 by the end of 2015, if this sort of thing keeps up.