I was excited about this for about five minutes, when I first saw it. But this is just more foliage, not a flower bud, right? 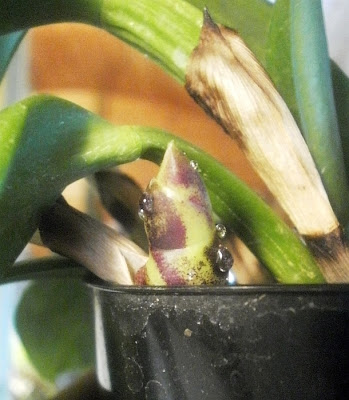 I've had this particular variety of Haworthia since August 2004. It's never done anything mind-blowing, and it hasn't even looked particularly good for the last several years, but it's survived all kinds of really non-ideal locations for nearly a decade. As you probably know by now, I will happily sing the praises of any plant that happens to be durable, whether or not it has any other redeeming features, so this is a wonderful, wonderful plant, as far as I'm concerned.

Then this winter, during one of the reorganizations, I had the thought that maybe these Haworthias (there are three of them, all clones of the original) would be happier and would do better if I gave them a brighter spot. So I moved them from a spot on a high shelf, near the ceiling in the plant room, to one of the artificially-illuminated shelves in the basement. At which point they went from looking more or less like this . . . 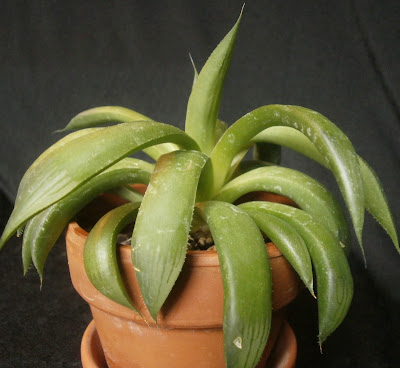 (which is not what Haworthias are supposed to look like: a better-grown plant would have shorter, more closely-packed leaves), to this: 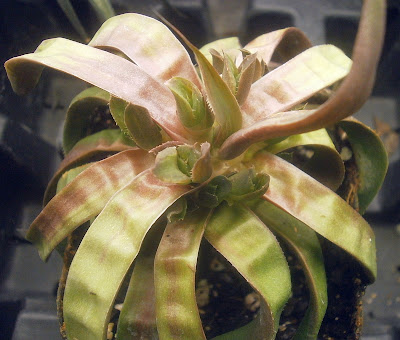 Which is even less what a Haworthia is supposed to look like.

I'm not particularly worried that this means the plants are all dying. It seems fairly clear to me that this is instead some kind of restructuring in response to the increased light. I am nonetheless kind of . . . I guess the word would be uneasy. It's bad enough to have had a plant for 8.5 years that has spent most of that time looking poorly grown (because it was) but more or less symmetrical; it's worse to have a plant that looks like a freakish adolescent monster, even if it's on its way to being well-grown.

This one's pretty much what it says in the title; I don't have a lot to say about it. 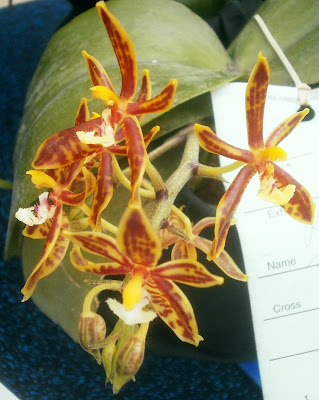 If you're looking for more than this, and how could you not be, check out these links:

It's been a couple weeks now since the first Coffea seedlings emerged from the vermiculite, which may be a good time to report on what's happened since then. 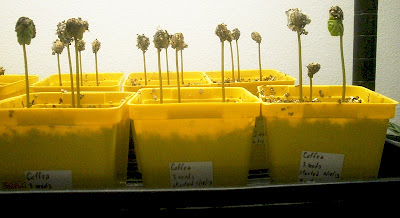 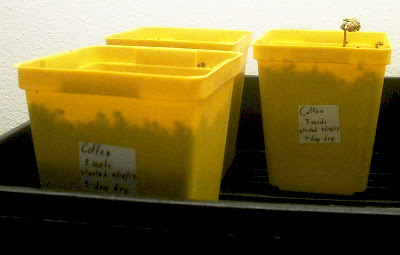 Obviously there's still time for the remaining eight seeds to sprout, but they only have a month left, and I'm not optimistic about them. So we've learned something. If you're going to sprout Coffea seeds from berries, here's a procedure that works:

1) Remove the seeds from ripe berries.
2) Soak the seeds in water for 24 hours.
3) Remove the seeds from water and let dry for eight weeks in a warm, dry spot with good air circulation and no sun.
4) At the end of the eight weeks, soak the seeds in water again for 24 hours.
5) Plant the seeds 1 1/2 inches (~4 cm) deep in damp but not sodden vermiculite, ideally in a pot that's taller than it is wide, and cover the pot to keep in moisture.1 Place under a light source, in a warm location,2 and wait; you should see the first sprouts in about a month.

But the specific occasion for the post is that there are now cotyledons3 visible: 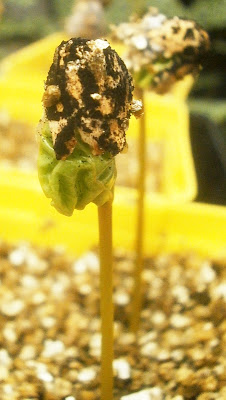 Also noteworthy: a lot of the seeds had some gray fuzzy fungus on them once they emerged from the vermiculite. This doesn't appear to have affected the seedlings or their germination any, however worried I was to see it initially.

It's possible that the black stuff on the seed coat, two pictures up, is another fungus, or is related somehow to the first fungus. All I can tell you at this point is that it's surprisingly fine and sooty.

The next Coffea update will probably be when they all get transplanted to soil; I have no idea when that will be, though. I'm not sure how long they can (or should) continue to grow in the vermiculite, and I don't want to try to transplant until I'm fairly sure they have root systems that can handle the shock. So we'll have to see how it goes, I guess.


1 Because I didn't want to have to worry about watering them, mine were actually completely enclosed: the black tray they're in has no holes in the bottom, and then they were covered with a tight-fitting clear plastic top. I'm not sure if this particular detail of my process should necessarily be imitated by others.
2 The basement's not really all that warm. Maybe 72-76F / 22-24C.
3 ("Seed leaves")
Posted by mr_subjunctive at 3:00 AM 9 comments