It's become clear that I'm not going to catch up on the Schlumbergera seedlings if I keep doing things the way I've been doing them. We're already five seedlings deep into the 2018-19 season,1 and twenty-eight of the seedlings from 2017-18 are still waiting on names. So for this post, I'm going to settle as many of that twenty-eight as I can, with less explanation than usual. 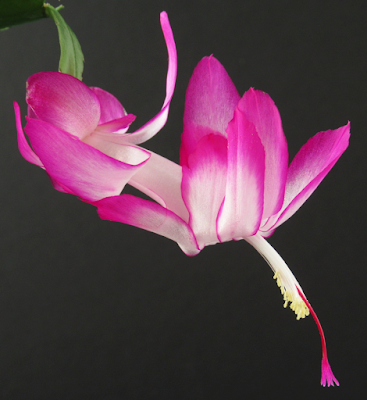 Explanation: Another one of the comedy-themed names I've given to the non-yellow offspring of the NOID yellow. 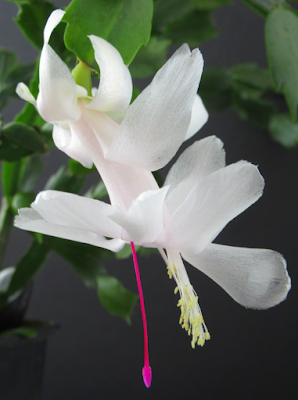 Explanation: The lower half of this photo made me think of parachutes: 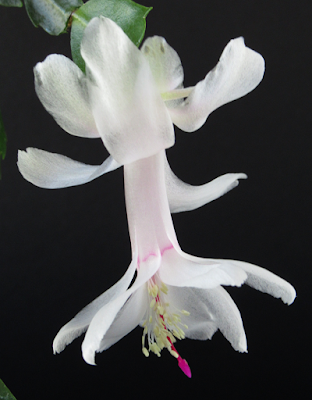 and I decided to run with it. It doesn't hurt that parachutes are often white. 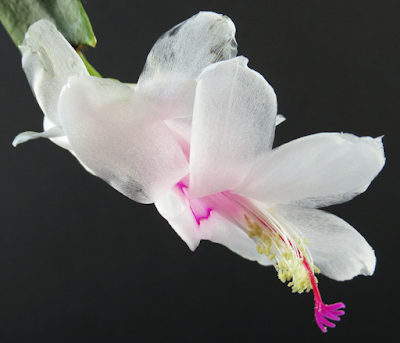 Comment: I am increasingly seeing "through the ringer" on-line because young people have no idea what wringer washers are and consequently have no basis for understanding the metaphor.3 Which makes me sad, because wringer washers are amazing and terrifying. The manual ones are even environmentally friendly, and a pretty solid arm workout. Maybe we should bring them back. 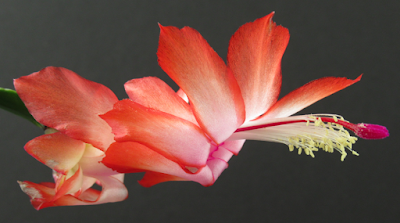 Explanation: Clip shows are episodes of TV that are mainly constructed from excerpts (clips) of previous episodes, usually with a few minutes of a framing story. As far as I can remember, they were always terrible, but they were cheap to write and film, so a lot of shows wound up doing them occasionally. Not so much of a thing lately; I think the natural habitat of the clip show is the 1980s. Anyway. The analogy here is, episode of TV constructed from previously-seen clips = Schlumbergera seedling that looks like it was constructed from previous Schlumbergera seedlings. 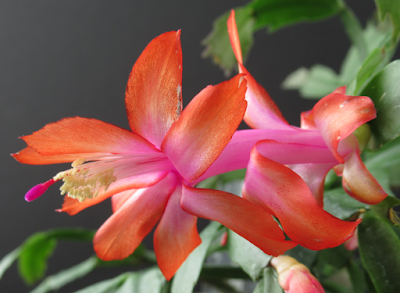 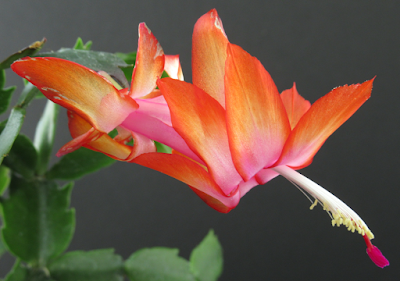 Explanation: CDs sometimes would have, say, the 12 songs of the regular album, followed by like eighty short tracks with no sound, and then another bonus song at the end of the album, as like track 99 or whatever. Often these weren't included in the list of the album's songs. So sometimes you'd put an album in the CD player and get busy knitting a blanket or whatever, and the CD would run out but you were busy so you didn't want to get up to put another one on, and there'd be a long period of silence, and then suddenly a new song would start playing and it would startle you so badly you'd jam a knitting needle through your forearm. Sometimes there would be more than one bonus song at the end, sometimes the bonus track would be unlistenable garbage, sometimes they were the best things on the album (cf. Beck, Midnite Vultures, "Debra").

In this particular case, I've had the orange/white Schlumbergera 019A Belevenissen around for forever, and it's fine, but hasn't really done anything remarkable since it first bloomed, and then suddenly it turns out to have an unexpected second seedling in the pot with it that is orange/pink. 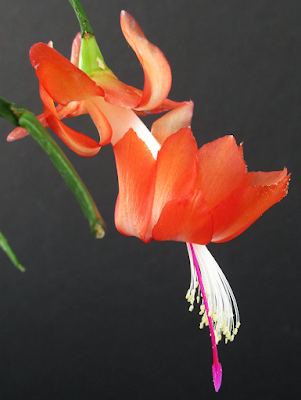 Explanation: The Buenaventura River doesn't exist, but appears on maps made during the first half of the 1800s (more or less). The gist as I understand it is that people wanted very much for there to be a river in the west that would connect the interior of North America to the Pacific Ocean, in the same way that the Mississippi connects most of the eastern part of North America to the Gulf of Mexico. There was some additional confusion about things like The Great Salt Lake, which has no outlets to the sea, but . . . people felt like it really ought to drain to the Pacific somehow. So they decided that a Mississippi-caliber river must exist, and gave it a name, and put it on maps, and the whole deal.4

The connection to the seedling is that I wanted so badly to believe that this was something other than just one more orange seedling from the NOID yellow that for a while I was able to convince myself that it was a bit yellower than the other orange ones. But it's not: it's just orange. 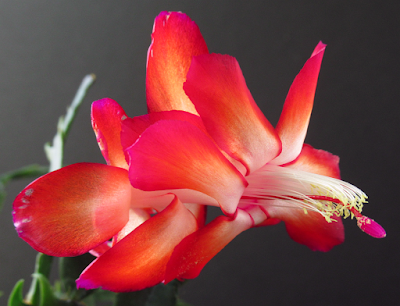 Explanation: This was the first of several seedlings to bloom after May 2018.5 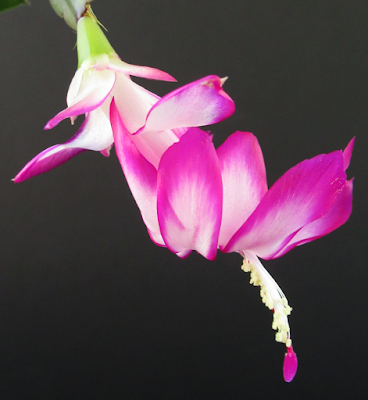 Explanation: Not only did this one bloom unusually late in the season (31 July), it was unusually old (~4 years) to be producing a first flower. 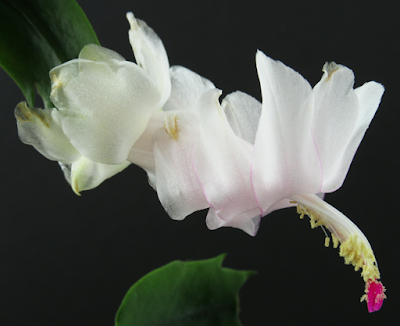 Explanation: Was suggested in comments some time back, though I can't find the comment again to credit the person who proposed it. I want to say it was Paul?

Comment: I initially wanted Spirit And Image, which the dialect dictionary says is the original version of "spitting image." Which made sense to me. If you say someone is the spitting image of another person, you mean that they're similar in temperament (spirit) and appearance (image), so I was pleased to have that explanation, since the saying has bothered me for a long time. However, when I attempted to confirm this on-line, I ran into things that said no, it probably actually was "spit" originally, and the meaning was that they share appearance (image) and physical composition (spit). Though you would sort of think that appearance and physical composition would often be basically the same thing. So I wound up more confused than I was originally. It's probably all just as well, since Spirit And Image would have made it harder for me to remember the seed parent: I would have assumed that 144A and its seed parent were both white/white, but in fact the seed parent is the NOID peach.

Let's do two more and then call it a post. 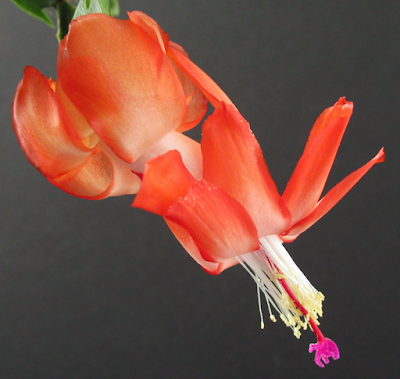 Explanation: Mostly this one's just a reference to a person from my life, though it was also a messier-than-average flower. The above photo doesn't show it so much, but it was sloppier a couple weeks later. 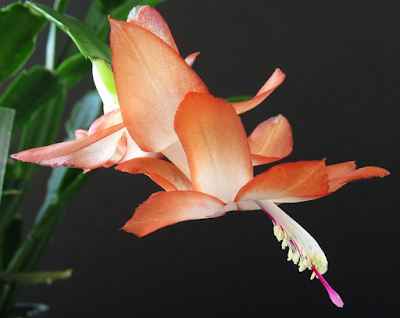 Explanation: A previously-considered personal reference; also the provincial motto of Quebec. Neither has much connection to this individual seedling, but I thought the name and color suited one another.

I mean, don't hold your breath, but the Schlummies just got a lot closer.


1 (383A, 384A, 423A, 437A, and 469A)
2 (From the dialect dictionary; 1930s term for a mixture of water and ice crystals. I'm not clear if this means water with ice crystals growing through it, or broken up ice and water, i.e., "slush." The book doesn't specify.)
3 Though what are they picturing, then, when they type "through the ringer?"
4 There was probably also confusion about the precise locations of existing rivers -- it's not as though you encounter a river once and then automatically know where it goes from there, and they didn't have satellite data to work from, so a bit of guessing and extrapolating was probably unavoidable. Also, I'd like to think that those using the maps probably understood that some of it was guesswork, though historical people are often very disappointing, so maybe not.
5 In the past, it's usually been safe to assume that by 31 May, I will have seen all the Schlumbergera flowers I'm going to see for that year. Though there have been exceptions before, especially in the basement: its seasons don't have much connection to the natural ones.
Posted by mr_subjunctive at 3:00 AM 0 comments