So I've gotten to the point where the camera and I are sort of getting along (except for the speck of something that's gotten into the lens, which I haven't done anything about yet because I don't want to send the camera away while there are Schlumbergera seedlings blooming for the first time, lest I miss the chance to document the flowers entirely). The adjustment process has been about 25% finding default settings to use and about 75% adjusting my expectations for what the photos "ought" to look like.

After sitting with the last post for a while, and encountering other reading material and etc., I've decided to change the name of seedling 1592 "Maliena B Itchcock," but the next several names on the list of possibilities are also problematic in various ways, and I'm beginning to think that maybe the whole drag-queen-name thing was ill-advised from the beginning. So I don't know what the new name is yet, or when I'll have time to make the changes.

Anita Waistline isn't a brilliant or unproblematic name either, but it's okay, much like the seedling it designates: 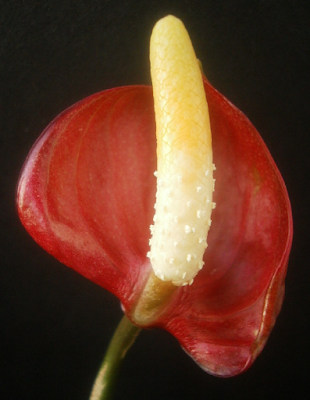 The spathe is small. I think the plant has only produced one bloom so far, too, which isn't exactly a recommendation. The foliage is probably the best thing about it. 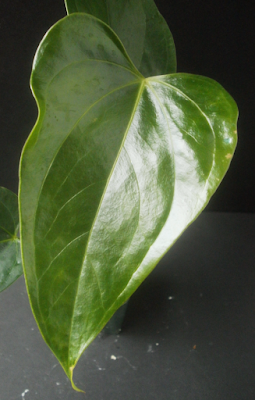 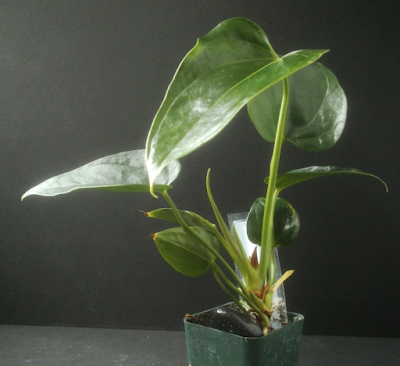 The seed parent was 0330 Faye Quinette; I was expecting much more interesting colors than this. But that's Anthurium-breeding for you.

Anita is a sibling of both 1592 (whatever her name's going to be) and the also-uncomfortably-named 1594 Roxy-Cotten Candy.

Let's see. What else?

The Leuchtenbergia principis seedlings (mentioned about a month ago) did in fact germinate, or at least a lot of them did: 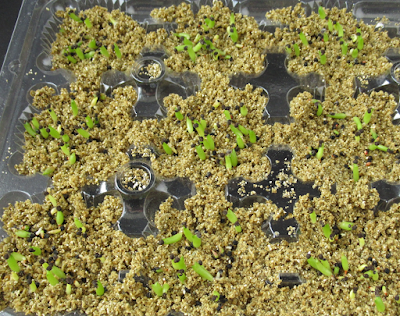 When these photos were taken, the seedlings were a mere 15 days old. 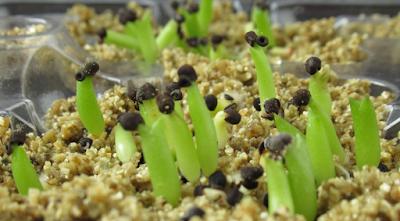 Also have some news about the weird yellowing-veins thing that "the Erlenes" do with their leaves, which doesn't answer the question of why they're doing it. but does provide more evidence.

I'll try to get that into the next post, whenever that is. Life is actually pretty acutely stressful right now and I'm having a rough time of things, so I'm not going to make any promises. But I haven't forgotten about the blog.