Yvette has surprised me this winter / spring. She'd bloomed once before, a year ago, and while that bloom was nice enough -- 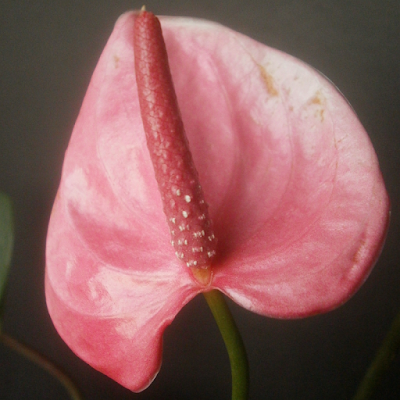 -- it was still only a pink / pink, and didn't stand out from the other pink / pinks, so I didn't spend a lot of time thinking about it. It tried to produce a second bud as the first bloom was dying, but that bud fell victim to The Great Droppening, when lots of plants threw buds at the same time, likely to protest being sprayed with white oil.1, 2

But then this February, a new bud started to form, and I got interested in it when I noticed how large it was getting. Not long before the spathe started to open, an odd kink toward the bottom of the bud indicated that something was not quite right, 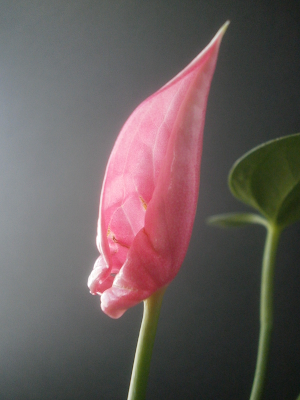 and then the bud actually did open, and it was an intense highlighter pink, as well as being bigger than most of the other seedlings' blooms, but that one corner really was screwed up so the whole thing was sort of a letdown anyway. 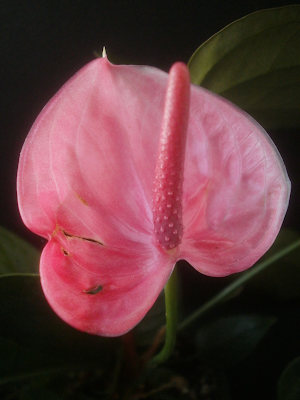 Worse, I don't know what caused it to do this in the first place. The kink appeared fairly early in the bud's development, so I'm inclined to blame drought stress, which is what I always blame for Anthurium problems I don't understand,3 but this is the first bloom I can recall getting holes in the middle of the spathe, and I know plenty of the other seedlings have been drought-stressed before, so that's clearly not the whole explanation.

Sort of waiting to see what happens with the next bud on Yvette, then. A new bud has just started developing, so by June or so, I should know whether this is something they're all going to do, or something peculiar about that particular moment.

It's worth noting, while I'm talking about Yvette, that she also has very nice leaves -- 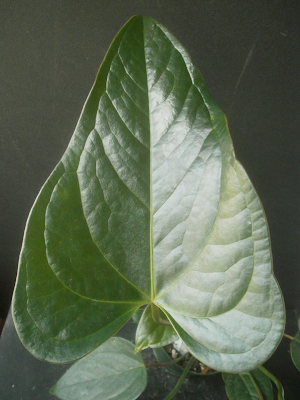 -- dark green, more or less flat, unblemished, interestingly veined, and so forth. And the spathe color is fading with time a lot less than many of the other pink / pink seedlings' spathes do.4 So there's definitely potential here, if future spathes can do a better job of holding themselves together.


1 White oil: mix of water, vegetable oil (soybean in my particular case) and an emulsifier (dishwashing liquid), which is sprayed on plants with bug problems in an effort to suffocate the bugs by blocking their breathing pores with oil. In fairness, this really did make a big impact on my thrips problem here, for several months, but it did not actually eradicate them. Also, being an unsaturated oil, it goes rancid when exposed to air, which turns out to be a problem, and a few plants react very badly to being sprayed with oils of any kind, the worst in my experience being Cordyline fruticosa, Euphorbia milii, and Breynia disticha. Ask your horticultural professional if white oil is right for you.
2 Though the cause / effect relationship is only speculation, until / unless I try spraying everything with white oil again. Which I'm hesitant to do. See above re: rancidity and not eradicating things.
3 (and you'd be surprised how often that turns out to be the correct answer)
4 Both 0241 "Megan Gigaterra" and 0126 "Erin Dirtylondry" get much lighter as they age. This looks better on Erin than on Megan even though they both lighten to about the same color; I haven't been able to put a finger on why that is. Curiously, Yvette's first bloom got very light within a couple months, so it's possible that there's a seasonal or cultural factor to work out too.
Posted by mr_subjunctive at 3:00 AM 0 comments

It'd be hard to get excited about the color pattern here -- faint stripes seem to be pretty common for Masdevallia hybrids -- but the color itself is something I don't think I've seen before. The closest we get is probably Masdevallia Tortoise 'Plum Petite,' from the 2012 show, and this is a lot more saturated than that. 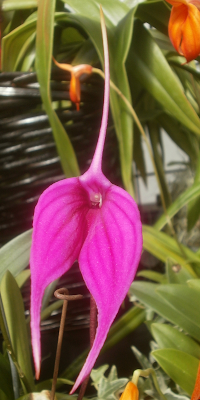 The Quad Cities orchid show was last Saturday, and it was, you know, fine. Like an orchid show. I got about 60 sets of pictures, I think, depending on how salvageable a few bad shots turn out to be, so we'll have about one orchid post per week for the rest of 2015, roughly the same frequency as the 2014 posts. Spelling and IDs were more consistent and more often correct than previous years too, so good for the Illowa Orchid Society.

Not a lot of surprises, though there were a few new weird species, which I enjoyed even if they weren't very flashy. Sadly, I only saw one Masdevallia in 2015, and it wasn't even a pretty one. You won't see many Phragmipediums this year either. (They were at the show; I just didn't take pictures of them. Most were the ringleted types, with the long skinny petals that fall down to either side of the bloom, and those rarely photograph well, so I figured this year I just wouldn't even try.)

The fashion story this year seemed to be Black Is The New Black -- seemed like an unusually large number of very dark blooms, including a couple really dark purple Phalaenopsis, a dark purple Vanda, and a few Paphiopedilums that were basically black in places. So we have that to look forward to, beginning in April.

You may remember Charlotte from last spring, when she grew a bud and then dropped it after working on it for three months. At the beginning of February 2015, I noticed a new bud, and that one developed a lot faster, opening its spathe about a month later. 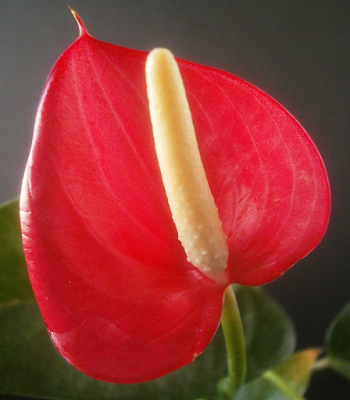 There's not a lot to say about this; we've seen red / yellow blooms before. I like it fine, but mostly I think that's because I'm happy it's not a pink / pink. Even if it isn't exactly breaking new ground in Anthurium bloom color, it's pretty large, and seems to be holding its own against the thrips pretty well, which is enough to make me happy. 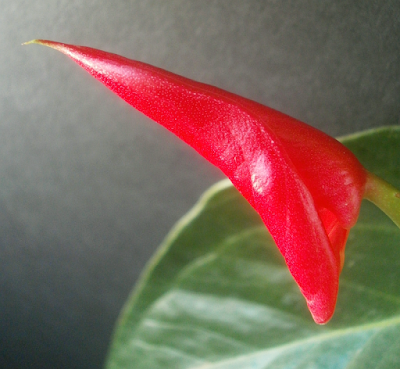 The leaves are pretty much the same story: not groundbreaking, better than the default, good enough. 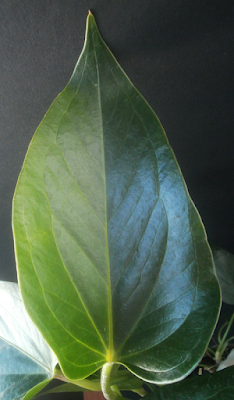