This is sort of two random plant events in one, actually. The first is that the Cyperus alternifolius plants in our east window started to bloom about a year ago. 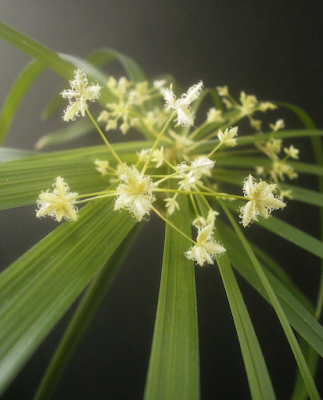 I mean, that photo is from January, but I assume it had been going on for a while before I got around to taking the picture. In any case, I was surprised that the plants would do this indoors, and even though the flowers aren't particularly beautiful, it was interesting.

I was less happy about it by the summer, because the flowers were kind of messy, dropping a fine dust all over the place that might have been pollen and might have been dead bits of the flowers; I couldn't actually figure out what it was from looking at it. Mainly I was just irritated with the dust, because I was having a bit of a ghost mite problem on some of the nearby plants, and the dust made it hard to see whether I had ghost mites or not.

I'd gone in with the paintbrush and kind of randomly brushed flowers around a couple times, just to see what would happen. Nothing changed in any kind of obvious way, so I concluded that my technique or timing or something had been wrong.1 Then at some point this fall, I discovered scale on the Cyperus and dealt with it by cutting down all the leaves. I'd wanted to see what the plants were going to do in the end with the flowers, but stopping a scale infestation is more important.

But then in early November, I noticed these: 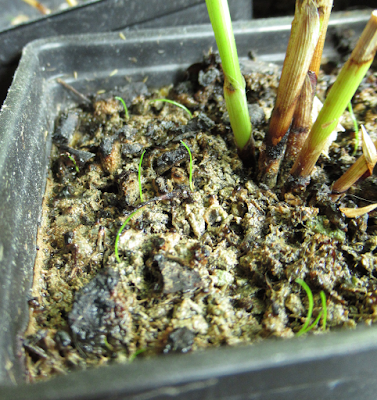 So it would appear that at least some of the dust the plants were throwing everywhere was probably made of teeny-tiny seeds. And now we know it can be done.

As far as I can tell, the scale problem is over. At worst, it's been much reduced.

Meanwhile: some of the new camera's photos have already been added to the Schlumbergera gallery post, if anyone cares. 208A Raspberry Possum's new photo is worth checking out, in particular.


1 (And in any case Cyperus is so easy to propagate from cuttings that it seemed kinda silly to worry about growing them from seed. It's always interesting to see if that sort of thing is possible, but worthwhile is another matter.)
Posted by mr_subjunctive at 3:00 AM 4 comments