Not feeling well on Thursday. Here are two pictures of a plant that is probably Callisia gentlei. 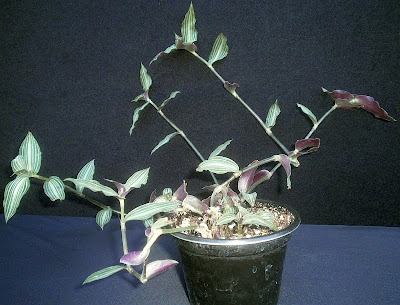 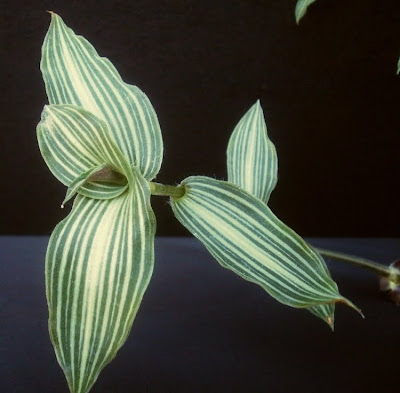 Labels: Callisia, everything is crap, other

The tag on this one said, "Cochlioda 'Louis Posey' now ONC." I don't know what that means, exactly: my first thought was that they were saying that Cochlioda has been renamed Oncidium, but that appears to be one of the few things in the orchid world that isn't changing at the moment. As far as I could determine, Cochlioda is still a legitimate genus. So . . . no idea what the intent of the tagger was here, but at least they gave us a tag, and the ID appears to be correct, so there's that.

Cochlioda. Louis Posey is a hybrid of Cda. noezliana and Cda. sanguinea.

The usual disclaimers apply, but let's run through them again just to make sure we're all on the same page:

2) Also, many of the plants on the list are available in multiple cultivars, not all of which necessarily bloom red.

3) I'm approaching these lists from an interior-decorating standpoint, not a botanical one. If the plant has showy red bracts with tiny yellow true flowers, I'm counting it as a red-bloomer, because that's how most people would think of it.

4) As there are no sharp dividing lines between "red," "orange," "pink," and "purple," you may disagree with me about the redness of some of the flowers mentioned here. Which if it's all the same to you, I'm going to see that as more your problem than it is mine.

5) In some cases, I'm going wholly or partly by the results from Google image search for the plants in question. Since people sometimes post misidentified pictures, there is a small chance that some of the plants listed, especially more obscure plants, may be included in error. 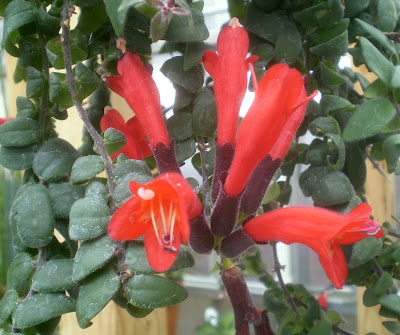 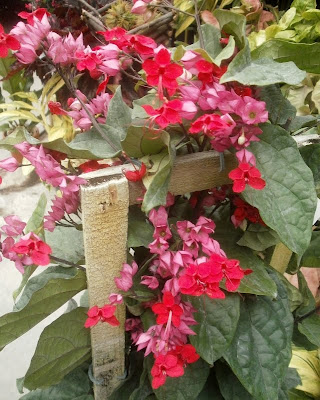 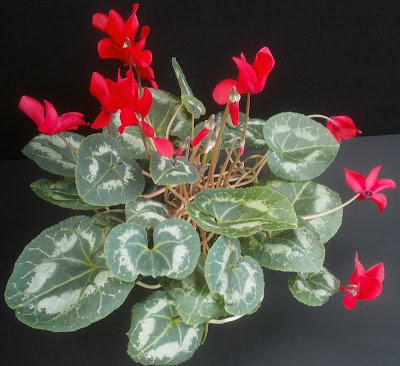 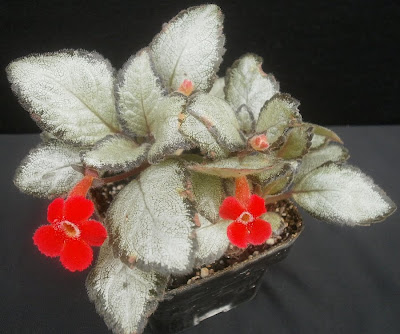 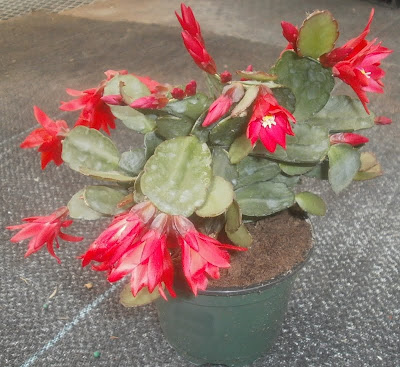 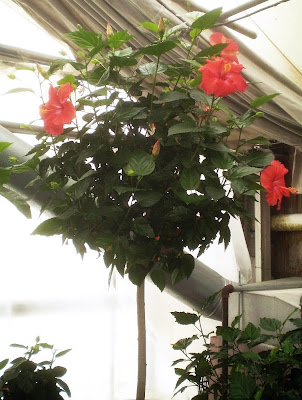 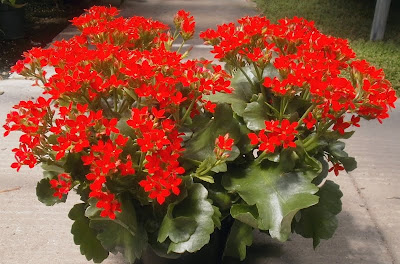 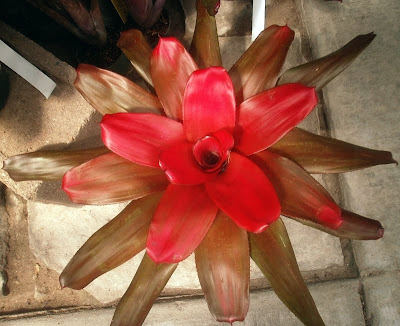 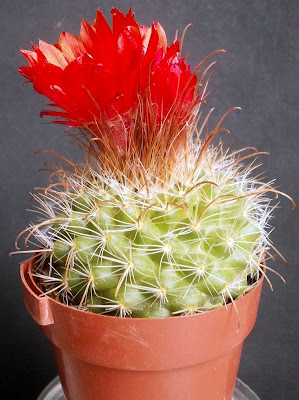 Parodia microsperma. Some other Parodias have red flowers as well, though yellow is more typical. Tillandsia ionantha. Some other Tillandsias have either red flowers (T. funckiana, T. latifolia) or red bracts (T. juncea, T. abdita, T. vinalesensis, T. boliviensis, T. tenuifolia, T. brachycaulos, T. queroensis, T. leonamiana).
This is a tough list to do recommends / anti-recommends for: for all of these, I either have 1) no experience, 2) exclusively bad experiences, or 3) very mixed experiences. If forced to come up with something, though, I would reluctantly recommend Aeschynanthus, Episcia, and Neoregelia.

My personal experience with Aeschynanthus lobbianus was mostly negative, but I don't think it was the plant's fault: I should have kept up better with the watering. Other Aeschynanthus species have done well for me, enough so that I'd feel comfortable recommending them to other people. The main obstacles to cultivation are light (they need at least bright indirect light, and I'd highly recommend at least some direct sun) and temperature (always above 60F/16C).

I enjoy Episcias, but varieties either tend to do really well for me ('Coco,' 'Suomi,' several NOIDs, 'Faded Jade,' 'Raspberry Parade') or really poorly ('Pink Acajou,' 'Kempenfest,' 'Burning Embers'), without much of a middle ground. 'Silver Skies' is one of the good ones, though it's a bit slower than the others, and stays smaller. Main obstacles to cultivation: temperature (always at least 60F/16C), water (don't let them dry out to the point of wilting) and humidity (higher is better).

I was a huge fan of Neoregelia at one point a few years back; I've cooled off on them somewhat since then, for various reasons, but they're perfectly fine plants if you have the space for them and don't mind getting caught on their sharp marginal spines occasionally. Biggest obstacle: light (at least bright indirect, with some direct sun strongly recommended).

For the anti-recommend, I guess I'll go with Hibiscus, though Cyclamen and Kalanchoe were really close. They all can be grown indoors successfully, but none are particularly well-suited to it. Cyclamen goes in and out of dormancy at erratic intervals and is easily overwatered as a result; Kalanchoe virtually always goes downhill once purchased, because it needs extremely bright light.

Hibiscus has both problems: it defoliates in the winter, to a greater or lesser degree depending on how it's treated, and it's very difficult to rebloom in the house if you don't have a lot of light. (Though it's easier than Kalanchoe.) Hibiscus has one problem that the other two don't, though, which is that they're incredibly appealing to pests. At work, we were always wrestling with spider mites, whitefly, and aphids; I've also had spider mites on plants at home. Hibiscus are gorgeous, obviously, but it's just not worth the hassle to bring them inside for the winter. People with huge windows or small plant collections might find Hibiscus more rewarding than I do.


As usual, I am totally open to it if readers want to make additional suggestions in the comments.


1 The annulus is the raised ring around the center of some stapeliad flowers. One is sort of visible in the first picture on this post.
Posted by mr_subjunctive at 3:00 AM 8 comments 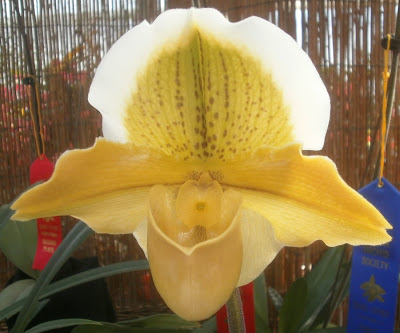 I don't really like anything about this one, though it's possible that the photography is mostly responsible. The top petal is a little too broad, or round, or something (who decided that roundedness is a quality we want in orchids anyway?), and it's also my opinion that mustard is the only thing that should ever be mustard yellow.

Perhaps this one was left untagged was because it was too ashamed to identify itself.