Didn't mean to just stop posting like that, but I've been busy, and the plants aren't doing anything especially noteworthy anyway. There have been new Anthurium blooms, and lots of new Anthurium buds which will eventually become blooms, but they've all fallen into the same red/yellow, red/white, and pink/pink categories I've shown you several times before, and it's hard to feel any urgency about making a blog post to show them off. I have a few ideas for longer posts still, but never seem to find any time to work on them, so . . . probably not going to be posting a lot in the near future either.

But we'll always have the orchid-show orchids. This particular one photographed badly -- for every shot I took, the camera made a different guess about where to focus, all of them wrong -- and it might not have been that interesting even if it had photographed better. Epidendrums seem to concentrate more on quantity of flowers, rather than quality. But the colors at least coordinate well with the color scheme on the blog at the moment, and the photo looks a little better at full-size. (Which possibly means that I should have cropped it differently.) 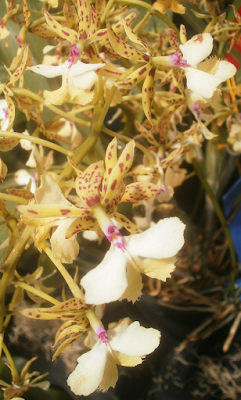