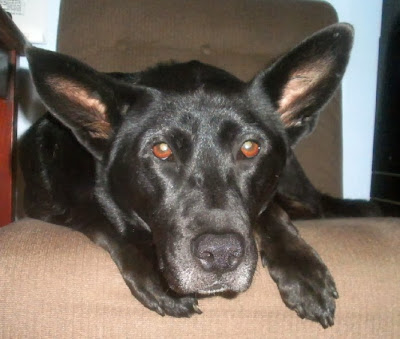 No big Sheba news. No little Sheba news either, as far as that goes.

Unrelated: I noticed yesterday morning when I was out with Sheba that we had a volunteer Petunia in one of the beds (the one that never got weeded or watered and was full of whiteflies for the last month and a half of the summer because I am a bad outdoor gardener and because whiteflies like Cannas). 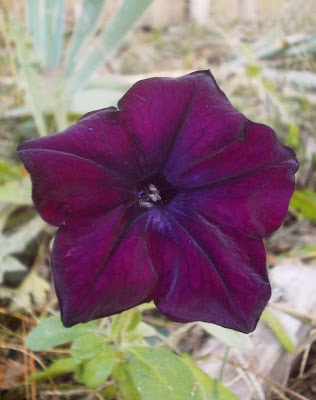 I like Petunias quite a bit, but we've never actually grown any here, or even attempted to, so this was a happy surprise. (Also a happy surprise: it color-coordinates with the blog.) We had a tiny peach poppy appear out of nowhere in early August, as well. 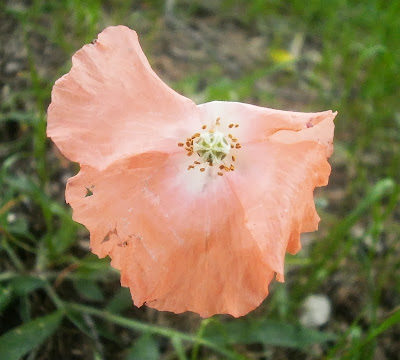 We might be able to explain the Papaver, as there's a chance it might have been in an old packet of "wildflower seeds" that we threw around the lawn just to see what would happen, but the Petunia is a mystery. Maybe seeds got blown through the fence from the neighbors' garden? 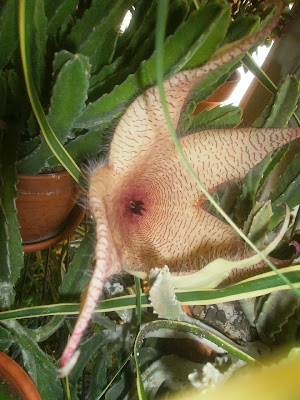 Everybody else has been posting Stapelia pictures for the last month or so, but my plants have lagged behind for some reason: everybody else was posting flowers when I was just beginning to see buds.

So far, two flowers have opened, and there are another four or five left to go. As to the smell: I can't detect any just standing in the room with them. I can if I get right up next to them and inhale, though. Experiments to determine the minimum number of Stapelia gigantea flowers it takes to be unpleasant in a plant-room-sized room are ongoing; I'll keep you informed about the results.

2. Strelitzia juncea
I've finally obtained some Strelitzia juncea seeds, after a long period of wanting some but not finding any. I began with five seeds, which I planted on 19 September, and I noticed the first sprout on 18 October, which I guess is fairly rapid progress. I'd been warned that they were irregular germinators, and could take a few months to do anything, so I guess this is encouraging. 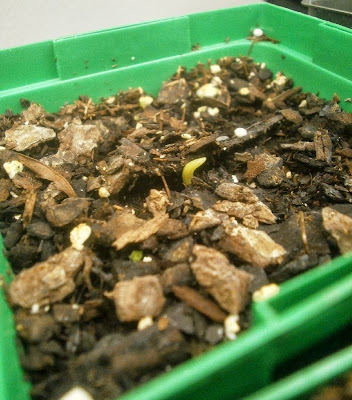 I'm not even sure why I wanted them in the first place; the existing Strelitzias here (2 S. nicolai, 2 S. reginae) are big and awkward to deal with, and it's not clear that S. juncea can even be grown indoors in the first place. But I'm still going to try.

3. Anthuriums, assorted
The Anthurium "hookeri" spadix is not showing any sign of having self-pollinated. Which is more or less what I was expecting to happen. Or expecting to not happen, I guess. It's still attached to the plant, though, and sometimes they take a while to show any obvious changes, so I haven't entirely given up hope yet.

Peaches' spathe is, so far, the same pink-red as "Bijoux Tuit" and most of the others, and is consequently not that interesting enough to warrant a photo, but the plant as a whole looks good even if the flower's nothing special.

Zach is possibly going to be the most interesting seedling yet; his spathe is a pale peach-pink with a red margin right now. It's actually kind of unsettlingly close to my skin tone (below and to the left of the spathe), now that I look at the picture.
The color may change -- not only is it normal for developing spathes to get darker in color as they mature, but I'm not sure Zach's going to make it to full bloom. Some of the Anthurium seedlings do a practice inflorescence and then drop it before they make a real one in a different color,2 and there are some indications that Zach might be inclined that way. (Both "Dave Trading" and "Bob Humbug" did this too; maybe it's a guy thing.) In any case, I'm potentially excited about having some variety in color.

"Sal Monella" is both in the process of unrolling the spathe from its first inflorescence and in the process of producing a second bloom. If the second bloom is successful, then Sal would be the first of the seedlings to bloom twice, which makes him potentially valuable for breeding. Also nice: the spathe has remained a solid red red, not the pinkish-red of most of the others. It's not hugely different from the other five that had bloomed previously, but it's different enough to notice and be happy about. 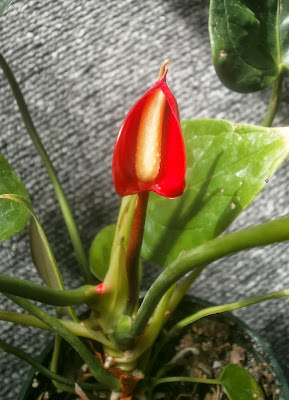 (New inflorescence is just starting to be visible, below and slightly to the left of the one that's opening now.)
EDIT: I finished this post Wednesday morning, then found another two flowers in progress on Wednesday afternoon: #58 ("Betty Larsony") and #245 ("Sawyer Ad"). Sawyer's spathe looks more or less in line with Gemini and most of the other seedlings; Betty might be a little lighter in color but it's hard to tell for sure. In Betty's case, I believe she's trying to apologize. So that makes ten.

And no, I'm not going to blog about it every. Single. Time. one of the Anthurium seedlings produces a flower from now until the end of eternity. But I'm excited. Bear with me. 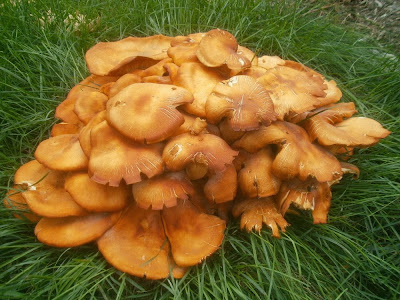 I happened on this group a while back and found the size of the clump impressive enough to photograph. I couldn't make an ID on the species, even with the pictures to go from and my copy of The Pocket Guide to Wild Mushrooms; my best guess is something in the Hypholoma genus but I emphasize that it's a guess.

The closest match in the book was H. capnoides, but the pictures of H. capnoides that come up in Google don't look much like my pictures or those in the book. And considering that the book is explicitly about edible mushrooms, and not all mushrooms are edible, there's every chance it shouldn't contain a photo of this particular mushroom in the first place. So I probably shouldn't even be guessing at an ID in public. 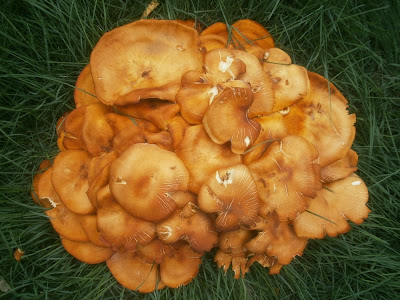 Mushrooms remain neat, though, even if they aren't plants.

Finally, an oddity at the supermarket: Jackfruit. 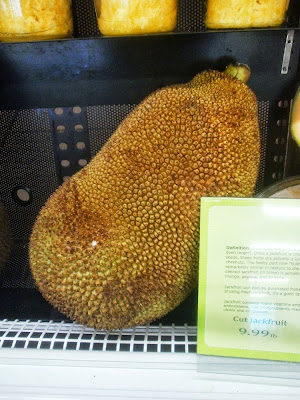 One could buy it by weight ($10/lb, which translates to $4.50/kg) or pay $30 (reduced from $35!) and get the entire fruit. (Which suggests that the whole thing was maybe only 4 lb / 1.8 kg to begin with. It sure looked a lot heavier than that, though, so I may be making some bad assumptions.) At those prices, for a fruit I couldn't have even guessed how to begin eating, I wasn't particularly tempted, though the informational sign next to it mentioned seeds, and that got my attention briefly.


1 Yes, I am aware that lottery numbers usually don't go that high, and don't usually have you pick eight numbers. But I'm not seriously suggesting that you play the lottery, so it all works out.
2 It's not really practice. But that's what it looks like. (If you object to plant anthropomorphization, what are you even doing here in the first place?)
Posted by mr_subjunctive at 3:00 AM 7 comments

It kind of bugs me when people name non-red things "cherry" something. Not bothered a lot, but it does seem sort of exceptionally wrong.

I can't tell whether these pictures turned out well; I'm still getting used to having an LCD monitor. From some angles they look washed-out, and from other angles they don't. In either case, they do an admirable job of matching the blog's current color scheme, so there's that. 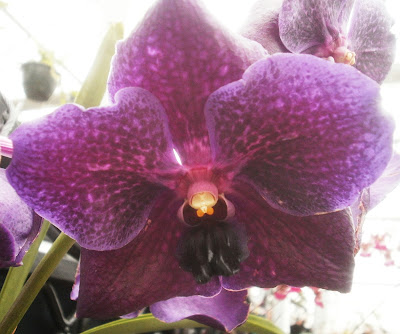 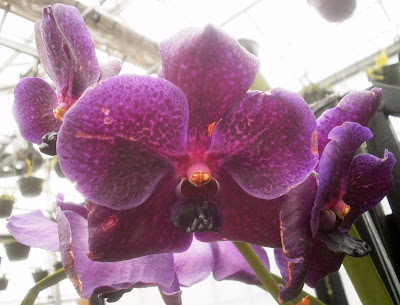