At this rate, I'm never going to get all the Schlumbergera seedlings named. I'm not even making progress -- number 183 has produced a first bloom since I wrote the last post.

On the up side, I think I can go ahead and tell you all what the secret project was: I wrote a piece for the 2019 Old Farmer's Almanac Garden Guide. I have not yet been able to find a print copy to look at (despite having looked at almost every store in the area I can think of that might have physical magazines1), and OFA is currently still selling the 2018 Garden Guide on their website, so I'm thinking maybe it hasn't been officially published yet? I mean, they do have one for 2018 already, and this is 2018, so maybe the 2019 one gets printed in the winter? I don't know; they never actually told me, and I didn't think to ask. (Or they did tell me and then I forgot. Either way.)

In any case, I'll be keeping my eyes open for it, and I'll let you know if I see it available somewhere. The article in question is a quick run-through of how I wound up with so many plants, and what that's like. You probably have some sense of that if you've been reading the blog, but I think there's some stuff in there that I haven't mentioned here previously.

But let's get a seedling named.

256 is the second seedling from Schlumbergera x buckleyi to bloom, the first being 271A Not Here To Make Friends.2 Out of 26 buckleyi seedlings so far, only three have bloomed (the third, 272A, is coming up in the next post), which suggests that the offspring tend to inherit buckleyi's fussiness about setting buds.3

I've had trouble assessing the quality on 256's blooms. I think there have only been two or three in the first place, and the flowers all go through spells of being more photogenic 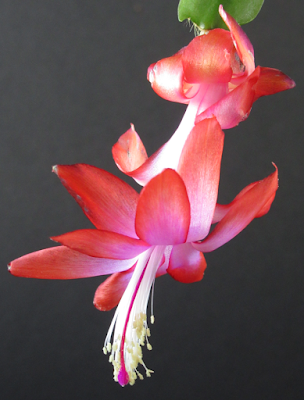 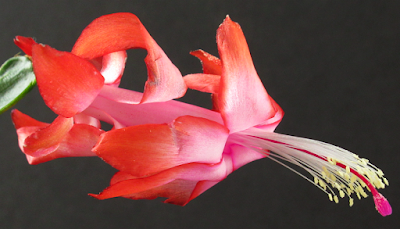 Either way, we've seen worse, but the goal is a flower that's going to look decent all the time, so I'm having trouble deciding how I feel about this one.

Our name candidates: All Of A Floption, Loblolly, Meteoric, Yes And No.

All Of A Floption and Loblolly are both taken from the dialect dictionary I explained in the post for 095B Pele's Lipstick. All Of A Floption means "caught unawares," and dates from (at least) eastern Canada (New Brunswick, Nova Scotia, Newfoundland) in 1895. Which the flower certainly seems to have been surprised to be photographed, some of the time, so that kind of works.

Loblolly gets two entries, once as a noun ("Gruel; food, variously defined" and "Mud, ooze, mudpuddle, mess") and once as an adjective ("Careless, slouchy; -- used of one's gait & dress"). The name is intended to refer to the latter.

Both forms appear to have been pretty widespread in the U.S. in the early 20th century, though the "thick gruel" / "muddy mess" use appears to have started much earlier and persisted much later. The book cites a use from the West Indies in 1657 for the "a kind of food" definition, and The Free Dictionary suggests an origin in the 16th century, probably as nautical slang for a thick gruel. The careless/slouchy meaning appears to have disappeared since the 1940s.

"Loblolly" has become part of the common name for a few species of tree, in particular Pinus taeda, the loblolly pine. Which is neither slouchy-looking nor gruely; apparently the name comes instead from the swampy, muddy lowlands in which it tends to grow. 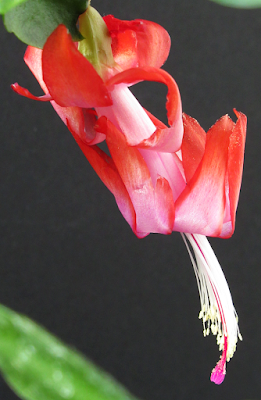 Meteoric is just a reference to the extremely reflexed petals the flowers have in some of their pictures, which evokes meteors,4 but also refers to how rapidly the flower changes from bud, to ugly, to pretty, to dead.

Yes And No is kind of an unexpected option, but does kind of summarize the difficulty in naming the seedling. (Is it pretty? Well . . . yes and no.) 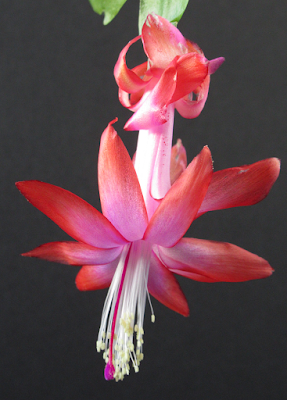 First I'll drop Loblolly, since the intended meaning of "careless and slouchy" doesn't seem to have ever been as common as the dialect dictionary makes it sound, and there's nothing particularly porridge-like about the flower.

I don't necessarily mind All Of A Floption, but it doesn't work as well as the other choices for me, for reasons I can't really articulate. I'd probably like it better if Floption could be used by itself, but 1) that doesn't appear to be the way it was ever used originally, and 2) searching the word by itself, at the moment, brings up a lot of pages related to health insurance in Florida, and an icky page at Urban Dictionary which you can look up for yourself if you want.5 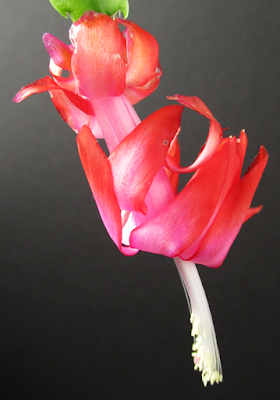 Which leaves us with the concrete Meteoric and the abstract Yes And No. Under normal circumstances, I would go with the former, but Yes And No summarizes my feelings about the seedling a lot better: it kind of feels too perfect to pass up. So this one will officially be 256A Yes And No.


1 Except Barnes & Noble, because fuck Barnes & Noble.
2 271A Not Here To Make Friends had a great year in 2017-18, by the way. There had to have been at least ten completed blooms, and it's not a large plant. And they mostly looked pretty good, even. If I wind up having time to do the Schlummies for 2017-18, it's got a really good chance of winning Most Improved Returning Seedling (2016-17 Season).
3 Though of the ones in the plant room, close to 50% have bloomed (three of seven), so it could be that buckleyi seedlings aren't hugely particular, just particular enough that they don't want to bloom under lights in a warm basement.
4 (Well to me it evokes meteors.)
5 It's not clear, from the Urban Dictionary page, whether this is actually a term anybody actually uses. There are no competing definitions (usually several people will have attempted to provide Urban Dictionary with definitions, if it's something that people actually say), and as I write this it has one thumbs-down and no thumbs-ups.
So it looks to me like someone is trying to make "floption" happen. (Gretchen, stop trying to make floption happen! It's not going to happen!)
Posted by mr_subjunctive at 3:00 AM 1 comments