095B is the first good seedling of the year. It's not doing anything new, and it didn't do enough (only got one bloom), but it's a less common color than 018B Fifth-Year Senior, and it photographed better than 069B I Think She Likes Me, so "good" feels justified. 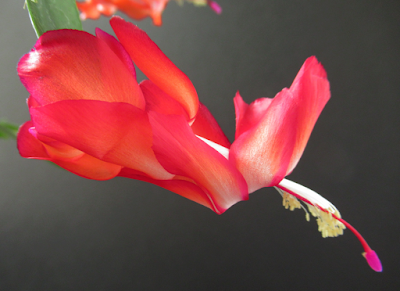 It's also going to be a problem to name, because I like three out of the four choices very much and will be sad to give up two of them. They are:

Come To Fetch Fire will need some explaining. Many years ago, I was at a public library that was selling off some of their old books, and I found a book that had compiled descriptions of local dialect from the U.S. and Canada.2 An awful lot of the book is devoted to alternate pronunciations, which aren't useful for our purposes, but it also includes some local expressions and slang, mostly from the 1930s, which very much are. So you're going to see a lot of American Dialect Dictionary stuff this year. Come To Fetch Fire is, according to the book, a Southern U.S. idiom for "to come & leave at once."3

Pele's Lipstick was proposed by reader Paul in the comments for seedling 217A Blood Frenzy, and then I considered it for 094A Some Clowns, but I was unsure about 094A's quality, so I decided to save the name for a more solid seedling.4 Is this one that seedling? We'll find out soon enough.

And then We're All Still Here, which has personal significance to me, but I'm not going to explain it.

First one to go is We're All Still Here, mostly because the other three are all a lot more visual. And we can lose Carrie Fisher (for now; she'll come back) on the grounds that the other names kind of have to be in the red or orange neighborhood, but a "Carrie Fisher" could be any color, and might actually make more sense as a white seedling, given that she wore white for one of her more famous roles.5

So, Come To Fetch Fire or Pele's Lipstick?

Well. Come To Fetch Fire does make more sense for a fiery-colored seedling that's only bloomed once. And the fact that it's only bloomed once also means that the overall quality of the seedling is difficult to gauge. If I didn't want to name 094A Pele's Lipstick because I wasn't sure if it was a good seedling or not, then maybe I should hold off on it for this seedling as well.

On the other hand, even if it's only bloomed one time so far, this seedling is really likely to produce another bloom at some point, at which time Come To Fetch Fire will make less sense. And the first bloom wasn't notably short-lived or anything. I've been hanging on to the name Pele's Lipstick for a couple years now, I like it better, it's slightly shorter to type, and it's even more visual, so I think this one is 095B Pele's Lipstick even despite the reasons why Come To Fetch Fire makes more sense. They're my seedlings, and I can be as arbitrary about their names as I want. So there.


1 It doesn't look good for Mary, though. I haven't officially thrown 042A out yet, but we're at the point where I probably ought to. In which case I should recycle the name, because she's the patron saint of the blog and everything.
2 (Harold Wentworth. American Dialect Dictionary. Cambridge, MA: The Riverside Press, 1944.)
3 It's also possible that it's a widespread contemporary phrase that I've somehow missed hearing; one of the surprising things about reading the book cover to cover is that some of these local words and idioms took off and became part of everyday American speech. So if you're reading the whole book, you're constantly bouncing back and forth between why is that in here? That's not local dialect; everybody says that to oh my god, this is like slang from another planet, that's so cool.
The point being that although I was unfamiliar with some of the terms, they might be perfectly ordinary, everyday language to you.
The dictionary usually doesn't explain the origin of the term; the mental image I formed for "come to fetch fire" is of someone whose fire at home has gone out, so they go to get a burning coal from someone else, and can't stay at the other person's place or else the ember will die. This may or may not have anything to do with the actual origin.
4 An instinct which turned out to be correct: Some Clowns hasn't been doing well this year either. A big chunk of the plant shriveled and dropped off a couple months ago. Though at least it hasn't all died.
5 And oh my goodness are we going to have some white seedlings to name, later on. So many white seedlings. Never ever cross a white Schlumbergera with anything, unless you're looking to breed the perfect white Schlumbergera.
Posted by mr_subjunctive at 3:00 AM