For some reason, I have this one marked as the third of my four favorite orchids from this year's show.1 I still like it, and I guess the photos came out well enough, but I don't think I'd rate it quite as highly if I were doing the top 4 list over again. I like the colors a lot; not sure how I feel about the shape. 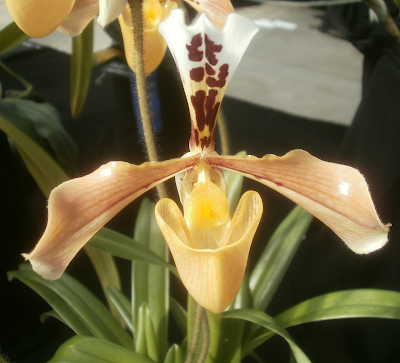 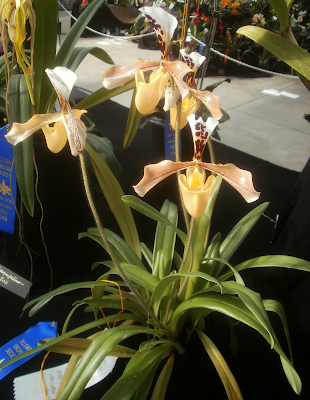 Paphiopedilum gratrixianum is found "from Laos to Vietnam," according to Wikipedia. 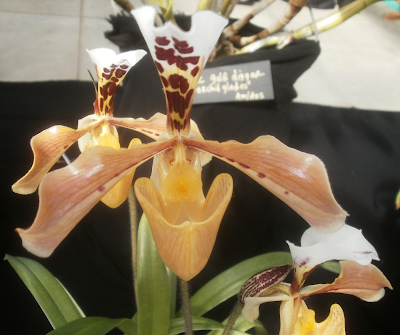 
1 The first was Laeliocattleya Natrisiri, or whatever it's called, which was posted in August, and the second was Cattlianthe Mary Elizabeth Bohn, which we saw in September. You'll have to wait until March 2 to see the fourth one.)
Posted by mr_subjunctive at 3:00 AM 0 comments

As promised, here is the first bloom from Anthurium seedling 040 ("Ivy Winters"): 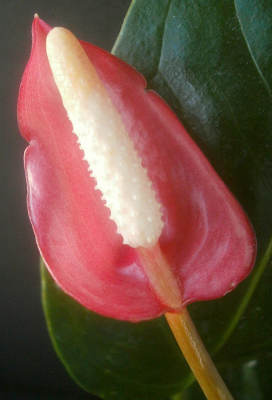 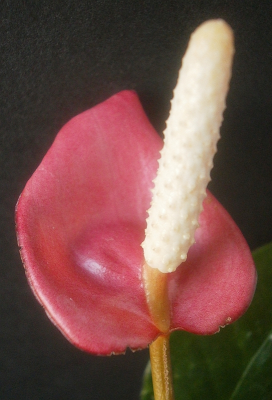 (on December 17)
It's not amazing, I know, but it actually is slightly special, in that usually the pink-blooming plants have matching spathes and spadices, and this one doesn't. Which is something. I'm a little surprised that it's pink at all, actually: the seed parent was the ambiguously orangish-pink 'Orange Hot,' and the first buds (the ones that later aborted) started out pink and turn a bit coral as they aged. I figured that meant that Ivy was going to wind up coral or orange, but it looks more like 'Gemini' (red-pink with a white spadix) than anything else, and the current bud is the same red-pink: 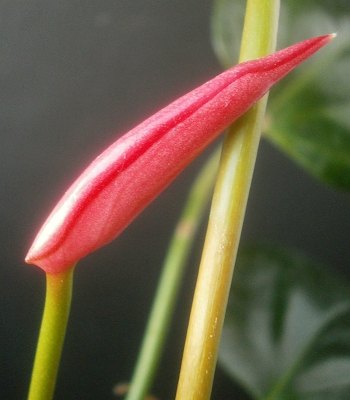 Ivy also has unusually long, narrow leaves. Not record-setting or anything, but it does stand out a little. 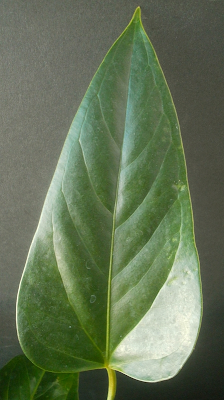 The second generation of seedlings is solidly underway, and even accelerating, now.1 Some of the earliest second-generation seedlings are big enough to look like actual little plants already. 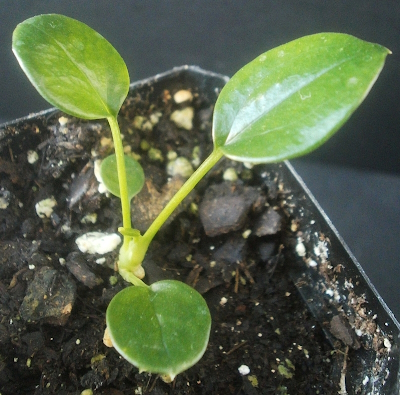 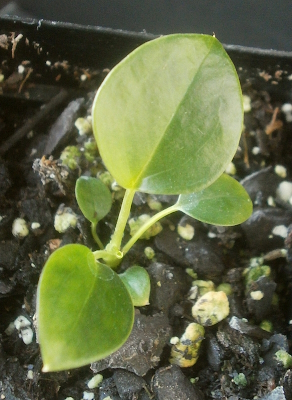 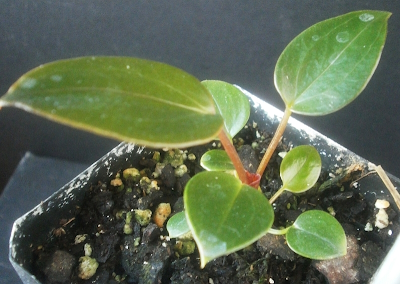 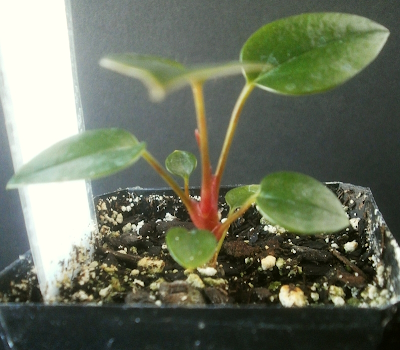 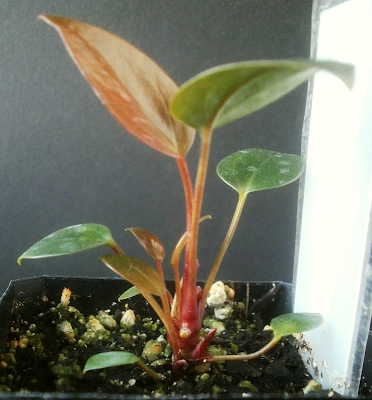 #649 "Layona Davenport" (warning: Katy Perry music at link2)
seed parent: #276 "Zach Religious"
sow date: 15 May 2014 (7 months old)
And of course there are berries developing all over the house, and seeds germinating in containers, and so forth. 'Midori,' the green-blooming plant I bought in July, has in fact been pollinated once, for sure, has produced a second bloom (maybe pollinated, maybe not), and looks to be fairly close to having mature berries, which is especially exciting. I have maybe, maybe, finally also pollinated 'Florida' (the huge orange-bloomer), 'Krypton,' which has small red-purple blooms, and 'Joli,' which has complicated blooms that shade from purple to hot pink to red-orange as the plant ages. Time will tell. I've been technically successful once before with 'Krypton,' but not with the other two, and 'Krypton' has produced only a handful of fairly weak seedlings so I'm not sure it's the best plant to be breeding with in the first place. 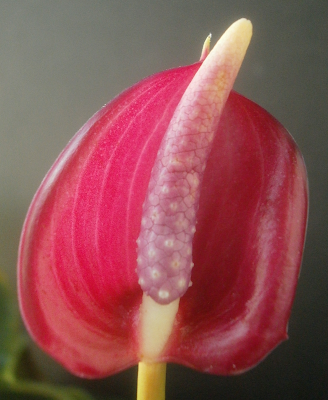 (But it's pretty.)
Finally, there have been four new first-time buds since the last report. The furthest along is #334 "Jean Poole," which is the Anthurium seedling I'm most excited about lately -- the bud color isn't anything new,3 but the foliage is great. Dark, dark green, with brown new leaves, plus the leaves are gigantic4 and slightly wavy along their edges, something I've only seen on 'Red Hot' (slightly wavy) and the NOID red-purple (very wavy), so I'm guessing that one of those is the pollen parent.5 It's also growing nicely upright so far, without any need for stakes or other supports: a lot of the seedlings only grow upright when very young, and then flop over, which is obnoxious. 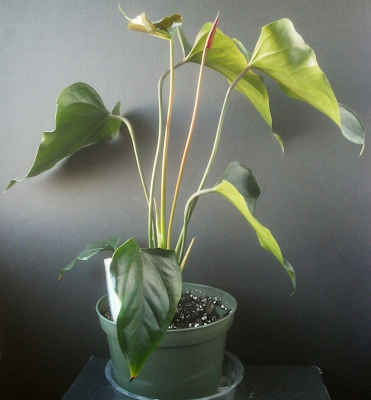 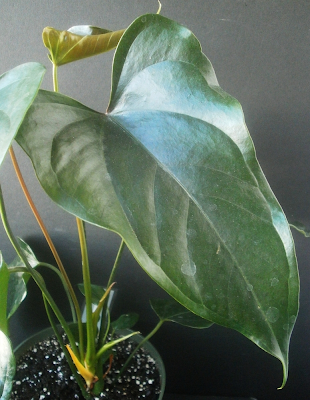 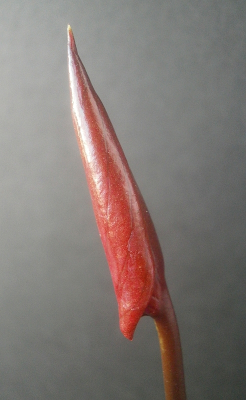 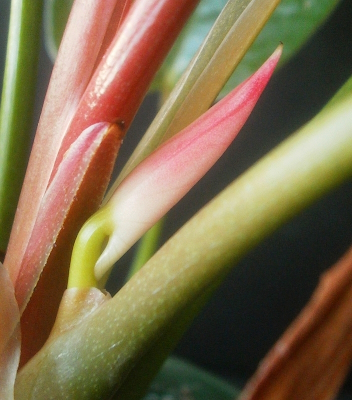 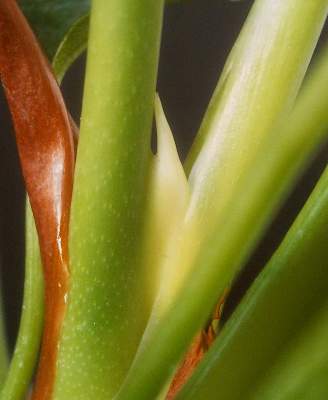 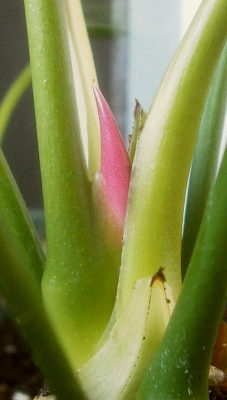 The first two of those look like they're probably going to be pretty ordinary pink or light pink spathes, but Tasha has a slight purple tinge that makes me think she may end up like 231 "Rhea Listick" or 035 "Alyssa Edwards". Both Rhea and Alyssa are favorites of mine, so that's at least a little exciting.

Also finally some new buds on several of the older seedlings, finally, after a long period without many blooms, so I suspect we'll be seeing more first-time buds in the next couple months. Why did all the plants stop blooming? We do not know. Why did they start blooming again? It is a mystery.6 I'm just happy to think that things might get moving again. I don't know what I would have done without the Schlumbergera seedlings.


1 Which is actually sort of a problem: fairly soon, I'm going to have to stop germinating every seed I get, and stop potting up every germinated seedling I get, just because I don't have room to grow them all out. I knew this day would come eventually, of course, but for some reason had convinced myself that it was still in the distant future.
2 Yes, that deserves a warning. (As if I would let you stumble unwittingly into a Katy Perry medley!)
3 Sort of a red / dark red, along the lines of #149 "Heather Boah," #002 "Alexis Mateo," #203 "Anna Mae Hemensouz," and #005 "Chad Michaels." It's nice, and I like it, but it's nothing new on its own.
4 Similar in size to #234 "Ross Koz," though a bit longer and narrower. The biggest leaf I could find to measure was 8 inches (20 cm) long and 4.75 inches (12 cm) wide. It doesn't really compare to 'Midori' or 'Florida' -- the biggest 'Florida' leaf I think I've seen so far is 14 x 8.25 inches (36 x 21 cm), which is also the house record for the A. andreanum hybrids -- but Jean is damned respectable all the same.
5 Probably the NOID red-purple. It's been a looooooong time since 'Red Hot' bloomed for me.
6 No, really, it kind of is. They've never done this before. And it can't be a natural seasonal thing either, because the plants upstairs in the living room kept on blooming steadily throughout the summer and fall. Best guess? They didn't like the "white oil," too many of them were busy working on berries to put any effort into new flowers, they were so crowded that many of them weren't getting adequate light to bloom, or some combination of the three.
Posted by mr_subjunctive at 3:00 AM 1 comments