Basically no information to go along with this one. I don't remember what was on the tag you can see in the photo, but whatever it was, it wasn't an ID. It could have been a price tag; I'm pretty sure this was on one of the sale tables.

No flowers, either, though one could argue that a flower spike on these leaves would be Too Much. (Are those unusually wide marginal stripes, for a variegated Phalaenopsis, or do I just not have much experience with them?) 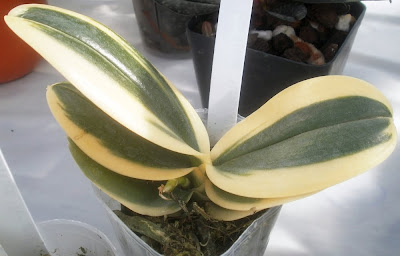 And it's not like the flowers would necessarily make it possible to identify the plant anyway. I assume there must be tons of different variegated phal varieties out there.

So, we can add another one to the running totals:

Hey, remember last Friday, and the post about houseplants that may or may not produce seeds? And how I said I'd tried with a Spathiphyllum but wasn't sure if I was actually going to get anywhere? Well, we still haven't gotten anywhere, but we're one step closer.

While working on that post, I went downstairs to look at the plant in question. Spathiphyllum spadices are full of a bunch of individual little bumpy bits, which there's probably a botanical term for but I don't feel like trying to figure it out now. One of the bumpy bits had changed color from green to a dull orange, which you saw in the list on Friday if you read the footnotes.1 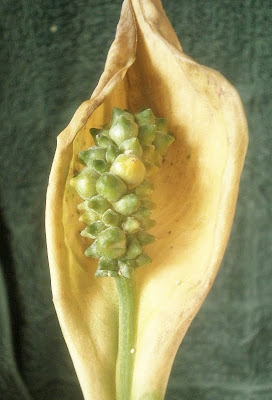 In this picture, it looks like there's more than one successful pollination, or at least potentially more than one, but only the one in the center of the shot seems to have been fertile.
Naturally, I wondered how this was going, and whether anything was going to be ready anytime soon. I'd been expecting that Spathiphyllum fruits would work more or less the same way that Anthurium ones do: Anthurium spadices begin to swell up in a bunch of little bumps, and then the bumps get bigger, and change color, and eventually you wind up with a bunch of little rubbery, slightly translucent berries, each containing one large green seed (occasionally two) suspended in a sort of thick goopy pulp.2

So, I poked at the one bumpy thing that had changed color, figuring that I'd just try to rock it back and forth slightly to see whether it was properly rubbery or still hard; I was hoping to get some idea of how close it was to being ripe. 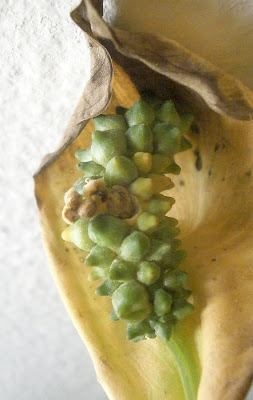 But this happened instead. It could hardly have been more different from an Anthurium fruit. The bumps didn't really swell that much. They did change color, but it was a lot more subtle than the bright orange most Anthurium fruits turn. Instead of a rubbery skin over raisiny pulp, the skin on this remained hard, and just kind of broke when touched; it's not flexible at all. The pulp was nearly nonexistent -- there was just enough there to keep the seeds slightly stuck to one another, but not enough pulp for me to be able to discern a color. I didn't even try to wash the seeds off, as there didn't seem to be anything to wash. Also, instead of one or two seeds, this produced eight. 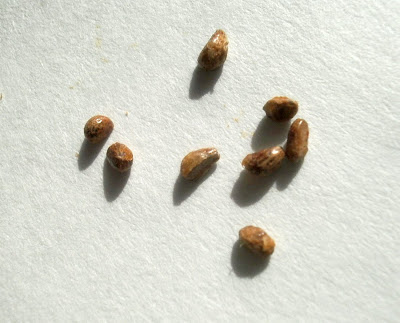 (Photographed on a paper plate, if the background texture gives you any sense of the scale. If it doesn't, my best guess would be that they were about 3 mm / 0.1 in long.)
As this is a new experience for me, I had no idea how one is supposed to germinate them. I decided to drop them in damp vermiculite and see what happens.3 They were planted on 26 October; nothing visible was happening as of 29 October, but obviously that's still way early. Rumor has it that germination takes about ten days, so nothing ought to happen until 5 November at the earliest.

Even if nothing comes of this and they don't germinate, it was totally worth it just to see what the seeds and fruits look like. I'd always assumed that they must exist,4 but it's not really the sort of thing one dreams of seeing. If they do germinate, well, I'm a little worried, considering how excitable I can be when it comes to aroid seedlings.


1 Which you should always do.
2 The best description I can give for the texture is that it's somewhere between the flesh of a plum (a little stringy and wet) and the flesh of a raisin (thick, sticky, semi-solid). Closer to the raisin.
3 Which turns out to be approximately correct: some too-late-to-be-useful googling suggests that mixing in some chopped sphagnum moss would probably have been better than straight vermiculite, but this will probably be fine. It might even be preferable, since I don't actually have chopped sphagnum on hand, and wouldn't have an easy way to sterilize it if I did.
4 It turns out that there is one photo available through Google image search. Apparently I'd been so satisfied with assuming their existence that I'd never bothered to look. (By the way: the seedlings in the bottom right of that page look adorable. Maybe I do hope I get lots of germination after all.)
Posted by mr_subjunctive at 3:00 AM 2 comments

So I recently discovered the blog Fashion It So,1 which fills a part of my life I didn't even know was empty by supplying snarky recaps for episodes of "Star Trek: The Next Generation" that focus primarily on what everybody is wearing. There is a surprising amount of weird late-80s fashion going on in TNG, it turns out, and although a lot of the outfits look like crap, one respects the costume people for attempting to do something interesting, instead of just dressing everybody in whatever was actually fashionable at the time and pretending that 80s fashion was timeless. 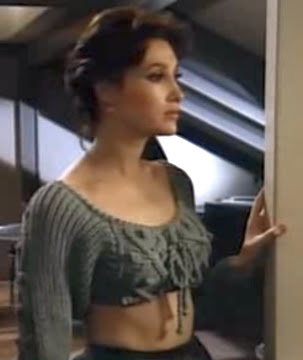 (Sample snark: "Cable-knit sweaters: Ireland’s lingerie")
I bring this up partly because it's an exciting new time-wastey thing for me, and partly because the orchid of the day has a certain Next-Generationess about it. 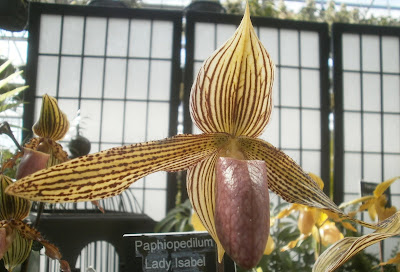 Paphiopedilum Lady Isabel 'America' x Paph. sukhakulii 'Big Guy.'
I'll grant you that the costume department at TNG was not much into burgundy-on-mustard-yellow pinstripes, or stripes in general, actually. This is about as stripey as things got, in the handful of pages I've read so far: 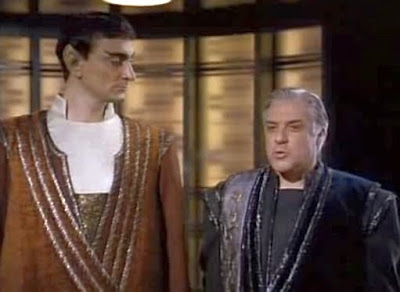 (There's actually a really good reason why a TV show costumer might want to avoid closely spaced stripes, which I will put in a footnote for you.2)

But, anything as shiny and lavender-pink as the orchid's labellum is going to make me think of TNG. Lavender-pink was such a hot color in the late 1980s. E.g.: 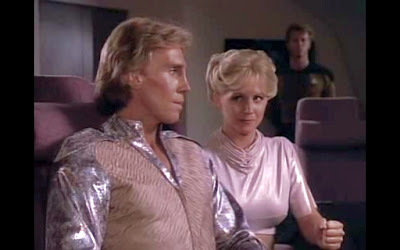 Tell me you don't see a resemblance there.
This doesn't have a lot to do with the orchid, I know, but there's very little to say about the orchid. I mean, the parentage is right there in the title, and both parents seem to exist. (Google doesn't turn up much about the clone names 'America' or 'Big Guy,' but the grex Lady Isabel exists, as does the species Paph. sukhakulii, so I'm satisfied.) Also everything was spelled correctly, so I don't have that to complain about. Therefore, digressions about 25-year-old television shows.

Photo credits:
TNG: from Fashion It So, though photos have been altered in size, sharpened, and color-tweaked.3
Voyager sickbay: Memory Alpha.
Orchid: me.


1 (Thank you, IO9.)
2 Closely-spaced stripes, when translated to a TV screen, will produce strobey Moiré patterns instead of looking like stripes. Sometimes this can be cool, but usually it's just annoying.
The husband and I have been watching "Star Trek: Voyager" lately, because neither of us cared enough about it to have ever watched when it was actually airing and because we occasionally need something to watch that we don't have to think too hard about, and the Sickbay set in "Voyager" has this insane black and orange stripe pattern in the background a lot of the time, which means that about half the Sickbay scenes are basically unwatchable. 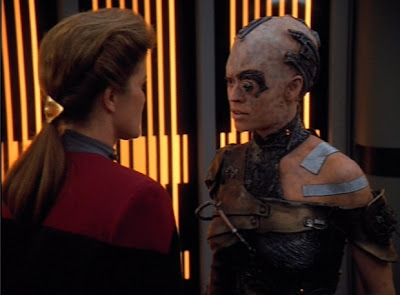 Every time the camera moves, the background pulsates orange. Whoever designed that shit should never be allowed to work in television again.
3 Screencaps of TV shows are always ridiculously dark, for unknown reasons.
Posted by mr_subjunctive at 3:00 AM 5 comments