So, do you remember in the genetics post where I said that if anybody wanted to provide me with an Anthurium 'Midori' so I could pursue my dream of green- and brown-blooming Anthurium seedlings, they should feel free to do so?

An anonymous donor did. 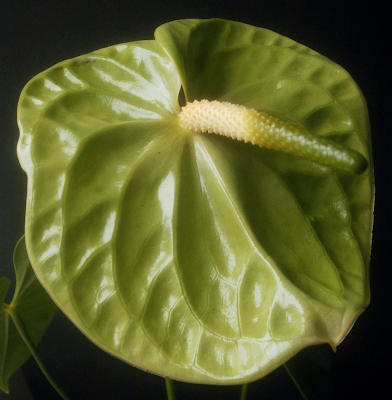 I'm not sure if the color is right or not. The first set of photos I took came out a lot more yellow than it seemed in real life, but I tried again on a different day and got basically the same thing, so maybe the pea-soup / algae-pond green is how it actually looks, and it's my brain that's getting it wrong.

So far, everybody who's seen it in person (myself, husband, parents and two siblings) has had exactly the same reaction: an initial oh, hey, that's neat followed by a but . . . so that's all it does, though? That's a little weird. I don't know if I like that. 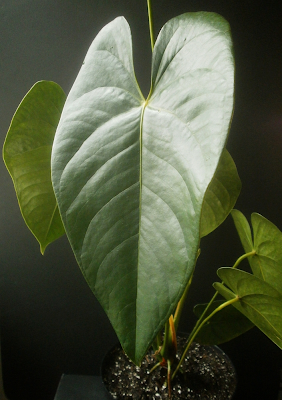 I still haven't decided whether I like it myself, as a plant to look at and care for. But as a plant to breed, I'm very excited. (Unfortunately, few of the Anthuriums here are shedding pollen at the moment, so I don't expect this bloom to lead to berries. I'm all over the next bloom, though.) 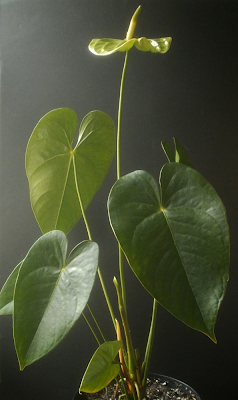 For anyone who might be interested, I ordered this from Aloha Hawaiian Flowers, which was the only place I could find online that sold whole 'Midori' plants, as opposed to cut flowers. No complaints about the company or the plant; I was a little irritated that the only shipping option I was given was 2-day FedEx, because that was expensive (as 2-day shipping would be for any two points separated by 3900 miles and half an ocean), but on the other hand, I got to choose the day it would arrive, it arrived when they said it would, and there was no damage to the plant from shipping, not even a creased leaf. So the shipping cost was arguably worth it. I did have to repot the plant when it arrived -- it had been potted in what I assume was black lava gravel, which I thought would probably not work as well indoors as it does outdoors in Hawaii. The plant has shown no sign of being traumatized by the shipping or repotting. 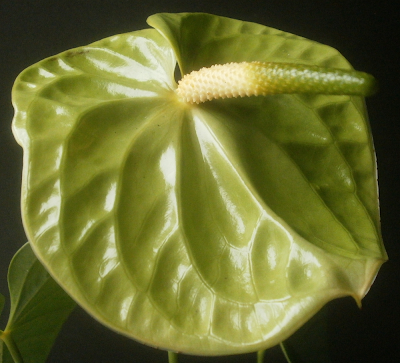 And now, we begin the long wait for pollination, and everything that comes after pollination. Best-case scenario, I'll have a 'Midori' cross blooming in January 2016 or so.

It is no longer possible to stretch the definition of "mid-June" to continue doing mid-June Anthurium seedling updates, but I still have stuff from the book to talk about, so.

A lot of what's left falls into the category of "things I'd noticed myself, but it's nice to have the book confirm it for me anyway." Plus there are a few things I could have noticed if I had been paying closer attention, but only became certain about after taking regular photographs of all the blooms over a period of a couple months.

For example, spadices move over time. When the spathe first opens, the spadix will be lying more or less parallel to it, but as time passes, the spadix becomes more, um, let's call it "perpendicular," to the spathe. We'll let #097 "Colin Ambulance" demonstrate this.

You also probably noticed that Colin changed color too.1 Not all Anthurium blooms do that to the same degree, and they don't all change color in the same direction,2 but enough of them do that it's been sort of surprising to see the changes when I look back at the photos. The book doesn't mention this having much effect on their commercial viability, which surprised me. Certainly it doesn't seem to be a problem for the plants that I see for sale: 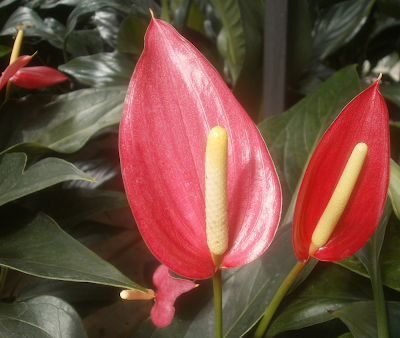 NOID Anthurium spotted at Wallace's, during the orchid show in March. I'd guess that the one on the left is the older of the two.
I've also finally begun to understand the mentions of spadix color changes that I've been seeing for as long as I've been reading on-line about Anthuriums. Taking pictures helps.3

When Anthurium spathes first open, the spadices are usually a uniform color. (If the spathe is red, the spadix is usually yellow, occasionally green; if the spathe is pink, the spadix is usually pink.) As the inflorescence ages, a different color, usually white (for red spathes) or lavender (for pink spathes) appears at the base and moves toward the tip. A third color sometimes appears after that, again moving from base to tip. That's usually brown, but I've also seen red and green.

Because I'm usually more interested in the spathe than the spadix when I'm taking photos, I don't have great pictures of this, but here's the progression for one inflorescence of #245 "Sawyer Ad," as it changes from yellow to white to yellow-green: 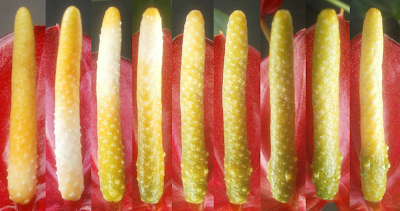 (From left to right: March 24, April 15, May 5, May 15, May 23, May 30, June 9, June 18, June 24.)
The color change is related to the maturity of the individual flowers on the spadix, which you can tell by the way that the base of the spadix is starting to get lumpy, the way Anthurium spadices do when they've been pollinated, just after it turns green This is one of those things that has long puzzled me -- everybody always notes that the spadix changes color as the flowers mature, but nobody ever specifies the timing or explains how: do they mature just before the color change? Just after? As best as I can tell, the flowers are most receptive to pollen during the white phase, and are finished by the time the third color comes along. Here's #239 "Russ Teanale," which got pollinated a lot more thoroughly, for comparison:

(From left to right: April 15, April 18, May 5, May 15, May 23, May 30, June 9, June 17, June 24, June 29.)
From the look of that, the lowest flowers were already receptive to pollen on April 18 (2nd from left), and had definitely been pollinated by May 23 (5th from left). Not sure what was happening during the month in between, but it's at least consistent with the idea that the window of opportunity is indicated by the second spadix color, whatever it happens to be.4

This doesn't have a lot of consequences for me, but it might save me time; I at least don't have to worry about trying to pollinate blooms that are clearly signaling that they're done. It also might help me to get 'Florida' pollinated sometime, since it seems from this that most of the times I've attempted to pollinate it, it hasn't actually been accepting pollen.

There are several more Anthurium-related items to share, which I will get to in time. By the time I'm done with those, there will be even more first-time blooms to show you. (#144 "Graham Reaper" is so pretty, you guys.) And then some more buds will have been produced, and so on and so forth. So if you've been thinking, what I really want to read on PATSP this summer is lots of Anthurium-related posts, I have good news!


1 There's some variation because the lighting isn't 100% uniform from one photo session to the next. I've been taking these pictures in the same location, during more or less the same time of day, with the same camera, but the cloudiness varies, and my camera's auto-correct color is a bit of a problem too. So it's not perfect, but it's good enough for you to be able to see what I'm talking about.
2 #149 "Heather Boah" is interesting for being one of the few to get darker over time, instead of lighter:

And most of the red spathe / yellow spadix blooms stay essentially the same color no matter how old they get. E.g. #223 "Patty Cake," which lightens very slightly:

The brown tip that appears between May 30 and Jun 18 is the result of it being too close to one of the fluorescent bulbs; it wouldn't have done that had I not accidentally burned it. Also, these photos may exaggerate the amount of color change, since the last two seem to have more light reflecting off the spathe than the first three. I try to keep reflections minimal, but it often doesn't work.
3 As the man said, you can see a lot by just looking. What Mr. Berra neglects to mention is how time-consuming looking can be sometimes.
4 I would have tried this with one of the pink/pink blooms, but they tend to have very perpendicular spadices, so I don't usually have consistent in-focus photos of them.
Posted by mr_subjunctive at 3:00 AM 0 comments 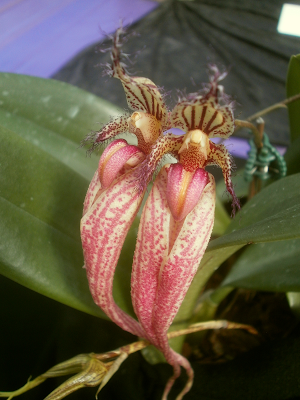