You may or may not remember last summer's Clivia blooms. I apparently never bothered to say, officially, that the blooms had turned into fruits (or at least some of them did; I wound up with about a dozen), but that happened too. 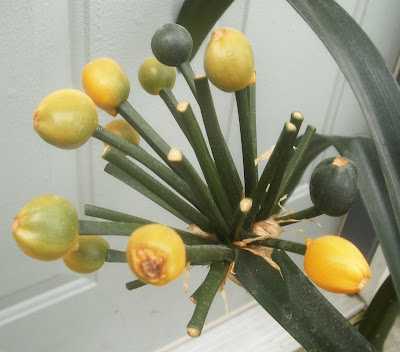 In mid-May, I noticed that one of the fruits had begun to change color, which was exciting, because it signified that they were about to be ripe enough to plant up. I figured I'd wait until they turned red, like they're supposed to, then start a bunch of seeds and have a ton of new plants to play with, finally. (The "finally" is because neither of my Clivias have ever offset.)

Except that it didn't turn red. So I left it on the plant. And then more of them started to change color, but they didn't turn red either. And so I worried. Maybe they're never going to turn red. Maybe something is wrong. It's probably just as well; I don't know what to do with them once they're ripe anyway. Easy come, easy go. Etc. 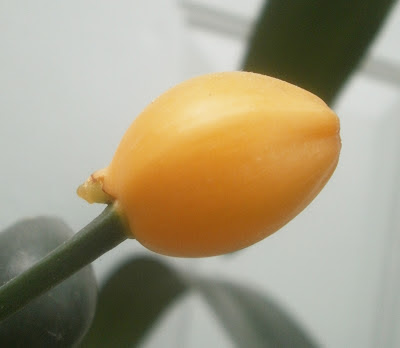 Yes, that's a root growing out of the berry. Apparently this is a thing that happens sometimes, with Clivia. So the game, such as it is, is back on again. (Not that it was ever off, but I didn't know that.)

And it turns out that yellow-blooming Clivias were always supposed to produce lighter-colored fruit than the regular orange-blooming ones:

It's just that nobody had ever told me.

So now I guess I have some Clivia seeds to start. I'm not going to get too excited about this just yet, since a lot of what I'm seeing on-line about starting Clivia seeds makes them sound very susceptible to fungal diseases, and goodness knows we have some fungal diseases here. But, apparently we're further along in the process than I realized, so I'd best hurry and catch up. 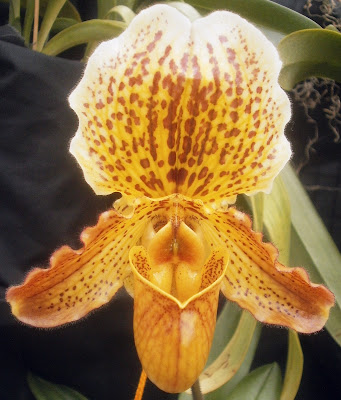 I'd be chattier, but I was up at about 4:30 AM yesterday, because a storm was rolling through and it was loud. I could have tried to sleep through it regardless, but I was worried about the plants outside -- the forecast had said there might be hail -- so I stayed up worrying about them until the storm had passed, even though there wasn't much I could have done to help them, had hail started to fall.

Hoping to get things together for some more substantial posts soon.

In March 2009, the husband and I went to Cedar Rapids and bought a NOID Phalaenopsis at Frontier Garden Center. I didn't want to, because I was pretty sick of Phalaenopsis by this point, but he paid for it, so okay, fine.

And now we have this: 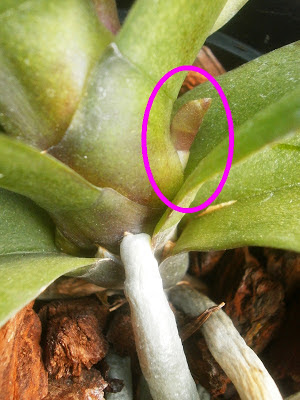 How did this happen? I do not know. It just did.

Am I happy about it? I do not know. I think I'm confused? More than anything?