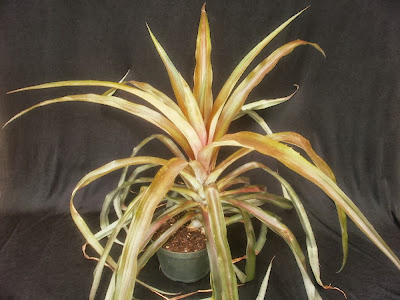 September 2013.
I've had Ananas 'Mongo'1 since November 2008, when we got some in at the ex-job. This is long enough ago that I don't remember much about the event, but I blogged about it at the time, so you can read that if you're interested.

It's grown pretty reliably ever since, and this year I put it outside for the summer. This was at least partly because it had gotten so big, and I wanted it out of my way, which is counterproductive because that only made it grow faster, but it seemed like a good idea at the time.

Depending on how much sun it was getting, it fluctuated between brown, green, and brown-and-green striped, and it got big, and it attracted frogs, and so on, and then at some point in mid-September, I noticed that it was getting really red in the center. Which was confusing, because I was pretty sure all the plants were getting less light, as we approached the equinox, but I took some photos and went on, as you do. 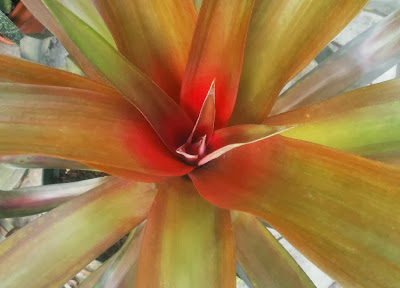 And then it got more intense. And then I started to see a bunch of little tiny bracts emerging from the center of the plant, and I clued in to the fact that this was the beginning of an inflorescence. 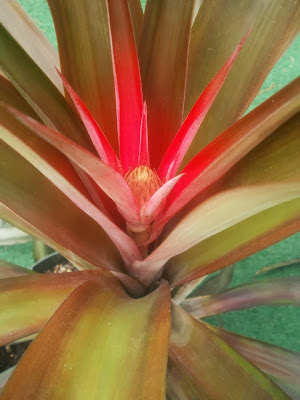 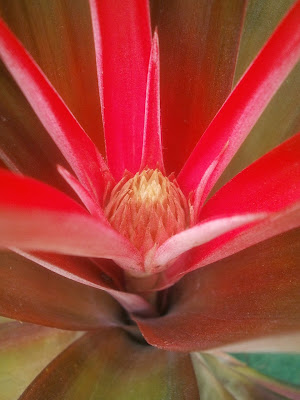 Since then, things have gone pretty much how you'd expect. First the inflorescence appeared -- 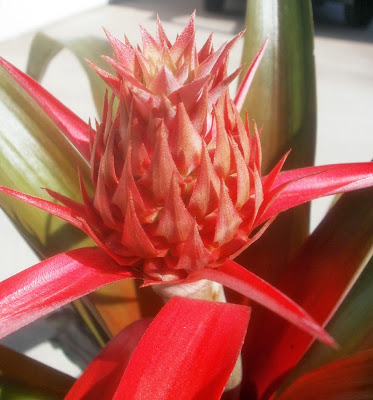 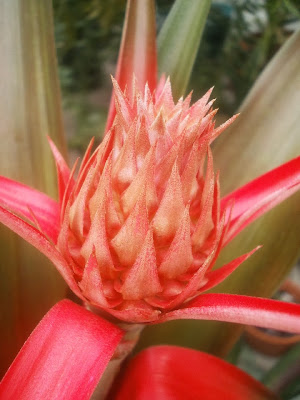 -- and then the true flowers (lavender) began popping out. 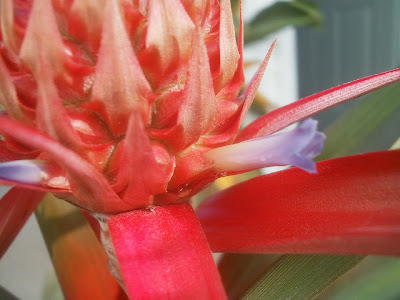 Though they never pop out in focus. Dunno what that means. 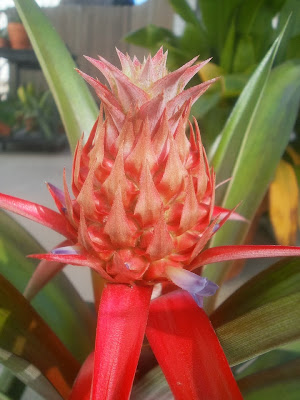 This is easily the Big Plant Event of the Summer, like last summer's one-two punch of Epiphyllum and Clivia. I mean, other things have happened, some of which were also very exciting, but this is the most dramatic and unexpected. Like with the Clivia, I'd pretty much assumed that my conditions weren't going to be suitable for a bloom, and it was just going to be a foliage plant for me forever, and I was fine with that. So blooming is a huge bonus. 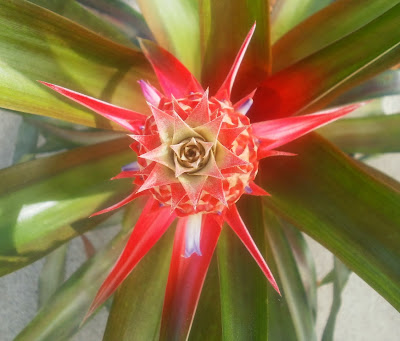 This is my favorite picture of the plant so far. I feel like it ought to be on top of a Christmas tree or something.
Next up: offsets. And the inevitable attempt to root all of them, no matter how little room I have.


1 Has probably been referred to previously as Ananas comosus 'Mongo' on the blog before, but the most recent web-surfing I've done on the subject suggests that it is not in fact a cultivar of A. comosus, but is instead a hybrid. Nobody will say what species are involved in making the hybrid, but there are only about eight or nine possibilities.a If I were being forced to guess, I'd guess that there's probably some A. nanus in there, because nanus has the small, bright pink fruit, and because many of the websites talking about 'Mongo' make reference to how small it is. (The smallness, in my opinion, is overstated. If smallness can be overstated. My plant is a solid 3 or 4 feetb across, which is medium to large for plants in my collection.) The color suggests some A. lucidus genes are in there too. But that's totally a guess.
a Wikipedia says eight; Plant List says nine. The two sources agree on A. ananassoides, A. bracteata, A. comosus, A. fritzmuelleri, A. lucidus, A. nanus, and A. parguazensis. Wikipedia adds A. erectifolius, which Plant List claims is a synonym of A. lucidus, and Plant List includes two species not on Wikipedia's list: A. monstrosus and A. sagenaria. We will leave the question of which of these, if any, is a legitimate species to the pineapple taxonomists to fight out among themselves in tequila-fueled motorcycle cage matches, as is the pineapple taxonomist custom.
b (0.9 to 1.2 m)
Posted by mr_subjunctive at 3:00 AM 10 comments

I didn't exactly intend to go for two days without posting, but what's happened is that my brother took advantage of a we're-so-sorry-we-screwed-up-everything-associated-with-the-SimCity5-launch-so-terribly offer from game publisher Electronic Arts (EA), wherein they were selling a bundle of five games very cheaply (I want to say $5 but am too lazy to check on this), and then he gave me the redemption code for one of them because he already had it. And the game in question is Sims 3. And it happens that I now have a computer capable of running Sims 3, so . . . well, you see where this is headed.

The good news is, 1) Sims 3 shouldn't affect the actual posting frequency all that much. With the previous computer and Sims 2, the computer wasn't powerful enough to do anything else at the same time as Sims, plus whenever I wanted to play, I had to set aside an hour and a half or so for the game to load first (no, seriously), plus however much time I wanted to spend actually playing. I don't have these problems now, so Sims won't be cutting into my time nearly as badly. Also 2) I've made considerable progress on dealing with the huge number of photos I took in September, so some of the random plant events from August and September that I haven't posted about yet will be coming relatively soon.

The bad news is, part of the reason Sims isn't going to affect the projected posting frequency very much is that the projected posting frequency was already pretty low. This is because it's that time of year when I have to bring plants inside for the winter, and that's an extremely complicated, boring, and time-consuming process. At the 60% complete mark, I've already run out of room, so some fairly extreme things are about to start happening to the plants with scale, and to the larger underperformers.

Meanwhile, there's an orchid. It's not going to set the world on fire with its beauty or anything, but it's okay. 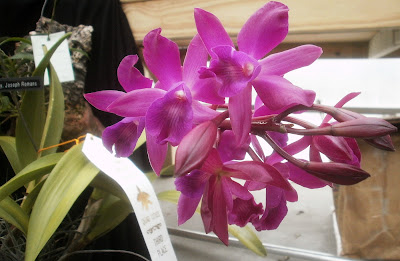 And really, setting the world on fire is an unreasonably high standard to have for orchid beauty, now that I think about it. (When's the last time that even happened?)

The tag said "Cty. Joseph Romans," but after some investigation this turns out to be the equivalent of Enanthleya Joseph Romans, which itself is a hybrid of Cattlianthe Portia with Encyclia phoenicea.