I have in my notes that the pictures here are a bit more impressive than the plant was in person, on account of the flowers being very small. 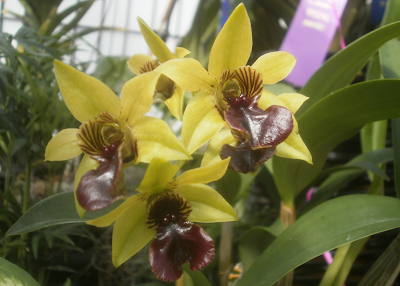 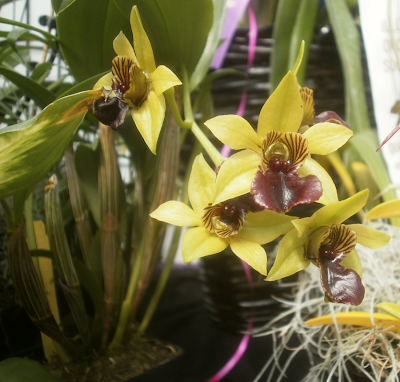 I really like this flower, but I'm not going to talk about it because there's something else on my mind. 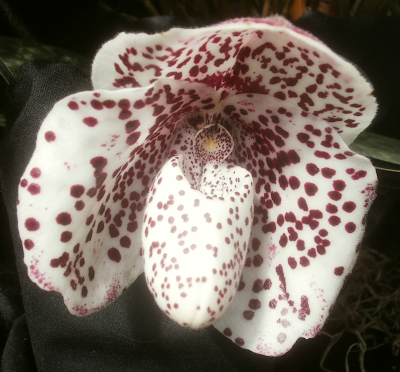 
Please do not post pictures of my plants unless you ask my permission...owner, Phrag. Sergeant Eric 'Timberlane' AM/AOS CCM/AOS

Which refers to this post from 2012.2 This confused me on multiple levels, since the plant's owner was not being disparaged in any way (indeed, the photo contained no text which could have identified him3 as the owner), and since I felt like the term orchid show sort of implies that people might, you know, look at the orchids.4 Photography is not discouraged at the show, and it could hardly be a surprise to the orchid's owner that people photographed his plant, since at least a third of the people at the show, every year, are walking around with cameras and sort of obviously taking pictures of things. The way the comment was phrased, it seemed like the objectionable part was the posting of the photo, but the photo -- that specific arrangement of pixels -- belongs to me, legally, and I can do whatever I like with it, regardless of who the subject belongs to, so if that's the problem then somebody's just going to have to deal.5

I spent a few days being kind of riled up about this, and then I remembered something. Rarely, I get comments on the orchid picture posts complimenting me on my beautiful orchids or whatever, in the sort of way that implies that the people leaving the comments believe -- in spite of comments to the contrary and tags like "Wallace's Orchid Show 2014" -- that the orchids in the photos belong to me. So perhaps the person leaving the comment believes that I'm misrepresenting the orchid in the photo as being my own plant, rather than his. I don't think that would technically be illegal to do, but obviously it'd be kinda douchey of me if I were.6

So. For the record.7

• Displaying pretty things in public, at a show, where photography is not only not prohibited but actively encouraged, is likely to result in people taking photos of the pretty things. If this is a problem for you, you should probably stop entering your orchids in shows which are open to the public.
• Photographs legally belong to the photographer who takes them unless / until the rights to the photo are sold or the photos specifically placed in the public domain. I don't have to ask anybody's permission to post my own photos on my own blog, no matter what the photos are of.
• All the PATSP posts tagged with "Wallace's Orchid Show [year]," where "[year]" = 2010 or any year after 2010, do not depict my own plants and were never intended to imply that they did depict my own plants.

Photo credits: mine, mine, all mine (though the plant is not mine)


1 Which I published and then accidentally deleted, so you won't see it if you go there. For future reference: there is a "Delete forever? (Cannot be undone)" checkbox on the comment-deletion screen, but whether you check the box or not, there is no way to recover deleted comments. The only difference checking the box makes is that if you check the box, it will be as if the comment never existed in the first place, and if you don't check the box, the comment will be replaced by a line saying "This comment has been removed by a blog administrator."
So if you publish a comment and then have second thoughts about it, your options are between having it publicly readable forever, or having it publicly unreadable forever -- there's no option to take it down temporarily but preserve the option of restoring it later, even if "cannot be undone" implies that there is a way to undo the deletion.
2 And this photo, specifically: 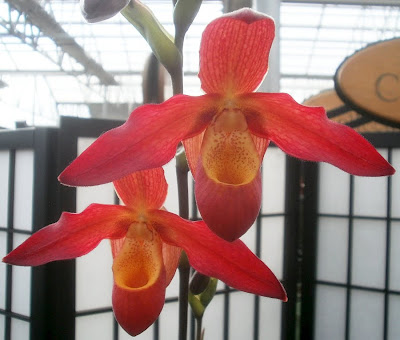 3 Pretty sure it's a him, based on blog statistics from the same time, the members of the Illowa Orchid Society named at its home page, and Google. And the sense of entitlement the comment projects.
4 I mean, it's not the 2011 Illowa Orchid Society Describe, now, is it?
5 In the U.S., at least, people can apparently take a photo of you whenever you're in public and reproduce it however they like, with certain exceptions made for context. Like, you can't use a random photo of some guy to illustrate a newspaper article about alcoholism without getting the model's permission, lest it appear that you're saying they're an alcoholic. But otherwise, there's a general assumption that being in public means you've implicitly given permission to have your picture taken. And that's for people. (Ref.) I imagine there's probably even less of an expectation of privacy when you're a plant. And less still when you're a plant that has been entered in a public orchid show.
6 (It's maybe worth pointing out that the original comment doesn't say that. This is just my guess as to what's bothering the guy. A literal reading of the comment implies that he believes that he owns any photos taken of his orchids, and that he should be consulted before anything's done with said photos.)
7 As far as I can tell, the guy who left the comment hasn't come back to the blog and will probably never see this defense of mine anyway. I suppose if the situation comes up again, I at least have the defense all written out and linkable now.
Posted by mr_subjunctive at 3:00 AM 10 comments