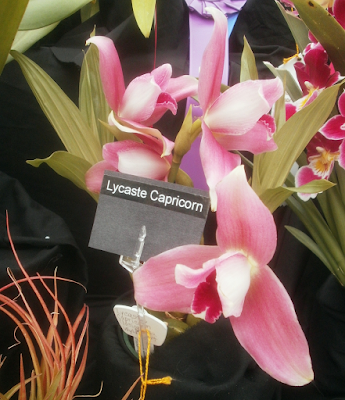 I couldn't find any photos to verify the ID here, but I'm assuming it's correct, in which case the ancestry information is: 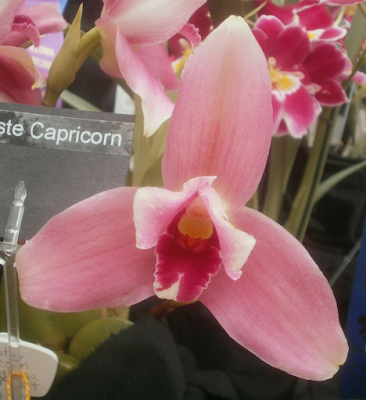 
1 The relative is a Lycamerlycaste, an intergeneric hybrid of Lycaste and Sudamerlycaste. I'd never heard of the latter genus before writing this post, and I'm so happy I bothered to look it up. Sudamerlycaste appears partial to green flowers, which you wouldn't think would be that interesting or pretty, but oh my god. (S. locusta, from the "oh" and "god" pictures, is allegedly even apple-scented. Be still my heart.)
Posted by mr_subjunctive at 3:00 AM 3 comments

I was surprised to find out that the last time I mentioned my Strelitzia juncea seedlings was in May 2014. Back then, there were only two of them: I thought that was all I was getting, but then a third came up in a pot of Coffea seedlings a few months later (I'd reused the soil without taking the Strelitzia seed out.).

The three aren't setting the world on fire with their beauty or speed of growth or anything, but they're all still alive, and nearly at their third birthday now. I don't have a photo of the three of them together, because I don't have a large enough background for that (as it is, I can barely photograph either of the larger two), but they're pretty similar-looking anyway so I'm not sure it matters. Here's one of the first two, in February, in a 6-inch (15 cm) pot:

And here's the late arrival; its pot is 4 inches (10 cm) along the diagonal: 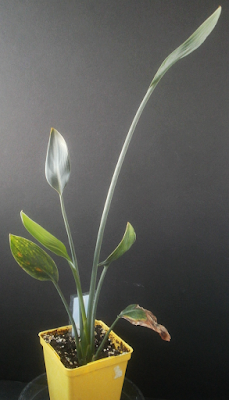 In both cases, it looks like there's one leaf that's much longer than the others. This is partly a matter of perspective, but the two larger plants have been making dramatically longer leaves recently. I think this is how they're supposed to work, and not a sign of inadequate light, but I have to admit I don't know what normal looks like with this species.

As a houseplant, S. juncea isn't meaningfully different from S. reginae or S. nicolai. They had a minor scale problem quite a while ago, when they were small enough to wipe down with rubbing alcohol, and thrips were a problem once too. I don't actually know how I got rid of the thrips; they just kind of . . . stopped.1 A miracle, perhaps.

Flowers are unlikely. Every year, I think about maybe putting them outside for the summer (which wouldn't guarantee blooming but would make it more likely), and every year I come up with plants that deserve the honor more. (Space is limited; I have to prioritize.) But maybe someday, if the seedlings last long enough.


1 (They never did much visible damage; my suspicion was that they were landing on the Strelitzias in the course of running around the house but not actually feeding on them. Either that, or they were trying to feed and it just wasn't working.)
Posted by mr_subjunctive at 3:00 AM 2 comments

Diego's first bloom is, so far, also his only bloom, but it was okay: 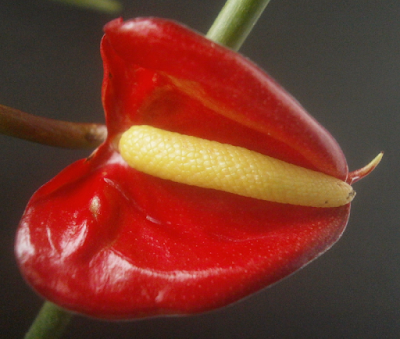 The bloom color, frequency, and size are all average at best, but he does seem to be more resistant to thrips attack than most. 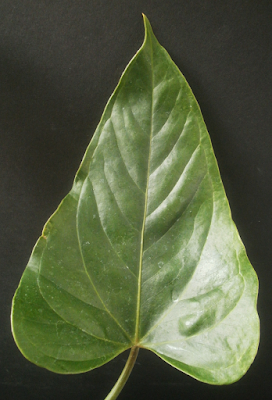 Not sure if thrips resistance is enough on its own to justify keeping the plant around, especially since there are plants from the same sibling group that are just as resistant and have nicer blooms,1 but I'm willing to keep him around for a little while longer to see if anything interesting happens. 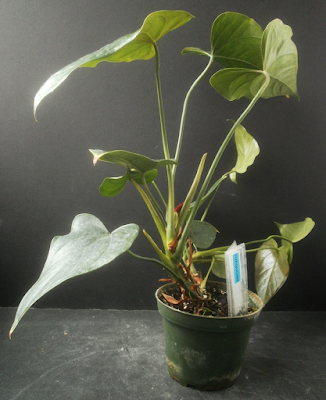 And I'm back! Or at least that's the plan: I suppose I haven't proven anything yet.

Good news: new posts scheduled almost every day from now until early October.1
Bad news: most of them are going to be Anthurium seedling posts, and not very interesting.
Good news: a few of them actually are slightly interesting.
Bad news: I'm not going to have a lot of time to work on them, as quickly as I'll have to write, so even the interesting ones will be pretty short, and probably less interestingly written than they could be.

I'll leave it to you to decide whether this is overall a good thing or a bad thing.

In any case, here is Nina: 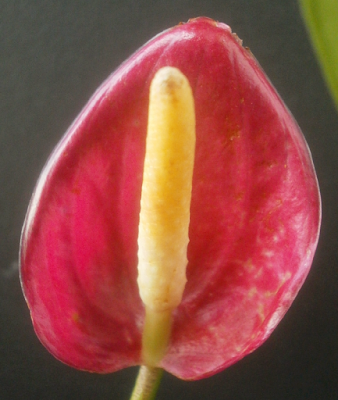 My Anthurium-breeding book says speckling is a dominant trait, so there was reason to think Nina (the first seedling of 'Peppermint Gemini' to bloom) would be speckled, but alas, the only thing about the bloom that comes close to speckling is the thrips-scarring. I was disappointed about this for a while, but I've sort of come around -- at least I like the bloom color, and the leaves are decent: 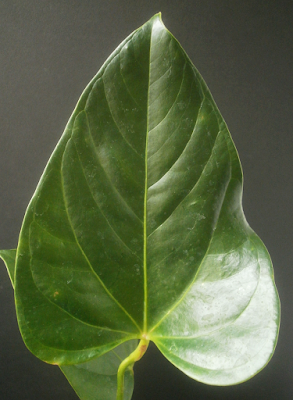 The new leaves are even unusual in a good way: 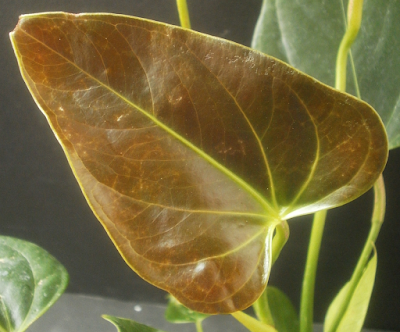 I mean, I get that brown isn't maybe the prettiest color, but it's striking. I've seen worse foliage. 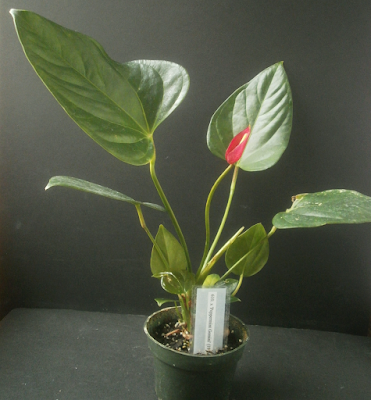 Nina's main flaw is her habit: she flops around a lot when I move her in and out of the tray for photos and waterings. Plants with long internodal distances have this problem a lot -- long internodes mean long stems, and long stems can twist more easily where the stem goes below the soil line -- but in Nina's case, I think it's more a matter of having to share flats with other plants. It's hard to put them all back in exactly the same places, so sometimes plants wind up growing in one direction for a while, and then a different direction, and the stems wind up permanently kinked and flop-prone.

Verdict: keeper, mostly for breeding purposes. Haven't actually been able to pollinate her yet, though.

The camera wanted to make it slightly orange for some reason, but in person this was a bright pure crayony yellow. 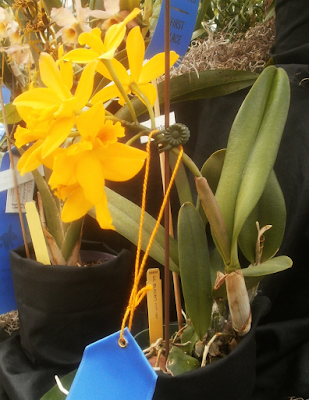 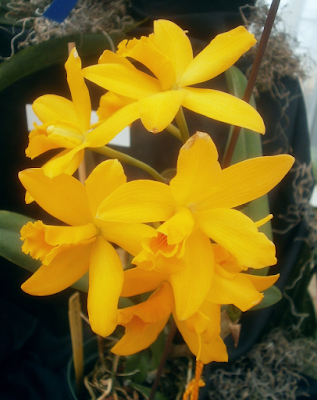 Not much else to say about it; it was nice, but aside from the color, nothing about it was out of the ordinary.

Ctt. Blazing Sun hasn't appeared on the blog before, but it's the grandchild of an orchid that has (Ref.): Ctt. Trick or Treat, which was previously seen in 2012.

ALSO: it's looking like I have many, many more Schlumbergera berries ready than I will ever be able to use, so if any readers are interested in trying to grow some Schlumbergeras from seed, e-mail me (address is in the sidebar; read the instructions) and I can hook you up.