Everything was going fine, and then it was time to dig up the Cannas and bring them in for the winter. And you've seen the Cannas.1

Meanwhile, one of the Leuchtenbergia seedlings has decided to bloom, in the basement, under artificial lights. I'm surprised that this is even possible. 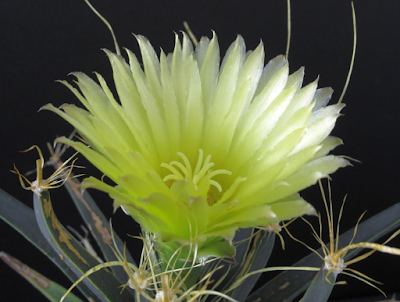 The seedling in question was sown on 8 May 2013, so it's about five and a half years old. In some ways that feels like a really long time to wait for a bloom, and in other ways it feels incredibly fast. (It's not as if Leuchtenbergia is known for its speed.) 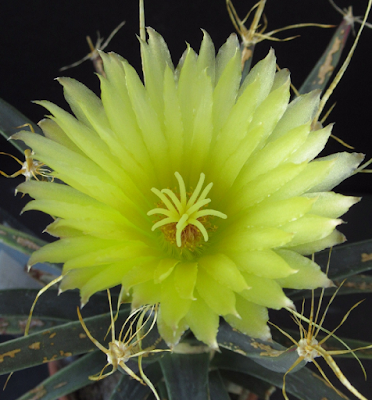 Also, I purchased four kinds of seeds from seedman.com at the beginning of September. Three of them are sort of disappointing. There's nothing at all going on with Chamaedorea cataractum, and one of the six seeds in that package was rotten when it arrived, so I kind of suspect that was wasted money. A few seeds of Ficus religiosa and Ficus benghalensis have germinated, but they're developing slowly and I'm not optimistic about getting actual plants of either one.3

But the fourth one, Zamia furfuracea, is doing more or less what it's supposed to. 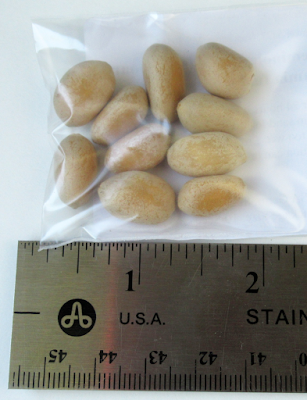 I have germination on eight of the ten seeds so far, and it's only been four or five weeks (the first seed to germinate, photographed below, took 26 days; the package instructions said to allow "several weeks to a few months"), so I'm hopeful about the other two. 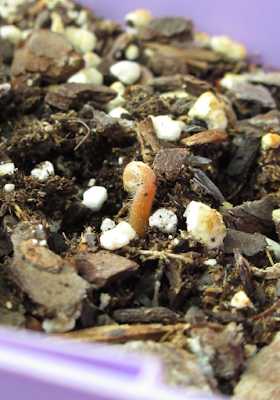 Not that the Zamias are much to look at so far. But still. It's something.

I have no idea when I might get back to regular posting again.


1 (Well, some of the Cannas. There were a lot of Cannas.)
2 Also, this omits a box with about 35-40 lb. of Cannas that we just gave to a total stranger because he stopped at the house and asked. (He knew we had them because we piled all the cut stalks on the curb, in hopes that the city will eventually take them away for us, and the pile was kind of . . . unmissable, I guess is the word.)
3 Though you never know. I tried F. religiosa once many years ago, and got at least one plant that survived long enough to develop some leaves. It didn't transition to a pot well, probably because I was asking it to go too long between waterings. There's probably a reason people don't normally grow these species indoors anyway; I just thought it might be fun to try. (It hasn't been.)
Posted by mr_subjunctive at 3:00 AM 8 comments