Sometimes when I title a post "unpretty pictures," it's a little tongue-in-cheek, and the pictures aren't actually that bad. This is not one of those times, though. 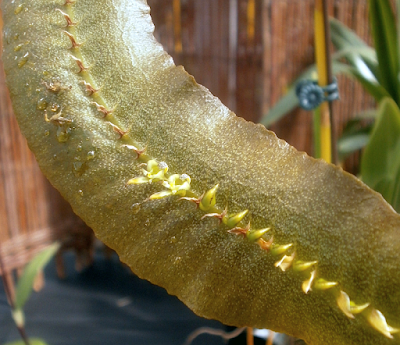 I mean, not that it isn't still interesting. B. pterophyllum is actually sort of fascinating. But pretty it isn't. 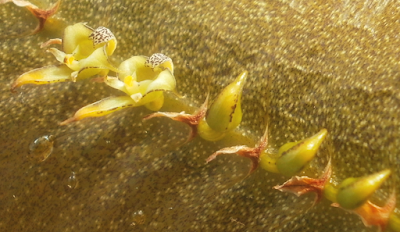 It would be a very long project to try to determine whether this is the single strangest orchid I've ever seen, but it's surely a contender, at least. Sort of like an Epiphyllum, but somehow even uglier. At least Epiphyllum have nice flowers. 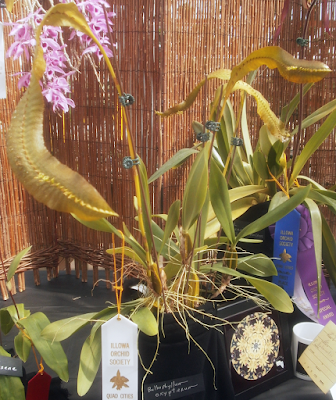 Sure, I've grown and enjoyed plants whose appeal wasn't immediately obvious, but damn.

Hard to come up with a lot to say about 114A: it has longer, narrower petals than average. Pleasant, I guess. I don't know. I'm afraid the most notable thing about it will be how difficult it is to name, but we'll see. 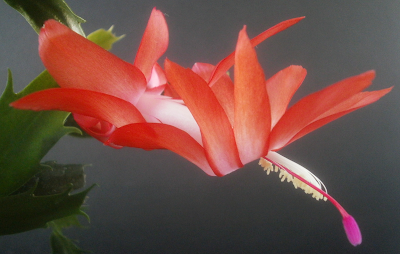 I had 30 TinEye names, which I condensed down to four.1 I wasn't crazy about any of those, so I kind of panicked and threw in three names from the emergency names list (all of which were originally racehorse names, I think). So, seven options overall. Not thrilled about the longer list either, but let's see what we get:

Unsubtle would probably apply equally well to all the Schlumbergeras. Flowers are unsubtle on purpose, to attract pollinators. So yeah, the name technically applies, but it doesn't say anything. Pass.

Francis S. is a sort of indirect reference to someone who was important in my life, and in theory I like the idea of naming seedlings after people I actually know, but if I name a seedling after one person I actually know, then do I have to name seedlings after everyone I've ever met? (Obviously, no, but where do you draw the line, right?) So this is maybe a name that would start me down a slippery slope, and is therefore best avoided.

Copper Kismet has things going for it: it's almost certainly not already in use, it refers to the flower's color, and the alliteration makes it kind of fun to say. On the other hand, it doesn't actually mean anything.

I grew up near, and spent a lot of time in, Fairfield, Iowa, so even if the name isn't especially related to the bloom, there's still a strong pull toward the idea of naming a seedling after the town. The husband (who also has significant connections to Fairfield) says that the ideal color for a Schlumbergera "Fairfield" would be a bright yellow or slightly orangey yellow, though; my own mental associations would color the ideal "Fairfield" white or a very pale yellow. So seedling 114A is in the ballpark, but maybe not the right seedling for the name, which I reluctantly drop. So we're down to three finalists now:

Fervent also appeals for primarily personal reasons, recalling the dog we had briefly before getting Sheba, who we named Fervor. Fervor was only here for four days, but I was pretty intensely upset when my allergies turned out to be bad enough that we had to take him back to the shelter,2 and I still think about him from time to time. And a firey red-orange is one of the more appropriate colors for a word like "Fervent," so it works there too.

The down side: it's a little abstract, and possibly a word people aren't very familiar with. That doesn't always doom a name prospect -- plenty of obscure and non-English names among the seedlings -- but it's something to consider.

Apollo is a lot more familiar, and it's even one letter shorter. Apollo was the Greek god of (among other things) the sun and light in general, so orangey-red is borderline color-appropriate,3 and I think he's one of the nicer Greek gods,4 which is why so many things are named for him already. This is also the down side, as there's a better-than-average chance that a Schlumbergera 'Apollo' already exists, or would by the time I got around to making the name official.

Finally, Gallant Fox, another racehorse name. It's long, but also unlikely to be in use already, color-appropriate,5 and depending on what outfit you imagine a gallant fox wearing, it could even be sort of a pleasant mental image. There's even a very thin Iowa connection, which makes up a bit for dropping "Fairfield." Possible downside: "fox" has taken on some additional meanings lately. 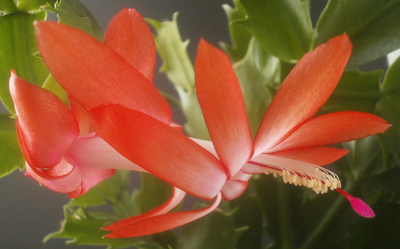 Once again, I slept on the question after narrowing the choices down. The morning after writing the above, I was less enamored of Apollo, considering how many namesakes he has already, but I was completely deadlocked on the other two, so I wound up flipping a coin, which came up Gallant Fox. So there we are.


1 Though I want to give an honorable mention to a fifth, Rebolation. I hadn't heard the word (the name of a Brazilian dance style), and looking into what it was meant that I got to see a lot of videos of people dancing impressively. (Made me think of what you'd get if you crossed Michael Jackson with Michael Flatley.) Turn the sound down on your computer/device and watch this:


Finding out about this sort of random stuff that I would otherwise never have heard of is my main motivation for doing the seedling names the way I am: since TinEye results can be, literally, anything that anybody has decided to take a picture of and upload to Flickr, I almost always wind up learning something about the world by the time I manage to pick out a name, whether that turns out to be Dusty Springfield's sexual orientation, the existence of ginger beer, the German word for lipstick, the Spanish word for "cobra," a new tropical fruit, the name for grooved sections of highway that make growling noises when you drive across them, etc.
2 He got readopted, eventually (not a given: adoption is often slow for gigantic black dogs). Fervor's fine.
3 Again, a golden yellow would probably be a better match to the name.
4 Of course, the benevolence of Greek deities has to be graded on a curve: I don't think any of them were entirely benign. In particular, don't let Apollo challenge you to a musical contest, 'cause that never ends well.
5 Appropriate to "fox," not to the racehorse, who was a bay.
Posted by mr_subjunctive at 3:00 AM 3 comments

Seedling 077A isn't very impressive: just another orange/white, a little smaller than average. It only produced one bloom, which was distorted, unhappy-looking, and not photogenic. I was still happy to see it; it had started a bud at the end of spring 2015, and developed it for quite a while before dropping it at basically the last possible moment. So I knew it was probably going to be an orange, but I'd been in suspense about what kind of orange for about six months. 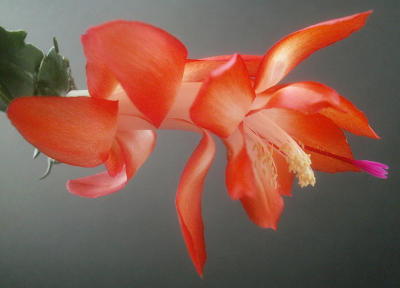 Since the seedling's not that great, the name isn't likely to matter very much, so coming up with a name is relatively low-pressure. I picked 5 potentially acceptable options out of TinEye's original 30.

The bloom has the approximate shape of a Betta; orange isn't a common betta color, but they're out there.
On the down side, it feels like underwater life is pretty well-represented already, with 018A "Nudibranch," 021A "Spider Crab," 025A "Clownfish," and 091A "Flying Fish."

Grendel isn't what you'd call a particularly sympathetic character (though there are other schools of thought), but I could stand to have more literary references.1

Boomerang was previously considered and rejected for seedling 054A "Alberta." There's a slight connection between seedling and name this time, insofar as boomerangs are crooked pieces of wood, and the bloom is sort of distorted and crooked in shape, and boomerangs return when thrown, and this plant's bud "returned" after a several-month delay.

Or perhaps a not-great Patrick Swayze movie is the logical name for a not-great Schlumbergera seedling, in which case Roadhouse.2

Finally, this is the midpoint of this season's first-time blooms: 13 seedlings before it, 12 after it.3 So in a sense, one could say that the Schlumbergeras are hitting their Full Stride, with 077A.

The only two names that interested me after writing that out were Grendel and Boomerang, and after sleeping on the decision for a night, I decided that Grendel was the slightly more interesting of the two, even though Boomerang is a more entertaining word. Therefore, I christen 077A Grendel.


1 The only literary references so far barely qualify: 056A "Demons Begone," 082A "Strawberry Madeleine,", and if comics count, which I'm not sure they should, 113A "Helper Dog."
2 Which I watched on Netflix semi-recently and, in fairness, kind of enjoyed, but I would have enjoyed it just as much with the sound off. (1989 Swayze was pretty.)
3 Though there are four previously-unbloomed seedlings teasing me with some buds as of 19 December -- 003, 058, 204, and 208 -- and I'm expecting at least one of those, probably 208, to produce a full bloom before New Year's.
It would be foolish of me to try to guess what will happen in February/March/April this year, but I will: my guess is that once all the results are in for the year, 077A will wind up being slightly before the middle of the pack.
Posted by mr_subjunctive at 3:00 AM 1 comments