Yeah, okay, so clearly the Leuchtenbergia profile didn't happen yesterday, either. Whoops. I've been trying to take yearbook pictures this week, which involves lots of sweating and lifting. And then it got cold at night on Monday and Tuesday so I had to move some plants inside for the evening and then back out again in the morning, which also involved some sweating and lifting. And then we made a trip into Iowa City, during which I basically just sat in a hot car for three hours, which was much lighter on the lifting, but there was serious sweating. So my point is that I've been exhausted, and maybe even a bit dehydrated.

Meanwhile: an orchid. The background was unfortunate, and confused my camera, but it's lovely all the same. 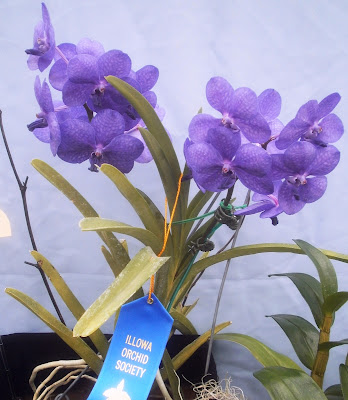 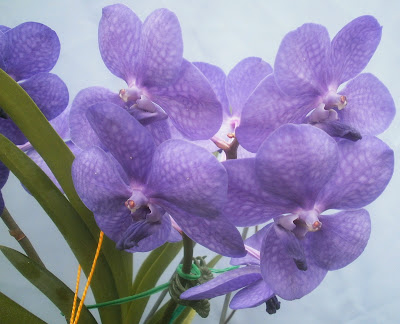 UPDATE: The Leuchtenbergia principis profile has since happened.

Thanks to the generosity of four readers, I now have enough money to buy an entire used computer, and get most of a dental checkup/cleaning. So that's good. (More than just "good," really -- both of those things have been nagging small worries in the back of my mind for a long time, then in the last month or so became screaming huge worries directly in front of my face, so that's a couple fewer things to have to worry about.)

Ordinarily this would call for Gazania photos, Gazanias being the official PATSP flower of celebrations, but I have somehow neglected to take any since the last time there was something to celebrate, so we're going to make do with a double random plant event instead. Which is that two of the Anthurium seedlings really and truly have produced flowers. I've been fooled before, but this time it's real. 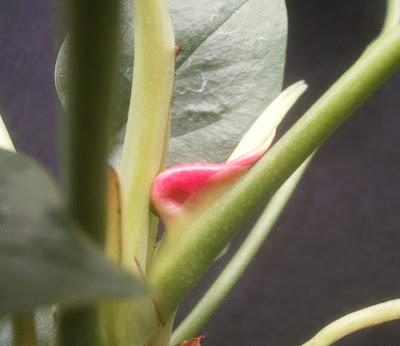 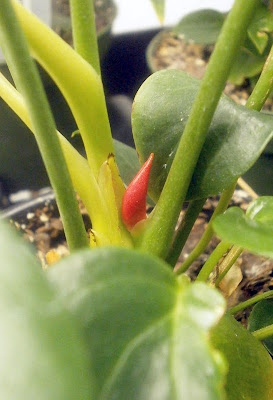 Anthurium seedling #282 ("Dave Trading")
These pictures are a week or two old, because the whole computer-memory issue makes it difficult to upload new pictures, but by now, the flower on #59 ("Bijoux Tuit") is unambiguously a flower, even if the spathe hasn't completely unfurled yet. #282 ("Dave Trading") looks about the same as its picture, so there's still a possibility that I'm misinterpreting something, but I think it's just slower than Bijoux.

I wasn't expecting flowers this soon. Bijoux is only a year and a half old (seed started on 1 February 2012), and Dave is just barely over a year (19 May 2012); most of the information I've run into on-line said I wouldn't see flowers for three years, at the earliest, and maybe I would have to wait five.

I also had kind of hoped that the colors would be different -- they're both basically the same red-pink as 'Gemini.' Bijoux's mother was 'Gemini,' and she looks just like 'Gemini,' from what I've seen so far. Dave's mom was 'White Gemini,' which has white spathes, but 'White Gemini' is a sport of 'Gemini,' hence the name, so it's maybe not surprising that Dave comes out looking like 'Gemini.' Plus it's totally possible that Dave's dad is 'Gemini.' Whenever I see one of the plants shedding pollen, I just kind of randomly go around smearing pollen on every spadix I see, because it's a pretty rare event for one plant to be shedding pollen while another is receptive, and if pollination did take place, it's usually several weeks before it's obvious, so I never know the male parentage for any of these seedlings.

Now that Bijoux and Dave have demonstrated that it's possible, we may be seeing a lot more flowers on the Anthurium seedlings. If so, I hope they start changing up the colors -- if I remember correctly, about 80% of the seedlings are from either 'Gemini' or 'White Gemini,' so it'll be really boring if they all produce identical spathes. But we'll see how it goes. I've got a good feeling about #202 ("Mason Pepperspray") and #46 ("Aurora Boreanaz"): they've both done well enough so far to get moved to 4-inch (10 cm) pots, and their mother is the NOID purple-blooming one.

In my previous post, I said would not be posting over the weekend, because I was trying to get a special post ready for today.

But I have failed.

Some of the problem is that I have almost filled up the memory of my eleven-year-old computer (37.2 GB capacity, 1.51 GB remaining), which makes photo-editing more complicated and time-consuming, for reasons I predict you will not care about. The Iowa City area is pretty much awash in used computers, and I could get a much better one for about $150-200, but at the moment, the money available for this is . . . less than that. So if you've got a large pile of money somewhere, and rolling around naked in it just isn't as exciting as it used to be, and you feel like me having a new (used) computer would make the world a better place, there's a PayPal donation button at the top of the sidebar, on your right, and this would be a better-than-usual time for you to use it.1, 2

Meanwhile, I will keep working on the post. Here's a hint about its topic and format: 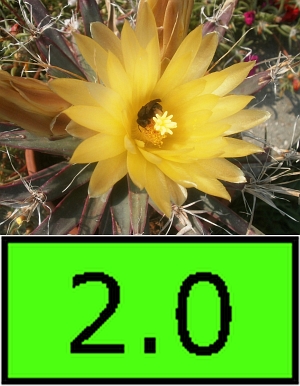 
1 And obviously if you don't have a large pile of money, or rolling naked in it is still enjoyable, or you feel that I'm more likely to use a new computer for evil than for good, don't worry about it. It's not life or death.
2 Funds collected in excess of what I need to get a computer (if any) will go toward: getting my teeth cleaned for the first time in about ten years (which is going to happen whether I can pay for it or not, damn it), a new camera, and potting soil, in approximately that order. The actual sequence will depend on how soon I need potting soil again.
Posted by mr_subjunctive at 3:00 AM 4 comments